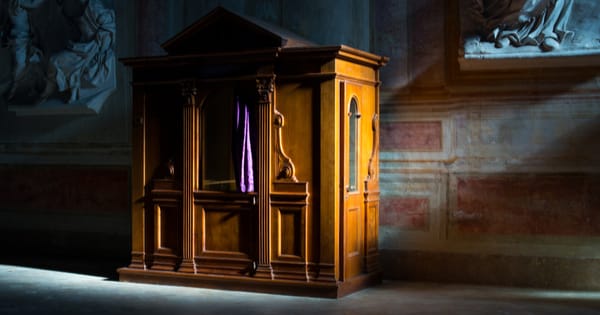 *names have been changed

The ushers had just completed collecting the Sunday offerings. As they carried the money baskets to the back of the church, I saw my chance. Quickly I rose from my seat, walked briskly toward the exit, and left the church.  That was last Sunday.

As I got into my car, I thought of Mom and Dad, and how they certainly would not have approved of my practice of leaving Mass early. My parents were devout Catholics, especially Mom. Mom’s devotion earned her what seemed to us to be a “direct line” to God. Her prayers never seemed to go unanswered. When Mom prayed, God would drop whatever He was doing to listen to her. Unfortunately, that devotion didn’t get passed on to her 2nd oldest child. I just didn’t seem to have what it took.

As I drove home from church, I thought back on those days of having to go to Catechism on Saturday mornings as a young boy, and how much I hated it. As I thought more about it, it seemed to me that the adults who were there to teach us Catechism didn’t like it much either; or maybe they just didn’t like children.  Mrs. Penske, who ran the Saturday Catechism children’s program at our church, was maybe the meanest, most bitter woman I had ever met, at least up to that point in my life, and well before I met my 2nd ex-wife.  Why was she so angry, and why did she have to take it out on us?

Then there was Father Gentry, who was the head priest at our church. It annoyed me how the church attempted to portray him as such a wonderful priest who was beloved by all his parishioners, including the children. The weekly church bulletin would often have pictures of Father Gentry surrounded by smiling children, giving the reader the impression that this was a warm, wonderful man who was loved and admired. But I realize now that that was nothing more than church propaganda. Father Gentry was a cruel, angry old man, and the children disliked him immensely. And we resented having to pose for those pictures, knowing that they were not going to depict him in an honest way.

One Saturday morning as we were lining up to enter our respective Catechism classes, I noticed Father Gentry, angry of course, pushing several children who apparently were not getting into line quickly enough for the good Father. One particular 5th grader, Rueben Puente, got up the nerve to tell Father Gentry that he had no right to push him. Father Gentry responded with an even more aggressive shove. Rueben quickly caught his balance, and instinctively threw a punch that caught Father Gentry square in the face, causing him to stumble. I remember one of my friends whispering “I don’t think we are supposed to punch a priest.” Though that was obvious to us, we still wanted to laugh, or applaud, but instead, we only kept silent, still shocked at what we had just witnessed. Rueben ran off, and Father Gentry was too stunned and slow to give chase. We never again saw our hero Rueben at Catechism. But a few years later, an encounter with Father Gentry would leave a deep impression on me, and help me to realize that it wasn’t just the kids who were wary of this mean-spirited priest.

I was in high school by then. One Saturday evening I agreed to drive Mom to confession. The confessional rooms (there were 2 or 3 rooms situated inside the church) back then had little lights above each of the 3 doors.  If the light was on above the middle door, that indicated that the priest was available to hear your confession.  The lights above the 2 other doors told the sinner that some other sinner was in the confessional, and that he/she would have to wait in line.  Mom and I scoped out each of the 3 confessional rooms and selected the one with the shortest line of sinners.

The confessional rooms really offered very little privacy. It was almost impossible to not hear the conversation between the sinner and the priest. But once inside the confessional room, a lot of us would attempt to whisper our sins, hoping the priest might be equally discreet.

As Mom and I stood in line this particular afternoon, paying little attention to the murmur of the sinner confessing his sins, the priest suddenly blurted out, loud enough for everyone inside the church to hear: “Seven years!! You haven’t been to confession in seven years??”  Mom and I both recognized that voice. It was Father Gentry.

The sinner muttered a brief response which Mom and I could not make out. Whatever he said, Father Gentry was having none of it.  He responded, again loud enough for all inside the church to hear: “For your penance, you will say ten Our Fathers and ten Hail Marys, AND two rosaries!”

I guess I don’t blame Mom for not trying to rescue me. “Save yourself, Mom! At least one of us was spared!” I thought to myself as I walked slowly to my doom.

My focus suddenly turned to the penance that soon would be handed down to me. If I confessed all my sins, how would I ever complete my penance in time for Sunday Mass? I had to think of something. Then it came to me. I would confess half of my sins, and save the other half for the next time.

Now it was my turn to enter the confessional room. At least it had only been several months, and not seven years, since my last confession. But Father Gentry was not impressed. “You need to be going to confession every week!” he declared, loud enough for everyone in the church to hear.

After I had finished confessing half of my sins, it was time for my penance. “Ten Our Fathers and 10 Hail Marys. And a rosary.” Said the mean priest.

“Geez,” I thought, “what kind of grading curve is this? I got almost the same penance as the guy who hadn’t showed up in 7 years! And Father Gentry only knows of half my sins!”

As we left the church that evening, Mom asked how it went. I simply told her that at least I didn’t get the same penance as the 7-year hiatus guy, which was true. She didn’t need to know my exact penance, or that I had only declared half my sins.

That was the last time I went to confession.

Yet I continued going to church, and still do, I think partly because I am trying to reconcile Mom’s unwavering devotion with these other unpleasant experiences.

So, I’m conflicted. I don’t stay for the entire Mass, and I never think about going to confession.

Father Gentry would be quick to pass judgment on me.

Freddy Sepulveda lives in Tucson but grew up on SoCal where many of his relatives still reside. He spent some 40 years in contract negotiations and export administration working for various defense contractors but is now retired.