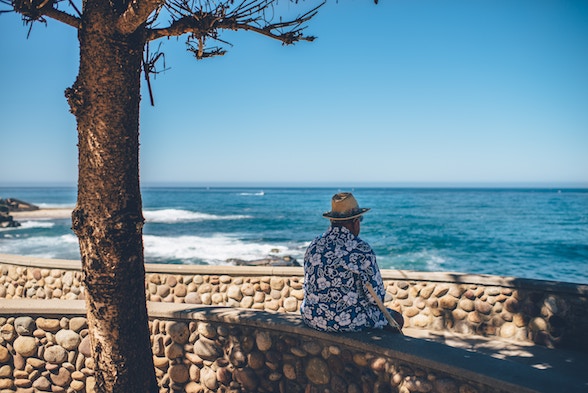 There comes the time when time is both in short and infinite supply. When days last long, though there aren’t many of them left. Why does life play us this way? With youth comes virility, with age comes wisdom.

I suppose it’s better this way with men. We seem required to take boyish risks in order to earn the learned ways. This is the course the universe sets for us. What would the world be with boys that know too much?

It’s no coincidence that men’s skin is thicker. That even into our twilight years, we must shave our faces, removing the fur that covers our jaws, as though the creator is reminding us that we’re nature’s mistake makers. That we are given the privilege to clean up, over and over again.

But does our skin grow thicker over time? No. It thins and weakens like all the parts of our bodies. We’re still vulnerable. We still have feelings. We still need touch and connection.

Following my aunt’s funeral last Christmas, my octogenarian uncle had lost a part of himself. He was silent in those days around her transition from this world to the next. His home was full of family and visitors, food and drink, but after a few days, we all went home. He hadn’t been alone for over 50 years. After many months, he made a friend. A woman. The family went into two camps: one in support of this new friendship, others against.

The third camp, not often visited, is the “let it be” camp. This is one where you can both honor the memories and the present. Where man can be both aged but alive. Where the spirit of manhood still lives, though the mechanics and lubrications have diminished. Where man can live at the edge, but not fall in.

Photo by Ian Schneider on Unsplash

Part 8 of the Stages of Man: Dadlandia

Part 9 of the Stages of Man: Cruise Control