The white man is a low person on the totem pole. Everybody else is above the white man.

There is no doubt that blacks, minorities, and people of color had it rough for many decades. Women, especially in the workplace, had the system tilted against them. We get it… But that was then, and this is now. And two wrongs don’t make a right. The sorry truth is that the pendulum has swung way too far in the other direction.
— Wayne Allen Root, “Why 2016 is the year of the angry white male”

These quotes echo a sentiment I’ve read online and heard from some family and friends: that white males are the true victims in modern America.

According to this narrative, they face more bigotry and discrimination than any other group, and are targets of the most insults and suffering.

Women, blacks, Hispanics, you name it: everybody else has more power and influence than white men.

As a white man, and the father of a white boy hurtling toward manhood, I have to ask: Is it true that white men are discriminated against? That white men don’t have opportunities anymore? That everyone else is running the country?

Census data tells us how many Americans fit the label of “white man.”

The shaded area marks 31%, the white and male portion of America’s population. The chart also marks a smaller number, 24%, who are white, male, and age 18 or older.

If we believe race and gender are truly irrelevant to merit, and if we believe America offers truly equal opportunities to everyone, then we should expect that people in jobs of legal power and cultural influence would resemble the overall population. Groups that face discrimination — such as white men, perhaps?—would have less representation in these jobs.

Let’s take a look at government, law, business, media, and a few other fields.

(Footnotes and data sources below)

Not one of these matches the U.S. population. And this is after decades of increasing diversity. If the theory is that white men are discriminated against, the data is overwhelmingly clear: Right now, white men run America. They still have far more positions of influence than suggested by a level playing field, much less one tilted against them. So, if you’re the father of a white boy, remember: Your white boy today will be a white man tomorrow.

You are raising someone who is more likely to have influence and income throughout life simply for being born with a certain sex organ of a certain color. This isn’t fair, but it is true today and for the near future. 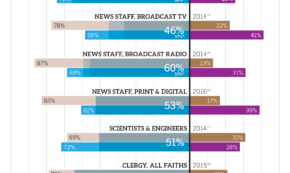 Melanin and genitals are traits, not merits or faults. At birth, they are received through zero effort by the recipient. Without paying attention, it’s easy to overlook white and male as an advantage because it feels like normal life. But one man’s normal is not a reliable measure of other people’s struggles. It is also easy to feel like our identity or work ethic is under attack when someone illuminates our outsized privilege; but the honest response is humility, not denial.

Dads, our influence on our sons’ values will have amplified impact on the world compared to women and minorities. We must teach our sons to value truly equal representation and fair opportunity; to believe people should advance by skill and intelligence, rather than color or sex; to use their privilege as empowerment to “seek justice and help the oppressed,” as the prophet Isaiah wrote.

To quote Spider-Man, “With great power comes great responsibility,” although Jesus said it first: “To those who have been given much, much will be required in return.”

Someday, I’d like our sons to be able to write: Right now, everyone runs America.

Image courtesy of the author

* Racial identification varies among survey data. For example, U.S. Census data considers Hispanic an “ethnicity” separate from “race” (White; Black or African American; Asian; American Indian and Alaska Native; Native Hawaiian and Other Pacific Islander). Other data treats Hispanic as a race alongside White, Black, etc. In addition, some surveys allow indication of single or mixed racial heritage. When possible, the “white” bars in this chart represent white single-race non-Hispanic people, and otherwise accepts each survey’s definition of “white.” In Census data: if we include all white single-race people, Hispanic or not, the white percentage rises from 62% to 74%; the percentage of white males rises from 31% to 36%; and the percentage of white males 18 and older rises from 24% to 28%. Also, Americans of any gender and age whose race is white mixed with another race account for less than 3% of the total population.

** Most of the data represented here used a strictly binary gender scale, without consideration of LGBTQ characteristics.

A. 24% shows the percentage of white single-race non-Hispanic males Americans age 18 and older. The larger number (31%) is the most commonly-cited percentage for white male Americans, but it includes children and teenagers, who are unlikely to hold any of the occupations listed.

Thanks for that info!👏🏼 #Facts

END_OF_DOCUMENT_TOKEN_TO_BE_REPLACED

Facebook169TweetPinEmailShares169
wpDiscuz
Share this ArticleLike this article? Email it to a friend!
Email sent!