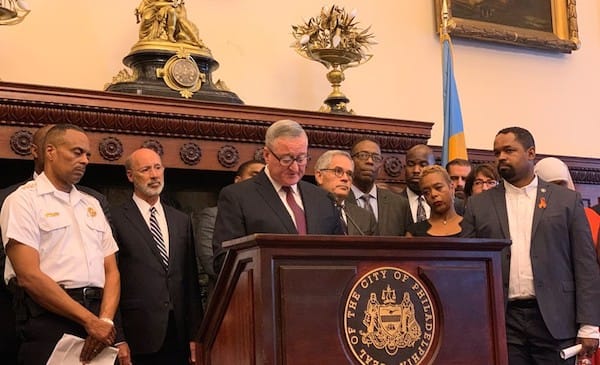 8.16.19: Philadelphia – (Politics): A 2pm press conference at City Hall on Thursday was billed as a briefing on the chaotic North Philadelphia active shooter scene that unfolded over hours on Wednesday and resulted in six cops shot and the successful surrendering of the 36-year-old gunman.

But what actually occurred was a soapbox for local, state and federal Democratic lawmakers to express their understandable frustration with the partisanship that prevents the flourishing of meaningful gun control.

At least two dozen politicians, including the Governor of Pennsylvania and a U.S. Congressman, clustered around the podium in the Mayor’s Reception Room on the second floor of City Hall. Facing them were reams of news cameras, which provided the perfect amplification for a denunciation of assault weapons, like the AR-15 used on Wednesday by Mr. Maurice Hill to fend off police.

“There are a lot of things we need to do … we got to start with figuring out ways to get guns out of the hands of people like the jerk who shot six officers,” said Governor Tom Wolf, who promised an immediate executive order to accomplish such a task.

The governor said the Commonwealth of Pennsylvania will do everything it can to prevent the carnage that has ravaged Philadelphia’s street.

When it was State Senator Sharif Street’s turn at the microphone, he maligned the Commonwealth for not doing nearly enough to prevent gun violence. Mr. Street enumerated bills that had been introduced by his colleagues but which haven’t received a vote, such as a statewide assault weapons ban which was proposed by a legislator from Allegheny County.

“The Commonwealth of Pennsylvania has not done everything it’s supposed to do … we haven’t even come close!” Mr. Street shouted.

Six months ago, the U.S House of Representatives passed the Bipartisan Background Checks Act (H.R. 8) 240 to 190. The bill, which would require background checks on all gun purchases, including at gun shows, has been neglected by the Republican-led U.S Senate.

Senator Bob Casey at Thursday’s press conference called on the U.S. Senate to not only vote on H.R. 8, which the president has threatened to veto, but to embrace the proposition of a ban on military-style assault weapons.

A Fox News poll this week found that 90 percent of Americans support universal background checks, and two-thirds of Americans favor a ban on assault rifles and semi-automatic weapons.

City Council President Darrell Clarke said he’s asking everyone to put aside partisan politics on behalf of the American people.

“It’s too many weapons on the streets of this country,” declared Mr. Clarke of North Philadelphia.

Governor Wolf said that over the last few weeks, he’s noticed a willingness for some on the other side to engage. An anti-gun-violence rally, which was held in Harrisburg last week, saw some Republicans attend, Mr. Wolf said.

Philadelphia mayor Jim Kenney asserted that the active shooter incident in North Philadelphia – for which the gunman will likely face so many charges that he’s unlikely to ever leave prison, the District Attorney said – should never happen in this city or elsewhere. But, unless lawmakers act with urgency, chaos will persist uninterrupted, the mayor implied.

“If we don’t see change, gun violence will continue to ravage our communities and tear families apart. So, I say to our state and federal lawmakers, step up or step aside,” said the mayor.

Facebook6Tweet3PinEmailShares9
wpDiscuz
Share this ArticleLike this article? Email it to a friend!
Email sent!