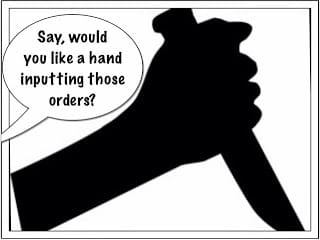 —
Last week the company decided to begin using the new accounting software. As explained in a previous post the former accounting system was actually used by one of the early Chinese Dynasties, I believe it was the Song Dynasty and at the time they felt it “cumbersome, antiquated, with an unfriendly, difficult interface.” They hired a consultant from the Mongol Steppes, named Genghis Khan to help them learn the architecture and abilities of the system. He became so frustrated he conquered all of the world or at least the parts he could reach on horseback.

Anyway, it was clearly time for a change and our software, and accounting people researched many different systems, exploring all of the possibilities, and carefully comparing the benefits, and features, and then decided to purchase the least expensive package, the “1,2,C Platform” from Bob’s House o’ Good Accounting Software. Motto, “If price is your only concern, buy from Bob.”

They spent weeks installing the new software on the computers and training the staff in the use of the many features, and functions. Finally, it was time. Last week “the balloon went up.”

It is an inspirational sight to see a group of people facing a difficult situation, struggling against common odds, and a mutual enemy, and turning on each other like a pack of rabid wolverines.

There is no mistake so bad that it cannot be ameliorated, somewhat, by blaming someone else, venomously, hatefully, with threats of violence.

“Hey, Jill, I think you entered that product code incorrectly. The name should always have a space before the lot number, and the edition size should go in user-definable field 3.”

Grasping a cheap retractable pen in a “modified saber, knife fighting grip” Jill steps closer, while rasping “that’s the way Geoff told me to enter all of the products that are being made available in the fall line, that rat ba$tard, @!#$$ of a @$#@#@$, he can ki$$ my a$$, and so can you!”

“OK, that’s good,” you scream while moving quickly to the men’s room, hoping she is not angry enough to follow you in there.

Shortly after any change as difficult and important as a major software update, waves of nostalgia will sweep through the office. People will begin to dress in black and wipe away tears while discussing the many, almost uncountable, advantages of the old way while leaving hateful, anonymous post-it notes everywhere. “Next time you fall asleep at your desk I will cut your throat.” or “Do you know where your cat is?” maybe “I ate your lunch, sorry about that, but it was delicious.” Ok, that last one happens all the time around here and has forced many of us to bring crappy lunches.

Soon this will pass, and everybody will be back to their normal, lunch stealing selves. Progress, in all of its jackbooted glory, marches on, and if you are lucky it will not trample you.

A version of this post was previously published on Tim-thingsastheyare.blogspot.com and is republished here with permission from the author.
—