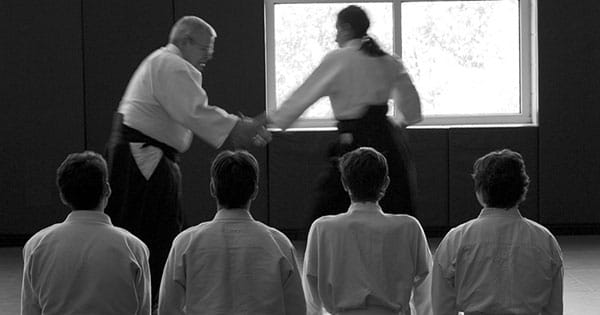 I’ve long been intrigued by the martial art of aikido. While I’ve never sought to become formally trained in the art, for years I’ve heard people occasionally reference its philosophy of redirecting an opponent’s energy. For me, this was always the most interesting and appealing concept.

Side note: I must admit I’ve indulged in the guilty pleasure of watching Steven Seagal utilize a more aggressive form of the art in his films (though in real life he’s apparently a high-level aikido practitioner). But that embarrassing detail is not really relevant to this article.

Do No Harm, Even to Those Who Seek to Harm You

Diving deeper into the history of aikido, I discovered more about its founder, Morihei Ueshiba. Referred to as “Osensei” (“great teacher”) by aikido practitioners, Ueshiba created his martial art in the early 20th century. Osensei said he was inspired by a series of spiritual revelations. These experiences convinced him the true way of the warrior is to prevent violence. This is reflected in the word aikido, which means “way of spiritual harmony.”

Above all, aikido is founded on the principle that one should not seek to harm or destroy one’s attacker. This laudable goal, of course, has parallels in the non-violent philosophies of Mahatma Gandhi and Martin Luther King, Jr., among others. Aikido teaches that we can choose to rise above the disharmony of violence. We don’t have to resort to similar violence when attacked by others. We can redirect negative energy back toward the positive energy of peace.

I firmly believe the path to healing today’s cultural and political divides lies in the application of what I call “social aikido.” I am far from alone in this belief. As Barack Obama is fond of saying, “when they go low, we go high.” We can stand firm in our beliefs, and resist forces and systems of oppression, without resorting to the same tactics that are eroding our social cohesion.

If we allow ourselves to admit the truth we all feel deep within, we all know instinctually that violence only perpetuates violence. Whether it’s physical or verbal, violence toward others does not solve problems. Like all emotional contagion, negative emotions—and the resulting behaviors and actions— spread like a virus. If we aren’t careful, we can easily propagate the sickness of disharmony among our fellow human beings.

Biologically, we are wired to mirror the behaviors of others. This evolutionary development arose as a defense mechanism to promote the community connections that increase the likelihood of survival. However, we also evolved to be highly vigilant for sources of danger, which can include our fellow homo sapiens.

Therefore, whatever we send out into the world is what we will get back from the world. This makes it vital for us to choose non-violence to create a more peaceful world. This is part of the essence of non-violent communication (NVC), a concept created by Marshall Rosenberg. NVC echoes aikido in that it stresses avoidance of harm to others. Rosenberg’s concept requires us to re-examine the unconscious judgments and dominating tendencies in our speech, which we’ve inherited from our upbringing and experiences.

Any change in life must start with our beliefs and behavior. Change cannot happen if we have the same old thoughts and actions. For example, if you want to transform your health for the better, you must shift from a sedentary lifestyle habit to one of regular exercise. This change often requires a new, positive outlook toward yourself and the activity of working out. For instance, those who continue to think of themselves as “destined” to be unhealthy, or who stubbornly consider exercise as a chore interrupting their TV time, generally have a much harder time improving their health.

Similarly, we need people like you to change and step off the path of least resistance, which teaches us to lash out in knee-jerk reactions towards those who wrong us. Yes, it’s tempting to use the same tactics of those who attack us. But this will only continue to degrade the social bonds that have served humanity for millennia.

We need more people willing to exercise enough self-awareness to remember the lesson of aikido: you cannot create peace with violence. Only harmony creates harmony. Through the practice of social aikido, we can more strongly influence others through our deeds, which can be much more powerful than words. We can set a better example, and start a trend back to a more civil society.

Facebook54TweetPinEmailShares54
wpDiscuz
0
0
Would love your thoughts, please comment.x
()
x
| Reply
Share this ArticleLike this article? Email it to a friend!
Email sent!