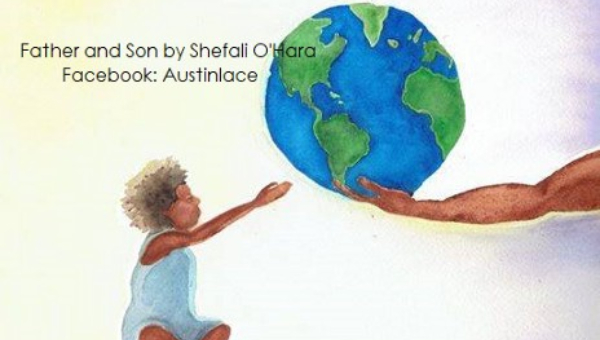 I chose the painting above for a reason. It’s entitled “Father and Son” and I painted it to celebrate the gifts a father gives his child, and to show how important a father is. However, it can also be entitled “God and Child”.

Some people might object because, at least in the West, God is always featured as a white man. But no where in the Bible does it say this is what God looks like.

When we insist God must look a certain way, are we hewing to Biblical truths, or showing our residual racism?

In Genesis it says God created Adam and Eve. It does not tell us what they looked like. Maybe they were blond haired and blue eyed. Maybe they were Semitic, or black. The thing is, we weren’t there. We don’t know.

What we do know is that God created us in His image. It says that right there, in black and white.

And all of us are in God’s image. Every one of us.

God is the ultimate artist. He is the ultimate creative. Not for Him a cookie cutter. He created, by some estimates, 18,000 species of birds. And who knows how many varieties of plants? Does He not delight, then, in the variety of humanity?

He created mankind to be in a relationship of love and harmony with Him, with each other and with the rest of His creation. He loves us in all our diversity. Despite the differences between us, we are all created in His image.

So, if we are all in His image, why can’t we envision Him as a black man, or a Native American?

Furthermore, could God be represented as a woman? I realize this may sound outrageous, but… while I see God as my Heavenly Father, and that is how I visualize Him, I have friends who have had problematic relationships with their father. When they imagine a loving God, She wears a feminine face.

When I first heard of that, I was startled and a bit bemused. But then I thought about it some more, and I realized — why not?

In Genesis 1:27 it says “God created man in his own image… male and female He created them.”

I understand God to encompass all human traits — both the masculine and the feminine. So a vision of God only as a man does not encompass the whole story. He created both genders in His image.

The reality is that God is not restricted the way we mortals are. I am a short Asian woman. I am restricted to a particular physical body. But God is not.

When we create images of God, they are artistic representations. Who has actually seen the face of God? Moses did. But who among us has?

I’m not a theologian, and the last thing I want to do is to go against what the Bible teaches. However, I think the most important lessons we learn from reading the Bible is that God loves us, He forgives us of our sins, and He wants to have a relationship with us. He wants us to love Him and love each other.

If having diverse representations of God erases barriers and allows people to more easily be in relationship with Him, then I think that is a good thing.