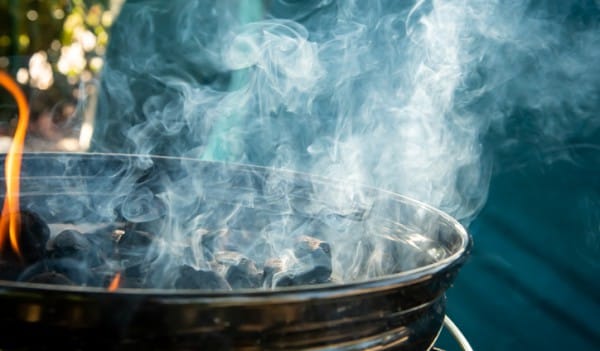 A charcoal grill is a man’s tool. Using fire and red hot, ash covered embers to cook raw meat, char sliced vegetables, and toast frozen garlic bread is a sacred rite. Billowing smoke and the smell of seared food is a time machine, transporting the tong bearer back to ancient times, when man used his barbecue fork to hunt and kill his own steak, or burgers, or bratwurst.

Times were a lot tougher in those days, roving packs of spicy sausages would wait in ambush for an unsuspecting lower middle class, blue collar, or in some cases line supervisory personnel. For many years it was uncertain which species would survive and which would fade into insignificance.

For years the battle raged on, and on, hunter, hunted, sausages, grill owners, entire villages were laid bare, and several unique cultures disappeared so completely that their favorite desserts are unknown, even today. It was a bitter, awful fight that seemed like it would go on forever. 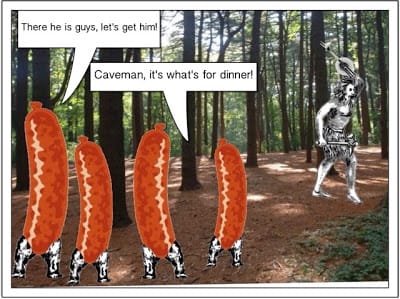 Man would venture into the wilds, armed only with a two pronged fork, and a war hammer fashioned from a branch, a rock and some twine that grew wild on the now extinct cotton string tree in pursuit of dinner. Too often he would not return. When the family went to look for him they would find only his skirt (yes men wore skirts in those days, and they could be quite festive, depending on the occasion, but for hunting they preferred your earth tones, or a simple nature inspired pattern… well, it doesn’t matter what they wore), his fork and a trampled box of wooden, strike anywhere kitchen matches.

For a long time it seemed like the two mortal enemies would battle until the end of time. Rapid advances in refrigeration, seasonings, disposable lighters, and charcoal technologies gave humanity the upper hand. Next time you are trying to decide what to have for dinner, reach back, call on the primal urges that are hidden deep under your civilized veneer, grab a beer and throw something on the grill. Resist the urge to put on a skirt, though, we are not animals, after all.

This post was previously published on Life Explained and is republished here with permission from the author.