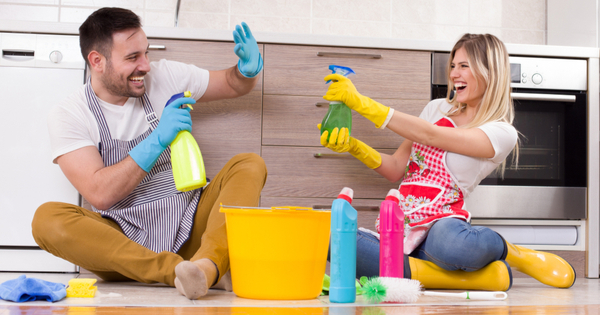 Back in 2008, Time Magazine’s cover story was on the Chore Wars and the ongoing relationship battle of who does what around the house. Over ten years later, nothing seems to have improved and marriages aren’t only suffering but ending because of it. A recent piece in the New York Times, What ‘Good’ Dads Get Away With, is just one of the myriad discussions of how household labor is divided. Or, more to the point, not divided.

There are multitudinous articles, books, and Facebook posts devoted to this lack of equity, so something must be afoot. Back in the “good old days”, roles seemed to be simplified. Men worked outside the home—both to earn a paycheck and to take care of exterior household jobs. Women had primary responsibility for the children and interior domestic chores. Whether anyone then thought in terms of “fairness and equity” is both unknown and ultimately irrelevant.

Right now, resentment and defensiveness seem to be the prominent reactions. More homes have both adults working full-time, or more, outside the home but the laundry, childcare, and food provision still must go on. Women feel they’re being taken advantage of and men feel attacked. Not a recipe for peace and harmony.

Maybe, the blame lies at the feet of the old Enjoli perfume commercial where women could “bring home the bacon, fry it up in the pan, and never, ever let you forget you’re a man.” But when has advertising been about reality?

I think a big part of the problem is how the issue is framed. In the New York Times article, it is presented as “Why are their partners (husbands) failing to pitch in more?” (emphasis mine). This concept often takes the form of guys being “asked to help”. You can no more “help” around your own house than you can “babysit” your own children. But when things get phrased in the form of a question, – ”Will you help?” – “no” is seen as a legitimate answer. If it isn’t acceptable, a different approach is required.

If the chores are being divvied up in a way that one of the partners feels overburdened and resentful, it’s important to ask how this came about. Why does one partner believe they are doing more? Is this true, or a perception? If it’s true, how did this pattern get established? (Spoiler alert—you’re both responsible.)

Since most people these days don’t move directly from their family home into co-habiting, each partner has spent some time on their own. This means time taking care of themselves, their financial obligations, and their households. So, if both partners have been managing their own business, what explains the domestic challenges once they move in together? Do men suddenly become incompetent? If you buy the argument put forth in the NY Times article, their latent entitlement kicks in. This supposedly brings up some bad feelings but apparently not enough to do their “fair” share.

Instead, I believe the root of the problem is two-fold: different expectations and lack of productive communication. We all fall somewhere on the neatness spectrum and this is where the problem starts. What you each did in your own place (and how the home you grew up in was run) is your normal. You bring the expectation that this will remain how it’s done to your joint home. You assume your partner will share your domestic priorities and habits (or lack of them) and are shocked when this doesn’t happen.

Instead of sitting down and having a calm conversation about what matters to each of you and how to incorporate that into a plan you both agree to and implement, the arguments, finger-pointing, and resentment begin. Complaining turns to criticism which often leads to character assassination.

Take a breath. And a time out.

You’re partners and teammates. Act like it. Recognize you will only “win” if you work together.

If one of you thinks there is a problem, there is. You can go down the rabbit hole of whether it’s true or who is more at fault, or you can find a solution that works for you both. This requires each of you to own your part and take responsibility for making it better.

The Chore Wars is merely one relationship area where you each are challenged to negotiate and make room for each other. It happens to be a hot topic right now, but it’s one you can cool down by stepping up.