A woman asks Eli and Josie for help in convincing her boyfriend that she truly does love him.

Author’s Note: This question is a follow-up to a post we ran a while back, featuring a question from a man who recently fell in love with a woman he felt unworthy of. You can read the earlier post here.

Dear Sexes: I’m the girlfriend of the “I’m Not Worthy Of Her” guy, and while he appears to now finally believe that I honestly do adore him, I have to ask: do you have any advice for me? How can I best handle his self-loathing just for myself, and what can I do for him to help? We actually have been doing some of the things you suggested, before the post even went up—laying things out as logically as possible, playing the compliments game, etc.— but it’s not working as well as I’d like.

She Said: I’m so glad you wrote to us, it’s great to hear your side of this story, too. I can imagine how frustrating it must be to have your love challenged and questioned by someone who simply doesn’t believe you.

I think the not-so-sexy answer here is that it’s going to take time, and a lot of work on your boyfriend’s part. I know it’d be great if I could just give you some hot tips to make him feel your love more profoundly, but this isn’t a magic bullet. I know you’ve been trying, and I think that’s what really matters most.

This is pure speculation, but there may be temptation on your part to put up with a lot of crap from him—-bad behavior, sulking or moping, even emotional threats—-as a way to “prove” your love or devotion. He may not know he’s doing it (or he may not be doing it at all, it’s just a guess), but make sure you’re not falling into a trap where you believe your self-sacrifice will lead him to security. That’s just not how it works.

That doesn’t mean you should give up on him if he isn’t exactly where you want him to be. Not in the slightest. Just be clear by saying things like, “I really love you, but what you’re doing right now isn’t healthy for us.” Then take a walk or get some space so you can come back together at a time when you can both talk rationally.

As far as building his sense of security? Explain that every day you’re together and working as partners on this challenge shows your love. Encourage him to seek out or keep working with a great therapist or other support system (like a rabbi or pastor, etc).

This is a great idea for any couple, regardless of self-esteem issues: Write little love notes he can find when you’re not around. There’s nothing more awesome then reaching into your pants pocket, wallet or lunch bag and finding a post-it with a heart or an “xo” or personal message written on it. He can stash it in his wallet and look at it whenever he wants a boost.

Hope you two continue to grow closer, and that your boyfriend makes great strides with his self-esteem issues. He must be great, since you love him so much.

He Said: Thanks for following up with us! It’s great that you are so devoted to working through these challenges. In order to best help your boyfriend, shower him with encouragement, honesty, and patience. Obviously, he needs your encouragement, so he can have a chance to feel better about himself, and his value in the relationship. So the compliment game may eventually work its magic, if you persist. In an ideal situation, your boyfriend would even be able to compliment himself, because it’s really him who needs to believe in his own goodness.

Your honesty (with discretion) will also be important for your boyfriend’s growth. There’s a fine line between encouraging your boyfriend to see his goodness, and enabling his own self-loathing, through constant (and sometimes fake) cheerleading. When your boyfriend’s feeling down, try to pick him up, by pointing out the things you love about him. But if he refuses to believe you, let him know he’s sabotaging himself. He needs to start listening better, because ultimately, you can only give so much of yourself (before you start feeling drained), regardless of how much you love him.

And of course, you’ll have to be patient, because your boyfriend is not likely to make such remarkable changes overnight. Such things take time – however much time you want/choose to devote to helping your boyfriend (and your relationship).

Do you have a question for Eli and Josie? Ask it here!

Originally appeared at She Said He Said

About She Said He Said

Eli and Josie, friends since college, realized how lucky they were to have one another—an honest friend of the opposite sex who tells it like it is. They wanted to share that with the world and so www.shesaidhesaid.me was born.

I love her and I try to show her my affection in everything I do. She is in my thoughts all day long. I remember her name before I end my day with her name. Have expressed my love for her at times we are together. When I say her my feelings in person, she just look at me and say nothing. and when I do the same over phone or text she says “Pls dont”. and now she is trying to keep a distance from me. She found reasons to stay away from me which I don’t even know.… Read more »

Hi, I am recently dating this guy who helped me out of this relationship where I was being sexually harassed. But the problem is he does not believe that I truly care about him, I would do anything for him to see how much I love him but since my last relationship I have become physically and mentally distant I worry that I have made another wrong choice or I am ruining the man I love with someone like me. He says my hugs have become awkward and when he looks into my eyes he does not see the love… Read more »

SSHS, I appreciate your question so much: I think I’ve been in a similar position to your boyfriend, and I know it was a strain on my ex. I was aware of it then, and the anguish of the break-up has driven it home that I need to do my own work around my self-worth issues. I continually looked for her to validate me, and that concealed the work that needed to be done. There’s only so much you can do for your beau, so I hope you have a few good boundaries around self-love and acceptance. Eventually, if he… Read more »

I wish I would have seen this last May. Morgan I completely know the feeling. Thanks for sharing. 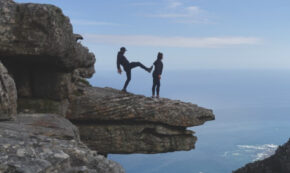 FacebookTweetPinEmailShares63
wpDiscuz
4
0
Would love your thoughts, please comment.x
()
x
| Reply
Share this ArticleLike this article? Email it to a friend!
Email sent!