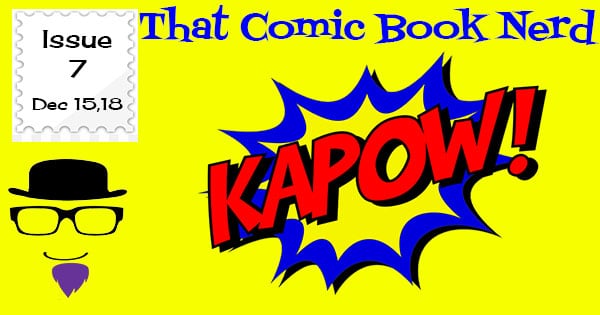 Ben Grimm, A.K.A. The Thing from The Fantastic Four is finally tying the knot. That should be good news for anyone reading this who thinks they can’t find love. I mean, if a big, clumsy guy made of rocks can find love, why can’t any of the rest of us, right?

True, his bride to be. Alicia is blind, but she can feel with her hands, so she knows what she’s getting. Fingers crossed for the rest of us and raise a glass as we share a toast to finding true love!

Speaking of finding true love, comic books are keeping up with the times and giving us characters that are both straight and are LGB (no T at this point), which isn’t necessarily a bad thing no matter your viewpoint on sexuality.

We’re a few weeks away from 2019 and almost every female superhero still has enormous breasts just like in the 60’s, so seeing a real shift in the way our heroes are written is good and provides role models for the nerds that have cone out or are thinking about how to come out.

Iceman, Bobby Drake, talks about the difficulty in coming out to his parents. Batgirl, Barbara Gordon, is in and out of relationships with women because it’s hard being in a relationship and being a superhero.

Diversity in comic books, as in life, is a good thing and I’m looking forward to seeing what they give us next.

It was a very full inbox this week that included something from the past that I ordered (the last on the list). Congrats to Indie favorites Zenescope and Dynamite who together outnumbered Marvel or DC. Don’t forget about the independent brands. They have amazing writing and amazing characters.

Skottie Young, the legendary comic book writer and illustrator behind Deadpool and I Hate Fairyland has created a great series with a message in Bully Wars.

Rufus was the biggest bully at his school in Rottenville. But now its time for high school and on the first day he becomes the bullied instead of the bully. Finding out about a Hunger Games-esque contest (put on by the football coach) known as The Bully Wars, Rufus is forced to turn to the geeks he bullied in order to survive the Wars.

Issue #4 brings us the beginning of the Bully Wars and Rufus still isn’t sure he can trust the geeks he enlisted to help him, but he has little choice considering the size and strength of the bullies he’s up against.

Brilliantly drawn and well written, this is a series that as a parent and a former hockey coach I can really get into. Also, I’ve not talked about it here, but as a high-functioning autistic with Asperger’s Syndrome, I’ve dealt with bullying both as a child and adult.

To me, this is one of those rare comic books that’s both great to read and teaches some great life lessons along the way. My suggestion to you is to get to your local comic shop, grab the first four issues and add this series to your pull list. Chances are, you won’t be sorry that you did.

The She-Devil with a sword who hails from the land of Hyrkania is the model for all female fantasy characters that came after her. Wearing her trademark chainmail bikini, which we all know will stop any sword or arrow that comes her way, she will fight anyone, living or undead. Sonja’s bikini may not be the protection she needs, but it’s served her well over the years and probably brought in a few readers along the way.

Longing to fight and drink mead, she is the toughest, most feared fighter in all the kingdoms. In her latest story, she fights her nemesis a powerful wizard who is trying to take over the neighboring kingdom of Meru.

Always looking for a fight, Sonja jumps into the fray, helping out her wizard friend Max and helping them both get sent through a portal to modern day New York. They later return with the help of another Hyrkanian hiding on earth, but is it too late?

Pick up the latest Red Sonja series from Dynamite, or any Red Sonja series for that matter. And yes, the chain-mail bikini isn’t hard on the eyes, but the writing and storytelling in this series are what brings me back month after month.

As 2019 comes to a close and I look forward to what 2019 will bring both the world of comic books and this column, I’m excited. I love being a comic book nerd and wear that badge proudly.

I’m toying with the idea of a weekly podcast, am contemplating the idea of taking this column into a full blown website where there will be more reviews, news and good stuff and I’m excited to keep sharing with you the many different worlds and stories that are written for us month after month to entertain and occasionally remind us of a life lesson along the way.

By the time Issue #8 of this column comes out, I will have sat in a leather recliner at my favorite theatre and watched the new Aquaman movie—already have my tickets—and I’m beyond pumped for that.

My tastes in comic books tend to run a bot all over the place. Of course I enjoy the classics such as Superman, Batman, Spider-Man and Fantastic Four, but I’ve really fallen in love with characters like Red Sonja and Vampirella from Dynamite and so many from Zenescope in including Skye Mathers, Alice & Calie Liddle (Alice in Wonderland), Robyn Hood, and vampire hunter Liesel Van Helsing.

There are great characters at all companies and that’s why I constantly encourage you to get to your local comic book shop, peruse their wares, take advantage of their knowledge and let them help you find something you like.

I’d also love to get your feedback. Do you agree with my reviews and comments? Do you have different opinions? Different favorite characters? A different outlook on comic books in general?

Share your opinions in the comments section or better yet, submit a piece to Good Men Project of your own!

Until next week, I’ll see you at the comic book store.
—
However, you engage with The Good Men Project—you can help lead this conversation about the changing roles of men in the 21st century. Join us!

Facebook2Tweet3PinEmailShares5
wpDiscuz
0
0
Would love your thoughts, please comment.x
()
x
| Reply
Share this ArticleLike this article? Email it to a friend!
Email sent!