Get Daily Email
Join/Login CLOSE
Home / Featured Content / If You Have Not Yet Heard of Extinction Rebellion, Get Ready 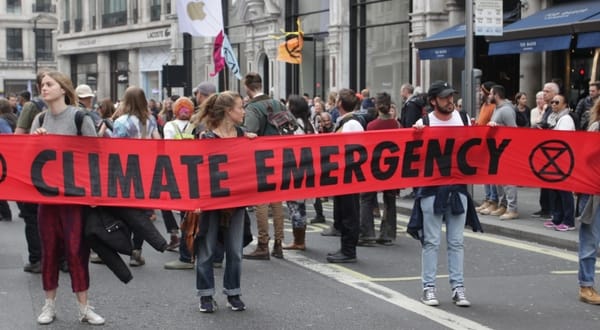 —
Extinction Rebellion, abbreviated as XR, is a peaceful activism movement with a logo that is becoming iconic, which seeks to influence global environmental policies to minimize climate change and decrease the likelihood of an upcoming human extinction event.

He was born in the United Kingdom in May 2018 after a declaration of principles signed by almost one hundred intellectuals, scientists and public figures of highly recommended reading claiming a credible plan for the rapid total decarbonization of the economy in 2025, that governments tell the truth to its citizens, and the establishment of a participatory democracy. At the moment, in addition to the United Kingdom, where they are being especially active, they have local chapters in Germany, Australia, Belgium, Canada, Denmark, Spain, the United States, the Netherlands, Italy, France, Norway, New Zealand, South Africa and Switzerland, and have an open call for participation in other countries.

The movement tunes in with others who are also very active like the young students of Climate Strike, has received the support of Greta Thunberg, and you can prepare yourself to see them at some point in your country. It is the logical consequence of the breaking of the social contract due to the inaction of some governments that either do nothing at all claiming that the possible actions are impossible, or propose solutions in completely absurd terms that would not arrive in time to solve anything.

Reaching the goal of decarbonising the economy in 2025 would mean removing 38 million diesel and gasoline vehicles from the roads and disconnecting 26 million gas boilers in six years. The Energy & Climate Intelligence Unit considers that these demands are an ambition that, in terms of timeframe and from a technical, economic and statistical point of view, have absolutely no possibility of being fulfilled, but even so, it supports the movement and its actions as a form of activism. In many ways, the movement has a radical claiming character, in a way ” let’s be realistic: let’s ask for the impossible“, But that does not make it any less interesting, or less necessary. Idealist yes, but a decidedly serious movement, with strong and important very authoritative voices that support it, and with a fundamental importance at the time of contributing to the mentalization of many.

Ecological activism has moved on to its next phase, and will enter the political agenda yes or yes. The deniers and the irresponsible are going to have less and less space. Be responsible and find out what is happening, its importance and its size. Shake off dandruff, cuñadismo and disinformation. Increasingly, we are going to see the development and growth of movements such as Extinction Rebellion, Plan B Earth or Climate Strike in all countries, as evidences of what is happening grow and become more evident. Politicians and managers who decide to continue to undervalue or ignore it in their programs, can already think about the consequences.

—
This post was previously published on www.enriquedans.com and is republished here with permission from the author.
—
Photo credit: Shutterstock