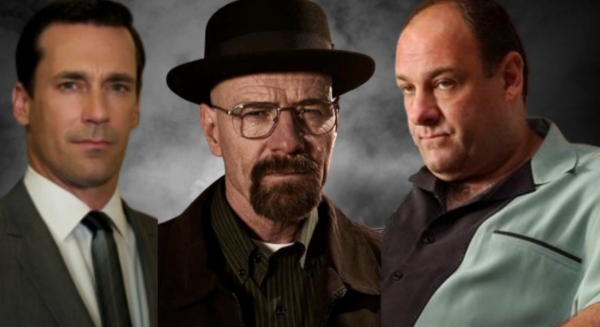 They’re not perfect, but they’re human. Starting with Soprano, the protagonist of a deeply flawed hero was made. But the other side of them is that they are manipulators, murderers, rapists, and simply put: monsters. While they’re compelling characters who we should humanize, trying to be Don Draper, Tony Soprano, or Walter White sets a negative example of where we want society to be. What makes them so compelling is all three had a lot of problems that we can relate to, but excusing their actions certainly does set a bad precedent.

When I was in high school, Mad Men was the first of the three legendary TV shows I watched. And at that time, I looked up to Don Draper. I knew if I felt the way I did, other people certainly did as well — after all, Don Draper is charismatic. He is confident. He is handsome. He is powerful and successful. In the show, he binge drinks, chain-smokes, and treats everyone around him like discardable tools, and suffers almost no consequences in doing so. I was a socially awkward kid in high school who felt nervous whenever there was a five-second pause in conversation — I thought I could take away the good, but not absorb the bad that came with being Don Draper.

There’s a part of us that will always aspire to power and success. For every person who preaches on the problematic ills of trying to be one of these anti-heroes, there are countless more who will watch Breaking Bad, Mad Men, or The Sopranos and want to be one of the protagonists. But we have to acknowledge how fleeting the happiness of being Draper, Soprano, or Walter White truly is. Marc Etienne at Ask Men notes everyone wants to be Don Draper, except for Don Draper. On the outside, Draper seems to have it all — he has a nice house, nice car, beautiful wife, and his kids go to good schools. He might be the epitome of advertising’s ideal for masculinity in the 1950s, a self-made man who worked and hustled his way out of poverty and obscurity and into fame, wealth and success.

But Don Draper is also deeply insecure. He deals with the childhood trauma of being an orphan, growing up in a brothel, and having a grown woman take his virginity at 14. Don is constantly trying to escape his present circumstances, both literally and metaphorically. He constantly misses work to go on adventures seeking spiritual awakenings. He doesn’t spend time with his children. He escapes his own identity as an orphan being raised in a brothel in the midwest.

To some, Don Draper seems perfect — but it seems like he’s always trying to escape the constraints of that perfect ideal.
All three men are also white, which seems to be a minor part of every show, but actually plays out in brilliant ways. Tony Soprano and the rest of the mob inflict violence and commit crimes with impunity, scapegoating “unidentified Black males” for their killings and beatings. Race certainly factors into the lack of accountability Walter White and Don Draper suffer, but again, it’s important to note none of the characters find fulfilling validation and happiness out of their ways of life. They’re suffocated, and I see many parallels in all three characters to D’Angelo Barksdale, a protagonist in The Wire who was born into a drug empire in West Baltimore:

“You grow up in this shit..All my people, man — my father, my uncles, my cousins — it’s just what we do. You just live with this shit until you can’t breathe no more. I swear to God, I was courtside for eight months, and I was freer in jail than I was at home.”

So not only is trying to be a monster in Draper, Soprano, or Walter White just wrong, but it’s not a sustainable path forward. I love many people who have done terrible things. After all, I’m no saint myself and as a Christian, I have to look at my sin before I judge others. If I knew Don Draper, Tony Soprano, or Walter White in real life, I would probably like them and relate to them. But trying to be them is an entirely different story.

It’s clear from watching all three shows that the protagonists are all deeply insecure men, compensating for their insecurity through being a mafia boss, ad executive, or high school teacher turned meth kingpin. Of course, to a large degree, it feels like each character fell into their role and profession in the show out of determinism and the universe moving against them.

After all, what was Walter White supposed to do? Roll over, die slowly from cancer and pray his savings would provide for his family, and just hope his son with cerebral palsy would be okay? What was Don Draper supposed to do? Take his dead lieutenant’s name and identity and not try to make something of himself? And what was Tony Soprano supposed to do? Have a legitimate and benevolent job when all he knew was the mob?

Most people probably would have made better decisions with their lives. But the power of all three shows is that they force us to reserve judgment and see that somehow, in some way, all three men were pushed into the lives they eventually had.

All three feel more trapped in their roles than out of them. Internally, they are not doing well. Tony Soprano acknowledges there are only two futures for someone like him — in prison or in the grave. Walter White is constantly insecure about challenges to his drug-dealing enterprise. Don Draper seeks therapy in every product he advertises, every affair he has, every new venture in his business, only to find himself completely unfulfilled after he achieves his version of success.

It only seems cool to be Don Draper, Walter White, or Tony Soprano from the outside as they embody society’s ideal of toxic masculinity. To actually be them, though? It’s torture, constantly being trapped in quicksand and never actually getting out.

It’s time to stop idolizing monsters because it’s certainly not much fun being one.

Photo credit: Photo created by the author on Canva Pro, all photos originally from Wikipedia Commons

Our culture has an unhealthy fixation on the mythical outlaw figure. Perhaps it’s an offshoot of our homegrown Old West mythology, where we idolize the “rugged individuals” that get away with murder, literal or otherwise. It’s similar to writers romanticizing the tragic lives of great authors of the past who we consider creative, but who lived tortured existences: it all seems so romantic and fascinating, until you actually die a broke alcoholic who leaves behind a great novel! I wrote about the toxic mythology of the Rugged Individual in a GMP article: https://medium.com/equality-includes-you/its-not-cancellation-it-s-consequences-8e8cb1ee7989

FacebookTweetPinEmailShares121
wpDiscuz
1
0
Would love your thoughts, please comment.x
()
x
| Reply
Share this ArticleLike this article? Email it to a friend!
Email sent!