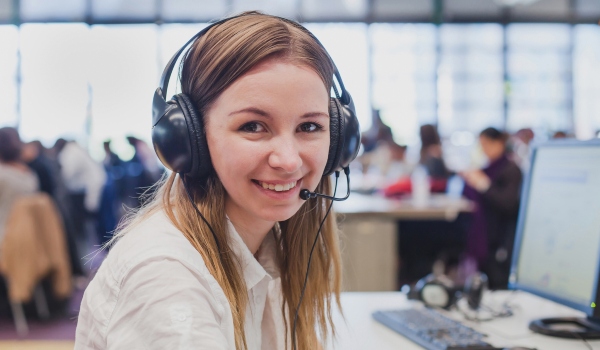 Over the last three days 3,400 ever-married U.S. residents took my Marital Name Change Survey. I distributed the survey link on this blog, Facebook and Twitter. I don’t know who took it, but based on the education and occupation data a very large share of the respondents were women (88%) with professional degrees (30%) or Phds (27%). It’s not a representative sample, but the results may still be interesting.

Here I’ll give a few topline numbers as of 8:00 this morning, and then link to a public version of the data and materials. These results reflect a little data checking and cleaning and of course are subject to change.

Respondents were asked about their most recent marriage. Half were married in the 2010s, but the sample includes more than 400 married in the 1990s and 200 earlier. 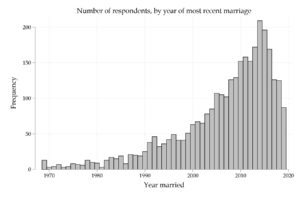 Because of the convenience nature of the sample, I don’t put much stock in the overall trend (I’ll try to develop a weighting scheme for this, but even then). However, I think the PhD sample is worth looking at. Here is the trend of women with PhDs (now or at the time of marriage) married to men. 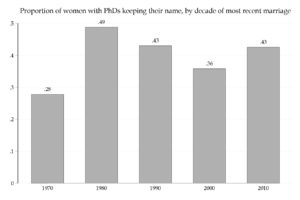 By this reckoning, the feminist-name heyday was in the 1980s, followed by a backslide, and now a rebound of women with PhDs keeping their names. The 2010s trend is like that found in the Google Consumer survey reported by Claire Cain Miller and Derek Willis in NYT Upshot.

Note, these no-change rates are higher than those reported by Gretchen Gooding and Rose Kreider from the 2004 American Community Survey, which showed 33% of married women with PhDs had different surnames than their husbands (regardless of when they got married). I show 53% in the 2000s had different names than their husbands, and 57% in the 2010s. Maybe that’s because I have more social science and humanities PhDs, or just a more woke sample.

These results also show a strong age-at-marriage pattern, with PhD women much more likely to keep their names if they married at older ages. Over age 40, 74% of women with PhDs kept their names, compared with 20% who married under age 25. (Note this is based on education at the time of the survey; I also collected education at the time of marriage, which I discuss below.) 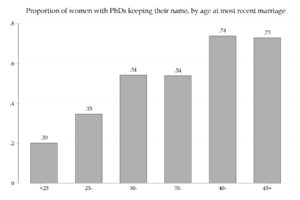 I asked people how important various factors were if people considered changing their names. Among PhD women marrying men who did not change their names, the most important reasons were feminism (52% “very important”), professional considerations (34%), convenience (33%), and maintaining independence within the marriage (24%). Among those who took their husbands’ names, the most important factors were the interests of their children (48%) and showing commitment to the marriage (25%).

I don’t have time now to analyze this more, but that shouldn’t stop you. Feel free to download the data and documentation here under a CC-BY license (the only requirement is attribution). This includes a Stata data file, and PDFs of the questionnaire and codebook. This will all be revised when I have time.

I am not including in the shared files (yet) the open-ended question responses, which include descriptions of “other” name change patterns, as well as a general notes field, which is full of fascinating comments; given the non-random nature of the survey, this may turn out to be its most valuable contribution.

Here are a few.

I changed my name to my spouses because I HATED my father and it was the easiest way to ditch his name. I kept my married name after divorce. I’m currently pregnant (on my own) and plan to change my name again and now I will take the surname of my step-father, who has been my “dad” since I was 5.

My wife and I had been together 10 years and through several iterations of domestic partnerships prior to marrying. Including before she completed her PhD. I didn’t want to change my name because my name flows really poetically and a change would ruin it (silly but true). She didn’t want to change her name in part because it’s what everyone in her profession know her as. I think we both also feel like our names represent our life histories and although we are a true partnership, that doesn’t negate our family histories or experiences. Which I guess is feminist of us. But we never explicitly discussed feminism as an issue.