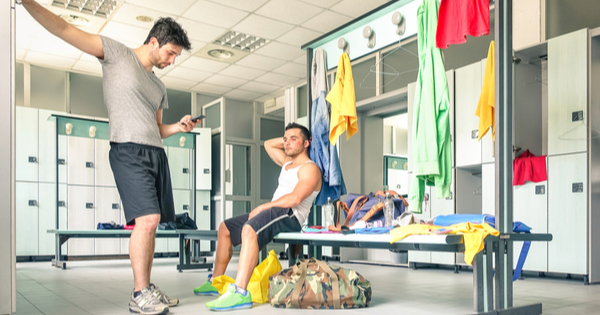 And, I understand if I were serious about “lifting” and “getting ripped” I would join one of those muscle factories with enough free weights to alter the rotation of the earth. I’m not that serious. I like to get a little exercise, and it makes my doctor so happy when I tell him I’m still going to the gym. He is so young and it makes me happy to make him happy. Plus, at the YMCA I fit in pretty well. Most people there are just trying to stay as healthy as possible and still have a few beers and a burger or two.[1]

Recently they put up a bold, white sign with handwritten text in green, red and yellow in front of the men’s locker room. It says something to the effect that the staff was going to start “patrolling the men’s locker room.” Too many people were just going in and hanging out. They were going to watch for “loitering.” It isn’t allowed. Another thing they are watching for is eating. It isn’t allowed in the locker room either.

I can’t really understand why people would hang out in the locker room. I wouldn’t. It seems a strange place to linger. For one thing, people are showering, and the pool is right on the other side of a door so the humidity is always pretty high. There are only low, wooden benches, and I have never sat on one but I can’t imagine they are at all comfortable.

Using your phone is forbidden. It is posted in several places. There was a woman who took a picture in a gymnasium locker room (a different, distant gym) a couple of years ago of another woman undressing and posted it online. She made fun of the way the woman looked. It was a shameful display of the worst of humanity and I don’t think anybody wants a repeat performance. Less than a hundred feet from the locker room are comfortable chairs, tables, and places to charge your phone.

It seems a little ironic our YMCA seems to have no rules about bringing in food, except for the previously mentioned mandate about the locker room. I have seen people with pizzas, donuts, or fast food sandwiches[2] enjoying them with a robust, noisy abandon. In fact, the management occasionally has a party and invites local businesses to advertise their offerings.

One time they had “Nothing Bundt Cakes” giving away little bundt cakes. I had one before starting and it was almost impossible to exercise thinking about the table filled with dozens of delicious, small cakes. But, it was out in the sanitized light of the main room. I probably would have given it a pass if they served them in the bathroom.

None of this is really important or even troubling to me. The part that really bothered me is the part of the sign that asked: “members to report violations to the staff.” I don’t understand hanging out in the locker room, and eating in there seems distasteful in the most extreme way. But, asking me to tattle on someone who sneaks a cinnamon roll in to share with his friends while they hang out in the locker room somehow pushes all the wrong buttons.

So, staff and management of the YMCA if you want to clean up the riffraff in the locker room you will have to do it without me. You can patrol the locker room. I salute the effort and support your good intentions. I understand “see something, say something” and I am all for averting a disaster, but snitches get a boatload of bad karma. I have managed to reach a balance yin and yang. It has taken sixty years and I’m not going to take any chances.

[1] I’m only guessing, I’ve never taken a poll. My wife would kill me if I started asking people about beer at the gym.

[2] I wasn’t close enough to tell if they were hamburgers, chicken or fish sandwiches, and my wife won’t let me drift over to see.