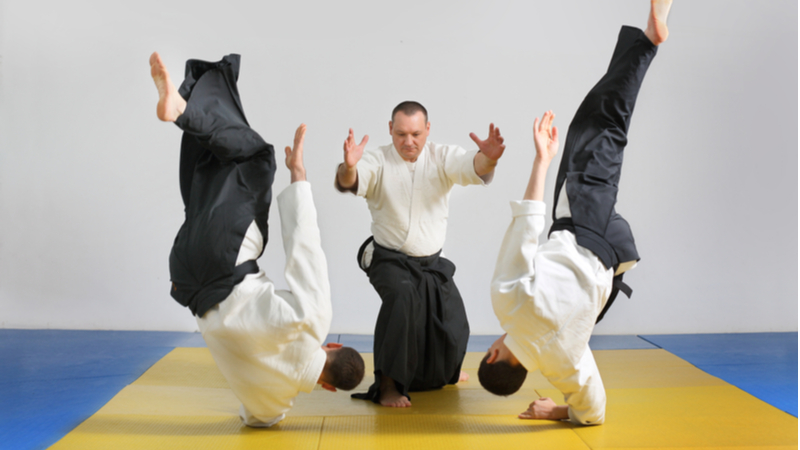 In Spring 1997, I completed the final stage of my Nidan test for 2nd-degree black belt with randori. In randori, multiple black belts attack by grabbing any part of the gi, Aikido uniform, that they can hold onto. For my Nidan test, five black belts attacked. WTF? I had expected four. One more attacker could be harder exponentially, not just incrementally. Then again, I never faced five before.

I had to throw, evade, or run away from five black belts until Sensei clapped his hands. That lasted for a couple of minutes or so. Still, those couple minutes felt like an eternity on the mat. I had already endured the previous 90 minutes throwing black belts executing individual Aikido technique, Tachi Waza.

In randori, I would inevitably get caught. I was already so fucking tired. That’s by design. Testing was about character, for Sensei, not about the perfect technique. He wanted to see how long I could hold on when I was far beyond spent. Sensei knew this. I knew that. Yeah, I eventually got caught by all five black belts.

Like Werner Erhard, I tell stories that work out. I passed my Nidan Test. Now, I’m Yondan, 4th-degree black belt. Mercifully, I didn’t have to test for Yondan. Sensei graciously recommended me for that. It was my last promotion from him before he passed away.

As randori began, we all sat in seize, butt on feet, on the mat. I sat facing my five black belt attackers. Sensei clapped. We all got up. It was on.

In casual observation, randori might have occurred like I was throwing several people at the same time. One might even ask, “Was Jon multi-tasking?” Hell, no. Yeah, five black belts attacked me simultaneously. Yet, I threw them one at a time. I completed my throw one at a time. And so on. I constantly moved on to what’s next, what needed to be done.

The mastery lesson of randori: Complete one thing at a time, regardless of circumstance. Have an empty mind. Just throw. Be present. This isn’t multi-tasking, at all.

No, I can’t attack both simultaneously. There’s only one of me. So I struck the person in front, moving him backward, creating space. Then I turned and struck the attacker behind. I completed one thing at a time. Then I moved on to what’s next. Be present in the moment of the attack and take appropriate action.

There’s no mastery in multi-tasking. Presumably, multi-tasking is the urban myth purported by those, who revel in their numerous uncompleted accomplishments. Consider this worst-case scenario: Dude texts on his iPhone while driving in his car. Aside from inviting almost certain automotive disaster, he can’t physically and mentally perform both tasks simultaneously without one task jeopardizing the other. In this particular case, not completing both tasks at the same time could be dire. More than just saying.

The purpose in Aikido is, simply, to end the attack. Mizukami Sensei always said, “It’s only one time.” I take out the attacker with one technique. One time. No sparring. This iterates to end multiple attackers one at a time. Dispatch the first attacker. Then take out the next attacker, and so on.

At work and in career multiple tasks occur simultaneously in terms of deadlines and projects. I know that all too well. Still, multiple uncompleted tasks seem far less optimal or desirable than completing most tasks. Just saying.

Mastery is in affinity and in accountability. If you know that you can’t complete everything, inform others or let them know that you need assistance. Obviously, this doesn’t apply to 5 black belts simultaneously attacking me. I can’t say, “Sensei, could you have 3 people attack? I’m really getting tired here.” That would not go over well at all. At least if I wanted to pass the test.

I had a conference call interview for a possible job with four program managers at work. They were all very gracious and cool. Yet, it almost occurred like randori in Aikido, as each program manager asked me his question in succession. Albeit without the sweat or grabbing. As I answered each question, I heard Sensei’s voice, “Throw one at a time.” So I answered each question as authentically as I could. After my answer, I listened to the next question. And so on. Instead of 3 minutes on the Aikdio mat, I spent 45 minutes on the call, answering one question at a time. I had fun. I got the job.

In mastery, be present; complete one thing at a time; do what needs to be done. In my Aikido Seminar, the French Aikido Sensei said, “You can’t do the impossible with technique.” Yet, you can do what’s possible within the defined limitations.

Complete one thing at a time, as best as you can. Then move on what’s next. Mastery is about making the world work. It’s about making ourselves work. Amen.

You seem to have a penchant for attributing to Werner Erhard every good idea that pops into your head. Werner said to do what works but had nothing to say about multitasking. Your statement that he tells “stories that work out” is completely meaningless in conveying the essence of Werner’s thought.

Facebook23Tweet2Pin1EmailShares26
wpDiscuz
Share this ArticleLike this article? Email it to a friend!
Email sent!