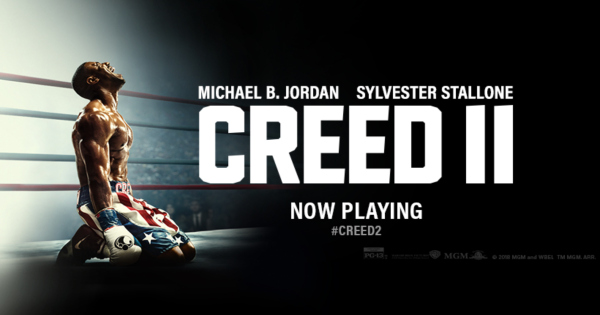 In 1985 my Dad took me to the movies to see “Rocky IV,” and the experience left a memorable stamp on my impressionable young mind. As Rocky Balboa and antagonist Ivan Drago exchange devastating blows, the crowd cheered and chanted “ROCKY! ROCKY!” like they were at a real fight. To me, it might as well have been. It is one of the earliest movie-going experiences I have and a great memory with my Dad, who to this day still loves Sylvester Stallone, and any new “Rocky” movie is met with great anticipation in our family.

That makes it all the more fitting that “Creed II” is, at its heart, a movie about family and more specifically, fathers and sons.

“Creed II” continues the story first started in 2015’s excellent “Rocky” spin-off, “Creed.” In this installment, under the tutelage of Rocky Balboa, light heavyweight contender Adonis Creed (Michael B. Jordan) faces off against Viktor Drago (Florian Munteanu), the son of Ivan Drago (Dolph Lundgren). You read that right, the superhuman Russian boxer from 33 years ago is back, this time training his son to enact revenge on Rocky by defeating his protégé. As any fan of the “Rocky” franchise will tell you though, the best films in this franchise have little to do with boxing.

Sure, the training montages are inspiring and the fights are great, but after 42 years and eight films, we are not here to see two boxers beat each other senseless. That is the dessert of these films. The meat and potatoes is the human relationships that Stallone has worked so hard to cultivate and honor all of these decades.

The original “Rocky” to this day continues to get mislabeled and dismissed as being a “boxing movie.” The 1976 Oscar-winning film (Best picture, Best Director Best Film Editing) is not a boxing movie. Yes, the titular character is a fighter who gets a one-in-a-million shot at the heavyweight title, but the movie is at its heart a love story. The famous line Rocky yells at the end of the film had nothing to do with the title fight he just had but was the famous “Adrian!” that to this day everyone yells whenever talking about the franchise.

This goes for the sequels as well. “Rocky II” (1979) was about Rocky getting married and starting a family, “Rocky V” (1990) was about losing everything and regaining that family, the wonderful “Rocky Balboa” (2006) is about loss, grief, and healing.

When “Creed” took audiences by storm three years ago it revitalized a franchise audiences (and Stallone himself) thought was finally put to bed. Rocky’s story was closed. He was finally able to run up those steps of the Philadelphia Museum of Art for the last time and off into the sunset. Bay Area filmmaker Ryan Coogler had other plans. He felt there was room for Rocky to continue, but envisioned a fresh take for new audiences. Mr. Coogler nailed it, as “Creed” was praised by critics, applauded by audiences and went on to be nominated for Academy Awards, most notably a Best Supporting nomination for Stallone.

“Creed” showed Rocky as an older man now. Grey-haired and lonely. He lives alone in his modest home in Philadelphia, runs his restaurant (named appropriately “Adrian’s”) and has lost all of his friends and family the previous few years. He is diagnosed with cancer and has accepted the fact that he can die and be with his beloved Adrian again. It is here that a stranger by the name of Adonis comes along, claiming to be the son of Rocky’s long dead friend Apollo Creed, looking to be trained. Their friendship anchors this wonderful movie. Adonis gains a father figure and Rocky, a reason to live. In an era of cookie-cutter remakes and unnecessary “soft reboots,” this movie was one of the few that “got it.”

“Creed” had a lot of work to do. It had to revitalize a dead franchise, introduce almost entirely new characters, got us to truly care about them, and sped us to the final fight. It’s only in a second film like this, now that we know all the primary characters, where we can settle in and really see where the story is going to take us.

The answer? “Creed II” forces us to deal with the sins of the father of two of the characters and in the process pumps up the sentimentality between the main cast.

Damn if the “Rocky” franchise isn’t at its best when it’s veering hard into sentimentality!

The movie is unapologetically about fathers and sons. Adonis is still coming to grips with his family history and the death of his father Apollo years ago, “Rocky IV” villain Ivan Drago returns with his son Viktor Drago (and his history with Rocky clearly influences his parenting style), Rocky Balboa’s estranged relationship with his son Robert, and the wonderful father/son relationship Adonis has with Rocky himself. Adonis may call Rocky “Unc,” but make no mistake, the fill-the-void relationship these two men share is more father and son than any in the film. It’s a wonderful chemistry Jordan and Stallone have. I could watch it for hours.

If there was any doubt that Michael B. Jordan is a leading man that is here to stay, this should put any doubters to rest. He has grown into this character well over the previous three years. Adonis Creed has matured into a confident World Champion and family man.

Sylvester Stallone builds on his Best Supporting Actor nomination from “Creed” by continuing to deliver the emotional core. Routinely dismissed for years as just a “dumb action star,” Stallone has always been a very good actor with the right material. It’s his scenes that pull at the heartstrings in this film. Rocky Balboa is one of the greatest characters in film history, it is a pleasure to be able to watch him as he moves into the twilight of his life.

“Creed” director Ryan Coogler, busy directing a little film series for Marvel called “Black Panther,“ hands over directing duties to Steven Caple, Jr. Most won’t know any of Caple’s work, but you will start to hear his name more after this movie. The film doesn’t move at such a brisk and exciting pace as the last installment, but is successful in continuing the story and reaching the emotional core of the script, written by Sascha Penn, Juel Taylor, and Stallone (one would be a fool not to have Rocky himself do a pass on the script). “Creed” is a better movie structurally and technically, but “Creed II” is more emotional and satisfying than its predecessor, particularly the ending.

The entire theater – young and old – knew these characters and were rooting for them like family members. Just as when I was 7 years old in that theater in Santa Clara, CA, the crowd began cheering on Adonis to chop down the villain Drago. The “Rocky” movies have always been about heart, and “Creed II” has it in spades. It’s a wonderful companion piece to the old sequel from 1985, but stands on its own as one of the stronger installments in the franchise.

Joshua B. Porter is a Writer/Director/Producer. The most recent film he produced, “August Falls”, is currently available on Amazon Prime as well as other streaming services and DVD. He will be taking his Dad to see CREED II this weekend and can be reached at @joshuabporter.

Facebook58Tweet5Pin3EmailShares66
wpDiscuz
Share this ArticleLike this article? Email it to a friend!
Email sent!