“I was almost killed by men with shotguns, on a raft, down a river.” Sounds like the start of a blues song to us. 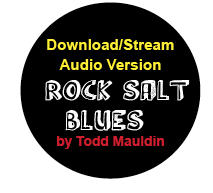 Ah, the age-old question: Do age and experience really overcome youth and vigor? I never believed that it did, when I was young and vigorous. But the older I got, the more it seems to make sense. Or maybe I’m just whistling past the graveyard. Because, of course, to really evaluate it, you’ve got to survive your youth and vigor to acquire any age and experience.

All I know is, this is a true story: one time when I was a teenager, I went duck hunting with some friends of mine. The ducks were on private property, on a ranch where they wouldn’t let us hunt. So we decided to get on a raft and float onto their property to hunt, commando-style. We loaded up these two old trucks, left one downriver below the ranch and drove the other upriver above it and got on our inflatable raft with our shotguns and beer and started floating down. It was all going fine until we came to where the ranchers had strung barbed wire across the river, I guess to prevent people from trying what we were trying, I guess. Fortunately, we had wire cutters. We cut their fence and kept on floating. We didn’t have a care in the world until those buckaroos came riding out of the willows on the bank, shooting at us.

Now friends, those of you that didn’t grow up around ranches, particularly around ranches in northern Nevada, you may not know that it’s fairly common practice for buckaroos and ranch hands to carry shotguns loaded with rock salt shells. They use them to get the attention of cattle that aren’t doing what they’re supposed to be doing, or aren’t where they’re supposed to be. The rock salt doesn’t penetrate cowhide, but it stings enough that even those stupid beasts have to pay attention.

So these cowboys come riding out of the bushes, blasting away at us with rock salt. They were far enough away that it didn’t penetrate our hides (speaking stupid beasts) but it was hitting plenty hard enough to get our attention. In fact the attack was so noisy and painful and sudden that none of us remembered we ourselves were armed, with something a lot more dangerous than rock salt, and we never returned fire. We just yelled and screamed and begged them to stop and paddled like hell, and they just kept shooting at us, reloading, and laughing.

We finally got away from them, around a bend, and cut another fence across the river to make our escape. Remember what I said about rock salt not penetrating cow hide or even teenager hide? Well, turns out it DOES penetrate inflatable raft hide. So, we sunk about 500 yards from our getaway truck. We made it out alive though, soaking wet, covered in welts, and wiser for the experience.

That’s what it gets down to, doesn’t it? We built some character that day, if you want to call it that, and we had the youth and vigor to come up with that brilliant idea and execute it, but not the wisdom and experience to anticipate the outcome.

I think of this story every time I hear about somebody who’s got all the answers, or some new hotshot artist or politician or preacher or pundit. I think about how I was one of those guys once. Now, I’m not, I’m just a guy not standing in anybody’s way. Like my buddy says: You can do anything you want, once. I say, “Yep… but just watch out for the rock salt.”

Todd Mauldin (@mrtavo) is a musician, writer and artist living in Reno, NV. He blogs at www.toddmauldin.com.

You Sir…. are edging close to parable territory!
“A parable….What is it? Well it’s a little story with a lot of truth.”

in my mind and I’m sur in the minds of your fellow good men, that’s a great thing.

Thanks Andrew. You know, I think you’re right. But I still have the shotgun I was carrying in the raft that day, and it has never worked right since we sunk that day some 20+ years ago. It’s there as a reminder, in case I ever DO forget.

Great work, Todd. Nice and concise and hard hitting as the best songs (of any genre). I’ve had a lot of those experiences, too, where you step out of your comfort zone and deal with what comes. Those are moments you never forget.

Thanks for the reminder.

Dude you are the greatest bluesmen I know. Which isn’t saying all that much because you are the only bluesman I know. But you are also one of the best men I know. And I know a lot of guys.

For a blues player, you are a pretty good writer. Keep up the good work.

Facebook186TweetPin1EmailShares187
wpDiscuz
Share this ArticleLike this article? Email it to a friend!
Email sent!