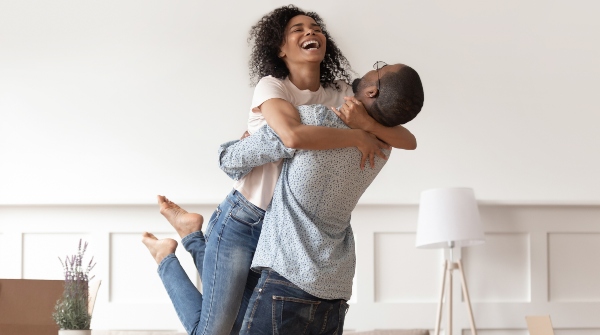 The Fab Hub and I have no business telling anybody else how to have a happy or successful marriage. We are by far not the poster children for blissfully happy marriage.

That sounds awful, doesn’t it?

It’s not that we’re pessimistic or that we have a lousy relationship. Perhaps it’s just that we’re a lot more pragmatic than most people. That’s just our style. Lately, we’ve found ourselves paying a lot of attention to the details of our relationship for a number of different reasons and it’s reminded us of a few important things that we think are pretty helpful in creating a strong and successful marriage.

1. For starters, figure out that your marriage is not perfect.

And that it’s never going to be. There is no such thing as a perfect marriage. Human beings are, by their very nature, imperfect. So how likely is it that two imperfect creatures will decide to create a life together and somehow manage to pull off perfection? It’s not. If marriage were a state of permanent bliss and perfection, neither person would ever grow. The relationship would not grow stronger. In his autobiography, Benjamin Franklin outlines his plan for achieving moral perfection. How presumptuous! Not to ruin a good personal improvement plan story for Old Ben, but in the end he realizes that he has not – and likely never will – achieve moral perfection.

But despite his apparent failure, Franklin does end up better for his efforts. While he may not have achieved moral perfection, he did manage to improve several areas of his life in the process. Any progress to that end can’t be a bad thing. Perhaps we can approach marriage in the same way. Stop trying to define perfection and simply work together toward growth.

2. Understand that the version of romance the media feeds you is not the real stuff.

Flowers die. Chocolates either melt or make you gain weight. Romantic candlelit dinners have their place, but it generally won’t be in your dining room. Don’t hold out for the jewelry or the romantic getaway weekend or the monster bouquets of roses on Valentine’s Day. Of course, these things are nice. And if they really are the things that make you happy, then by all means indulge.

But keep in mind that by definition, the concept of romance is misleading. Something that is romantic is characterized by an idealized version of reality. When we speak of something as a romanticized version of life, it is generally with a negative connotation. So why would we want to define happiness in marriage by romance? If you find yourself wondering where the romance is in your marriage, open your eyes and look past those things.

Instead, be able to recognize the romance of having your coffee made just the way you like it every morning or having a home-cooked meal prepared with love every night. Recognize that true romantic gestures include things like handling the chores the other person hates, putting away the folded laundry, or bringing a heat pack to relieve sore muscles. We are programmed to think those larger-than-life gestures are the real deal, but it’s the little realities that make for true evidence that we are loved.

3. Be OK with the fact that every so often you will find yourself wondering why you married this person in the first place.

Think about the sibling you shared a room with growing up. Or your college roommate. Did that person ever drive you to the edge of frustration? Or beyond? Living in the same physical space as another human being is difficult. Period. The Fab Hub hates when he hears “Hon…? Hon…?” coming from me mostly because it is generally fifteen seconds after he has just settled himself in to work on something. It drives me batty that it takes him fifteen minutes to situate himself in bed at night because he insists on wrapping himself up like a burrito before he goes to sleep.

Married people don’t find it any easier than siblings or roommates. Somebody will leave toothpaste on the counter or forget to empty the trash. Your sleep schedules and movie preferences will rarely align neatly. If you find that you drive one another insane fairly often, you’re probably more normal than you think. If one day you find yourself looking at your spouse and wonder how it took you fifteen years to figure out that they make weird noises in their sleep, resist the urge to throw up your hands in despair and wonder how you could possibly have missed all these important character traits. Instead, see it as an opportunity to continue to learn more about one another and grow together. Who knows? Maybe you’ll discover a hidden character trait that doesn’t make you want to run screaming from the room.

4. Always remember that in order for any part of your marriage to work, you have to communicate.

Communication is important for any relationship, married or not. A lack of communication leads to misunderstanding, false assumptions, hurt feelings, and more. Of all the things in our marriage that could use some fine-tuning, the Fab Hub and I would agree that this is our toughest challenge. As he pointed out to me this evening, communication should be about sitting together, face to face, actually having a dialogue with one another. Calmly. Communication is generally not defined by yelling, screaming, and histrionics.

If we think back over the time we’ve known each other, our biggest arguments and challenges as a couple have been due to a lack of communication on the part of one or both of us. We speak different languages – male vs. female, conceptual vs. verbal, patient vs. excitable. The list goes on. We think and speak in very different ways and it sometimes proves to be a challenge. When stress enters the picture, it becomes exponentially more difficult. Sometimes the communication is seemingly trivial – who is doing the grocery run and who is picking up the dry cleaning.

Sometimes it’s much more serious – like what to do about tight finances or how to handle Kidzilla’s discipline. No matter the topic, communication should never be taken lightly. And if you find that you just aren’t communicating clearly? Don’t be afraid to stop and say so. It can save a whole lot of frustration and upset if you just stop and figure out how to get to a place where both parties understand what is being said. You may find it helpful to maintain a sense of humor.

More than once we’ve found ourselves at a communication standpoint only to realize just how ridiculous the entire situation was and ended up bursting into laughter. It doesn’t erase the problem at hand, but it sure does help to diffuse a tense moment.

5. Know that at some point, some part of your relationship may feel like it’s broken. Maybe your efforts at positive communication will break down. Maybe stress or illness will get the best of one or both of you. Maybe your physical relationship won’t be working the way you’d like for one reason or another. Maybe you will find yourselves fighting over every little thing and a few big ones. A marriage is a living, breathing thing. As both partners go through the various changes of their lives and outside circumstances fluctuate around you, some part of your marriage may end up feeling broken. It’s not the end of the world and it does not necessarily signal the end of the marriage, either.

As John Smith said in his General History of Virginia, everything of worth is found full of difficulties. Countless other writers, thinkers, poets, and singers have expressed similar ideas. The concept is clearly universal. If your car breaks down, you fix it. If your kitchen sink is clogged, you fix it. If some part of your marriage isn’t working right, figure out what it needs and go about the business of fixing it. Maybe you need to sit and talk something over. Maybe you need to get out of the house and spend some time alone together. Maybe you need to step away from an issue for a while or get an objective third party to help in some way. Whatever it is, don’t wait to do something. “Maybe it will go away” or “maybe it will get better on its own” are potentially dangerous words.

There are probably as many secrets for a successful marriage out there as there are marriages. These are what work for us plus one more overarching factor – we genuinely like one another and are truly the best of friends. That’s how the whole thing started. So far? We’re doing OK. We figure we’re pretty normal. We have our ups and downs and some days are better than others. But at the end of any day, what never changes is that we are both here. Where we want to be. Figuring it out together.

Facebook13Tweet1PinEmailShares14
wpDiscuz
0
0
Would love your thoughts, please comment.x
()
x
| Reply
Share this ArticleLike this article? Email it to a friend!
Email sent!