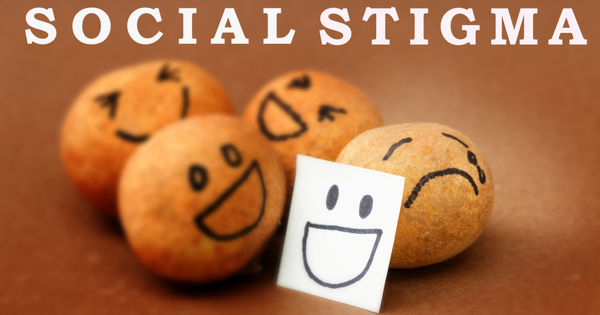 Dealing with mental health stigma is a day to day struggle which follows me wherever I go. There’s so much stigma within our society, that it’s engrained in the culture, the language, the way people have conceptualized those with mental health struggles, and it’s commonly accepted. It’s so commonly accepted that on a daily basis I can hear jokes that are disparaging towards mental illness, and not a single person cringes or speaks out against it.

Not a single person even remotely has an ear for what is or isn’t acceptable to joke or laugh about with mental health jokes. Not a single person has a pang of remorse for disparaging anyone who has had mental illness. There are a number of people in my life who know about my mental health and me having had a diagnosis of schizophrenia, yet they still make stigmatic comments and they also fit these social criteria of not knowing where to draw the line. There are also a number of people who don’t know about my illness who also make these comments.

One of the most difficult parts about combatting mental health stigma is navigating conversations with people whom I’m close with and I have known my entire life and not even having space to talk about stigma. I remember after my first episode of schizoaffective disorder, which lasted over two years, I told people about my diagnosis and I was given responses that “You don’t have that” or “that’s not true” despite having thought I was a messiah, nearly starved to death through obsessive thinking, experiencing multitudes of disorientation, referential thinking, mania, sleeplessness, near homelessness, and a number of other symptoms. The response was that “You don’t have mental illness”.

People simply didn’t want to deal with having these conversations. The implicit message I usually find within any conversation surrounding stigma is that people don’t want to hear about it and they don’t want to talk about it. I’ve found a number of people would rather have everyone else change as opposed to them changing the way they view the world. It was easier for them to find fault in me than to find fault in themselves and to invoke change in themselves.

For years having a mental illness was a matter of staying in the closet because as soon as I divulged my diagnosis it was incredibly awkward. People would speak to me differently after having had a fluid conversation with me for minutes or even having spent hours together at parties. Some people didn’t even know how to talk to me. There was a multitude and still are a multitude of implicit biases that were directed my way. At first, I tried to justify this awkwardness in my mind. I thought, “Maybe it is awkward to mention I have schizophrenia? Maybe this isn’t something that should be public knowledge? Maybe this is a damper on the party or the conversation or maybe this is too big of a problem for others to hear about?”

I used to think maybe I am at fault for making this conversation awkward and I shouldn’t have mentioned my mental illness at all. In retrospect, I don’t think I’m the one at fault for this. If people can talk openly about cancer and about any physical ailment, why can’t we talk openly about mental illness? I understand there are details of my experience that I’m not going to mention at a party or with others around me but culturally, it’s still socially unacceptable to have a mental illness never mind mentioning to anyone that you have it. There’s no space within the social constructs of our everyday conversations to have conversations about psychosis and psychotic disorders.

If someone at a party can mention they’ve broken a leg, why can’t I mention I see things that aren’t really there and only exist temporarily within my mind’s eye and not within the organic world? There’s no curiosity towards hearing about these experiences, rather there’s fear and judgment that I encounter any time I mention these kinds of things. Immediately if I mention something of this nature there’s a judgment that comes along with it and it’s usually a character judgment. People think I must be a bad, irrational, or crazy person because I’m seeing or hearing things.

The assumption is that you’re different, you’re an outsider, you’re not a part of the group and there’s fear that’s directed towards you. When I assess myself as a person it doesn’t make any sense why someone would suddenly become afraid of me for telling them I have had schizophrenia. I’m a good person and I take good care of people even when they don’t do so for me. However, most people don’t understand that hearing voices and seeing things doesn’t have any correlation to how rational or logical a thinker you are and it doesn’t provide a framework for the content of your character and personality. This same statement applies to most mental health symptoms.

People make a number of strange assumptions about you as a person when you divulge your diagnosis and they always seem to want to categorize me within a group of “people who have mental illness’ whereas we’re not really this one primary group. We’re all individuals who have a common trait of mental illness, but we’re just as individualized as any other group within the world which is something I want people to be able to see.

Sometimes people like to categorize groups of ‘us and them’ and fit everyone into neat little boxes because they think it’s providing them information about you or they have a sense of who you are and they have knowledge about you when they really don’t. It brings to mind an issue with labels. People hear the label of mental illness or a diagnosis and they immediately assume they know something about you. Words are labels for concepts and throughout history they have been sufficiently noted as being insufficient to describe life at its fullest. The label of mental illness does not describe who anyone is or give you a context for how to talk with them or interact with them.

What consists of a group? People being categorized by one common trait doesn’t mean that we are the same or different in any respect. People assume since they have one notion of mental illness which may be derived from someone they know, from popular culture, from things they’ve read, that they have insight into everyone with that same label which is not true at all. So many people assume they know who I am or know things about me due to knowing the labels or diagnostic terms that encompass a nebulous description of a small portion of my life experiences when this gives zero insight into my personality and or anyone’s personality who have been given these labels.

FacebookTweetPinEmailShares47
wpDiscuz
0
0
Would love your thoughts, please comment.x
()
x
| Reply
Share this ArticleLike this article? Email it to a friend!
Email sent!