Get Daily Email
Join/Login CLOSE
Home / Featured Content / The Hedonic Treadmill: A Look at Our Relationship With ‘Happiness’ and ‘Stuff’ 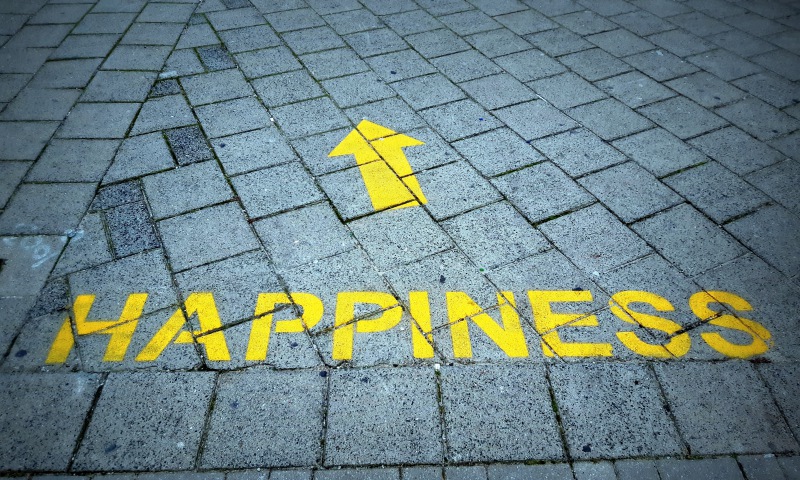 A topic I’ve debated internally for as long as I can remember is the true nature of happiness. Particularly — what contributes to a person’s overall net happiness? Is it having a lot of nice things? Going on cool trips? Some mix of having stuff and experiences? In this article I’d like to break down my take on the hedonic treadmill as it pertains to overall happiness. Here goes…

When I graduated with my bachelor’s degree in 2005, I was driving an early 90’s model Chevy Lumina. It had a single spinner on the rear passenger wheel, because I was ballin’. I had purchased this car for $900 from a college friend. It was an old car, but it ran perfectly and never failed to get me to and from work and school (which honestly was about all I needed it to do).

Once I graduated and got my first big kid job, what did I do with my awesome Chevy Lumina? Traded it in for a bigger better truck of course! Let me explain.

Upon graduation I was quickly promoted to management by the casual dining restaurant chain I served tables for through school. When I saw that job offer, my jaw dropped… $40k, 2 weeks paid vacation, and benefits. This was it, I was big time now, a 22-year-old hotshot ready to take on the world. And what does every 22-year entry level manager need? You guessed it, a $35,000 truck. I rushed to the nearest Nissan dealership, traded in my paid off Lumina for a brand-new Nissan Frontier (or as I affectionally now call it, a boat load of vehicle debt summing up to half of my monthly income).

The buying didn’t stop there. Within 4 months of graduating, I also traded in my $400 per month rental room from my sister for a $1400 per month interest only mortgage on a new condo, another must have for the penniless new professional. If you have a brand-new condo, you have to fill it with stuff, so next I hit the Lay-Z-Boy store and Best Buy like they were going out of style.

Do you see the trend I’m describing? If not, here it is… the acquisition of ‘stuff’ ruled my initial post-collegiate years. Within one year of graduating college, I had somehow accrued nearly $250,000 in debt for stuff (including my truck, condo, and a variety of other stuff I bought that I had lived without for years before). This continued for me for a couple more years. Then one day, I decided to sell every last thing I owned and move to Europe (Azores, Portugal to be specific). Interestingly, I lived in the Azores for one year devoid of ‘stuff’ and have some of the best memories of my life. But within a few years of returning home, I once again have acquired an unruly amount of stuff.

Why on Earth would one be so driven by the acquisition of more stuff? Does it make life better or result in an increase in net happiness?

The answer lies in the hedonic treadmill (otherwise known as hedonic adaptation). Simply explained, this expression describes the natural tendency of a human being to return to a baseline level of happiness after a very positive (or negative) change. For instance, I would go buy a new gadget and it gave an initial rush of happiness, but after a period of time, that rush wore off leaving me with little net change in my overall happiness. Seeking further temporary boosts in happiness, I would go buy something else and so the hedonic treadmill perpetuated.

There is absolutely nothing wrong with wanting to live a comfortable life, and to do so there are basic human needs that must be met. But I would argue that many of our relationships with acquiring stuff have far superseded the basic needs for survival and therefore do not result in a net gain in happiness. If you have unlimited resources and buying power, then perhaps this is no problem for you. But I don’t fall into that category of buying power and therefore feel compelled to dive deeper into my own hedonic tendencies and how to transition them into more sustainable mechanisms to increase my net happiness over time. Let’s dive into a few of my learned lessons on hedonic adaptation.

Money doesn’t buy happiness, but not stressing about how to pay the mortgage helps

I’ve seen both sides of the economic spectrum. I’ve been a struggling entry level manager trying to feed a family of 3 on peanuts and I’ve been a successful entrepreneur with no concern about paying my bills. And presently, I sit somewhere in the middle. Both ends of the economic spectrum come with tradeoffs. However, one thing I’ve learned to be true is that there is a baseline standard of living needed in order to maintain an equilibrium in net happiness. It’s pretty hard to be happy when you don’t know for sure if you’re going to pay the mortgage next month. These self-help gurus that spew catch phrases like ‘money doesn’t buy happiness’ clearly have never gotten to Friday night and not had $20 to buy a pizza for their wife and kid. While I can admit that the 5-star dinner really is just for show and doesn’t contribute to a net gain in happiness, being able to afford to treat my family once in a while and know the bills will still be paid is a must for me to maintain a baseline.

The latest and greatest gadget is a waste of money

Part of the hedonic treadmill is the rhetoric that we need the newest, latest and greatest stuff. For instance, I used to be that guy who bought the new iPhone every single year. Truth be told, this did not contribute to a net gain in overall happiness. Rather the new tech, gadget, or thing quickly just became a normalized part of my life. The way that new phones or gadgets are marketed makes it sound like your life will improve 10-fold by sheer virtue of owning them. But the reality is at the end of the day you’re still holding a newer version of a device that connects you to your loved ones and the rest of the world. The micro-second of speed or few extra pixels in the camera really don’t contribute to net happiness in the long run.

Experiences over stuff every day of the week

My family and I started prioritizing our income towards experiences such as travel a long time ago. We have made it a point to live a lifestyle in our hometown such that more is invested into experiences than stuff. While the new phone or fancy car quickly normalizes into part of your daily routine, an experience shapes you. Experiences such as travel have connected me with people and cultures that have opened my eyes to new ways to approach life once I get back home. Those experiences compound in such a way that have evolved my character and interactions with the world around me. I’m yet to have found a tangible thing I can buy in a store that I can say the same about. Sure, I enjoy having tools to perform my job better (like the laptop I’m writing this article on), but ultimately, I look back on the experiences that shape me with vivid clarity. I can’t say the same about the iPhone whatever model I bought 4 years ago.

When we seek meaningful experiences, knowledge and an enhanced ability to apply wise reasoning to your day-to-day life follow closely behind. This accrued knowledge and ability to reason can directly translate into more skillful decision making when faced with life’s challenges. I don’t know about you, but I’ve made some downright stupid decisions in my life (I’ll save that for a more lighthearted article, but let’s just say ‘hold my beer’ was my tagline for most of my young adult life). While some of these stupid decisions resulted in the knowledge of outcomes, I know I’d rather not repeat, I can say empirically that as I’ve grown my ability to make well-reasoned decisions, my net happiness in my life has grown alongside. Acquiring more stuff does not have the same effect. I can’t think of a scenario where getting the latest gadget or newest car has translated into me making wiser decisions in the future.

Circling back to the year I was in the Azores, there was a moment leading up to my departure that has stuck with me. I had a storage unit filled with things from my condo… sofas, beds, desks, end tables, decorations, etc. Initially I knew I needed to offload much of these items in order to move away, but at the onset I was very attached to my things and reluctant to let them go. Then I got rid of one thing and felt the lightness that it brought me. By the end of this purge of stuff, I was left with a single duffle bag full of clothes and a backpack full of personal effects to my name. It was quite honestly the freest I had ever felt. I left for Portugal with my few worldly possessions and assured myself that never again would I be one to acquire so much stuff.

Fast forward 10 years and I haven’t quite lived up to that promise to myself. I look around my study and can see 10 things I probably don’t need sitting on the shelves. But that is ok because applying the lessons I outlined above, I know that I am working each day to structure a life that is geared towards maximizing my net happiness over time. Once you have the basics… seek knowledge, experience, and teach yourself to be satisfied instead of constantly seeking the next payout. As far as my experiences go, this is what leads to a truly happy and fulfilling life.

Passionate Health and Nutrition Coach who believes everyone can lead a healthy life and reach their goals through intentionally building new habits.