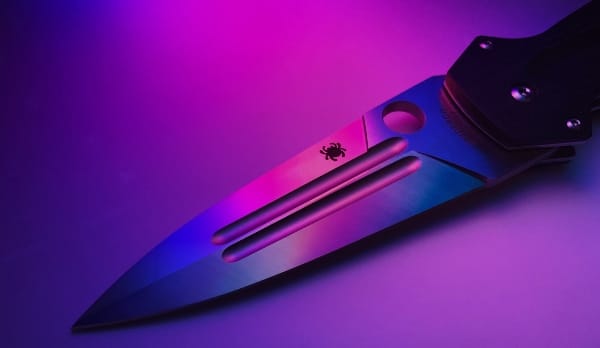 Twenty years of studying Aikido finally came in handy. Luckily, some of that study trained me to defend against a knife. Knife attacks up close are, in many ways, scarier than guns. They can also be more dangerous and as fatal. Ask any police officer.

I was standing outside the Recreation Center where my screenwriting group meets. Some of us hang out and talk shop or shit after the meeting. Sometimes we are a little loud. At least, my laughter is. Four of the men were in a semi-circle in front of me. My back was to the steps to the Center, as if I was holding court, which I probably was. I’m an extrovert like that.

None of us noticed the apparently homeless man approach behind me. We became aware of him when he asked a question in a guttural growl. None of the men responded, and I didn’t understand what he said, although I could tell it was a question. I turned to him and asked kindly, “What do you need sweetheart?”

He spoke again, “Are you gonna keep fucking with my life?” Not exactly the question I expected.

It took me a moment to reply, as I looked down to his hands and noticed a six inch knife gleaming in the moonlight. He held it at his side but across his waist.

Time really does seem to stop in these situations. It felt like I spent five minutes looking at the knife. It was more likely five seconds. His glowering visage burned itself into my memory, as did the gleaming knife. I carefully backed down off the curb, into the midst of my four writer colleagues, but staying in front of them. It was instinctive as a martial artist. There was no conscious thought involved in not hiding behind them. I knew what to do in a knife attack. At least one of them probably did, too, but there was no time for me to ask.

As I backed down one step, I kept eye contact in what I hoped was a non-threatening way. As I gazed into his eyes, with a soft focus keeping the knife in my line of sight, I said, in as caring a voice as I could manage, “No, baby, we don’t want to keep fucking with your life.”

I could see his mind process my response. His glower didn’t change. But he turned and walked away, climbed back up the stairs, and laid down on his bench.

We had been disturbing his attempt to sleep, outside a place which welcomes homeless people. They can shower there, and unobtrusively sleep on the porch.

We had passed by them before, while leaving our writer’s group. I had never felt fear before while leaving there, and I didn’t feel it now. Until I got into my car to drive home. Maybe It wasn’t so much fear I felt as the release of the adrenaline the body naturally produces after a highly stressful event. I called my son, who studied Aikido with me for six years. He thinks of me as a badass, and I don’t enjoy disabusing him of that idea. But I felt a need to let someone close to me know what had happened. He was supportive, showed no surprise that I had handled it, and I let him go to finish watching basketball.

I called one of my guy friends and asked him to talk to me until I got home. I needed the reminder of normalcy. Although applying the word normalcy to this friend is a bit of a stretch. He is a gay artist who loves a form of rock I don’t even know how to describe. Emo/Metal? Punk/Grunge? Whichever, his irreverent approach to life plus enough clean, clear empathy to get me home unscathed made him the right choice.

Aikido teaches how to use the attackers force against them. But it goes much deeper than that. Sometimes you need to reach under the surface attack to see the sad, scared human underneath. Sure, there are psychopaths you can’t reach with either reason or compassion. But a homeless man with a probable mental illness, who carries a knife so people won’t fuck with his life? Him you can reach with a sincere, caring response in a calm, nurturing voice. We all need that at times.