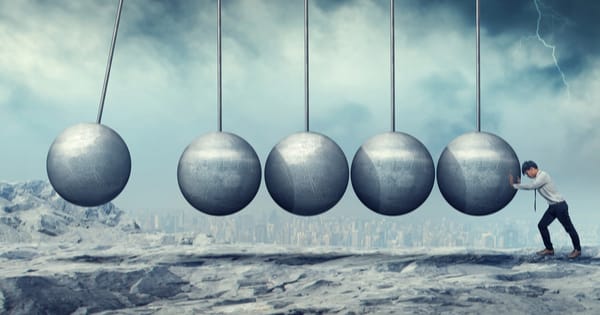 What you resist persists.

The first time I heard that I was in my 20’s and I am not sure I processed it as the profound truth that it is…I thought it was more like bumper sticker “wisdom” with a catchy rhyme.  It conjured for me that Gary Larson Far Side cartoon, “Midvale School for the Gifted” which shows a student pushing up hard against a door that is clearly marked PULL.

Now that I am (a lot) older and (somewhat) wiser, I realize that’s not a half bad out-picturing of it, in fact.  How often do we find ourselves pushing when we should be pulling, running when we should be standing our ground; banging our proverbial head against the proverbial wall and wondering why in the hell we aren’t solving the “problem”, especially when we are TRYING SO DAMNED HARD.

Frequently we are actually pushing against our own best interests because we don’t know how NOT to effort, how NOT to struggle, how NOT to strain.  Effort and struggle and strain become our go-to strategy, and even when they prove to be something less than efficacious, we are comforted by the fact that hey, at least we broke a sweat.  So maybe breaking a sweat was the whole point.  Maybe resistance was our goal, after all?

What you resist persists.  Way back when I first heard that, I was a single girl on the “dating scene”…I shudder to recall.  One particularly memorable set-up was with a guy I’ll call “The Duck”.  Because that is how I referred to him behind his back, for reasons I will leave to your imagination.  As you can probably guess, it was not a love match and the names of the individuals who introduced us have been withheld to protect the not-so-innocent.

No, it was not a match for me, but The Duck apparently felt somewhat more optimistic because he would NOT leave-me-the-hell-alone.  Phone calls (I never picked up), long messages (deleted), invitations (ignored)…he even resorted to showing up at my apartment unannounced (I hid in the bathroom until he stopped knocking.  Which took a long time.  I think he knew I was in there)…The Duck was a man with a mission!

In retrospect, we were both ahead of our time; he was an elbow-grease stalker before the internet made it easy-aces and I was “ghosting” before technology made it so much more obvious that is what was happening.  In spite of everything, I never thought he was a bad guy.  Just weird and boring, which is actually a tricky combo to pull off.  And annoying.  And not someone I wanted to spend time with; but now I realize I should have faced him and had a respectful conversation.  I guess I didn’t have the confidence in my personality as a libido killer that I do now, ha.  I was putting all of my energy into a childish resistance tactic; so, he persisted.

What you resist persists.   The irony is, whenever we feel a stubborn resistance to anything or anyone it is almost for certain that there is a gift to be had in accepting instead.  Acceptance gives us a strange superpower that works like emotional immunity…it is an open-heartedness, an understanding that the present is all we have for sure, a detachment from result-oriented behaviors.

The first step towards learning acceptance is inevitably inward; what are you resisting in yourself?  It could be as big as a dream you believe is too unrealistic to achieve or as simple as hating your curly hair.  Whatever you are “pushing” against in yourself is wasting your energy and distracting you from living peacefully as a whole.  Accepting all that you are—the good, the bad and the ugly—means allowing every single bit of it to be okay.

A friend of mine recently had a (Freudian) slip of the tongue when describing me…instead of calling me “fierce”, she said I am “ferocious”.  And after we finished laughing I said, “I’ll accept that”.  Every aspect of who we are exists for a good reason; and yes, my life has called on me to be ferocious more than once. Acceptance is the medium of miracles; once we are able to work that magic on ourselves, it is so much easier to extend it graciously to others.  Once we can forgive our “mistakes” and “flaws” and even our resistance, we are able to allow others their own without judgment.

What you resist persists.  As an experiment pick one thing you get stuck on, one belief that hangs you up; start small, like maybe you believe one clerk at the store is slow, or mean, or judging your purchases or all of the above.  Start deliberately going through that line EVERY TIME.  Stop avoiding the situation and accept that the clerk may simply be struggling in work and/or life.  Yes, it is even possible he/she targets you personally, but more likely is just an angry or lost person in general.  I challenge you to face down the lion; accept this person’s behavior with no fear.  You may not EVER grow fond of them (but that is what happened for me), but you will stop being ruffled by them.

Thich Nhat Hanh has written, “You don’t need to be accepted by others.  You only need to accept yourself”.  You cannot be impugned by the judgment of another; it is harmless to you when you realize it is A) not your fault and also B) not your duty to do anything at all to change it. When you are able to accept who you are, you also begin to accept how others are.  Who (or what) is the lion (or duck) in your life?

What you resist persists.

Realize that anything you are pushing hard against is pushing back on you.  Pull open the door and invite it in; just don’t be surprised if it says “never mind” and goes away on its own.

Every word of this I can relate to. I particularly appreciate your realization that a respectful conversation was the better way to go. More than once I’ve become aware of what I’m resisting and used it as an opportunity for self-knowledge—but it took me a very long time to figure that out.

END_OF_DOCUMENT_TOKEN_TO_BE_REPLACED

Facebook58TweetPinEmailShares58
wpDiscuz
Share this ArticleLike this article? Email it to a friend!
Email sent!