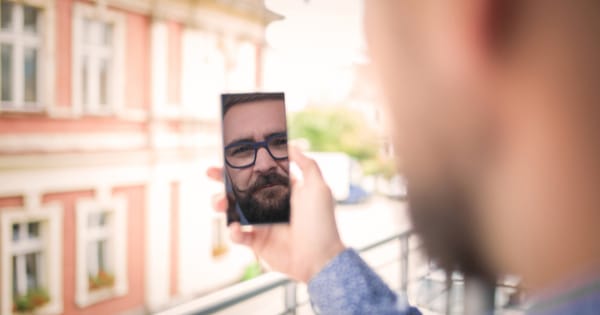 Everyone has a story about their body. Some of us want to look great for the beach, to feel powerful and sexy when we’re in bed with someone, or to move easily without pain or discomfort.

My body’s story has everything to do with being gay.

As a kid, I was always sick and had more allergies than you could count. I had allergies to foods, dust, pollens, and fragrances. I reacted in many ways, from a skin rash to hives, earaches that were beyond painful, diarrhea, flu-like symptoms, and days spent sick in bed. To make matters worse, I was diagnosed as ADHD. Imagine pairing an allergic reaction and ADHD together! Suffice to say I never felt like I had much control over my body as a child.

Being sick a lot made me aware of how my body responded to food and foods that did not agree with me. Perhaps because of my mother’s intervention and being so reactive to food as a child, I never got fat. I was always skinny. When you’re sick all the time it’s difficult to gain weight.

Just imagine a sickly and highly reactive hyperactive child. How do you think my schoolyard peers and teachers responded? I was a handful, not because I was a bad kid, rather I simply had little control.

One of the first times I was acutely aware of my body in public was in grade seven when we were introduced to taking a shower after gym class. I was f*cking terrified. I was terrified of what I might see, afraid that the boys might notice me looking at them, and ashamed — for no clear reason at that time — of my body.

After showering, one of the boys was confident enough to say he was afraid of getting naked because he was the only one who had not yet reached puberty. If only I could have openly said that I was also nervous, but because I was curious to see what other boys look like naked.

Gym class remained one of my least favourite periods at school, mostly because I wasn’t very athletic. I felt awkward and I didn’t feel like one of the boys. Somehow the other kids understood this and my physical weakness was continually reinforced as one of the last kids picked for any team in gym class.

There was a special moment in high school grade nine. We were bussed to another school to learn about gymnastics. I loved it. I was a natural and I was one of the best on the pommel horse. I never continued with gymnastics because I was afraid of being labeled gay.

This was the early 80s in Mississauga (a suburb outside of Toronto, Canada) and everyone at my high school who was a boy called everyone who was in gymnastics a faggot. I thought I was the only one.

It wasn’t until after high school when I joined the newly opened Gold’s gym in Mississauga, that I started to feel comfortable with my body. Probably because I could finally do a sport where I was competing only against myself. I was building my muscles and making myself stronger physically, mentally, and emotionally.

Another surprise was that I slowly grew out of most of my allergies after puberty and during my teenage years. What a relief to not be sick all the time.

When I first came out and started going to gay bars in Toronto in 1984, I started to feel more confident because I was having a lot of sex and getting a lot of positive feedback about my body and my sexual energy. Yay! Other attractive men liked me!

At the time there was something frightening happening in the gay world and it was too early to know what it was exactly. It was called GRID from 1982 to 1984. It wasn’t until Rock Hudson passed away from AIDS in 1985 did that name become prevalent and constant in the media.

Just as I was starting to feel comfortable about myself there was a f*cking disease that was killing gay men; the same gay men who were making me feel self-confident and attractive. It was a disease the Christian fundamentalists and right-wing politicians could use as evidence that I was not a human being and thus I was not entitled to equal rights.

The struggle was now an even greater one. The struggle was to disassociate gay men from sickness in the media and in the minds of weak-minded and ignorant people. It was no longer an individual struggle for self-acceptance. My body became part of the gay body collective.

I’ve always had a good amount of body hair, especially on my chest and stomach. Towards the late 80s, pornography and the representation of gay men changed dramatically. Until that point in time, it was the hairy man, the butch man, the mustached and rugged man who was celebrated in the late 70s and early 80s – especially in places like New York and San Francisco.

Subtly, pornography changed all that. The perfect male image was of a buff muscular man (who may or may not be taking steroids) who was shaved perfectly smooth, which somehow equated to cleanliness and being disease-free. That became the new visual standard of how gay men should look, and once again I didn’t belong.

For many years I would be turned down by gay men because I was too hairy. I figured out a way to deal with that – I trimmed my body hair. Shaving wasn’t for me, nor was waxing, which was one of the most torturous physical ordeals I’ve ever experienced. The pain-cost of waxing was too high a cost to buy a sense of belonging, solely based on my physical exterior.

History seems to repeat itself and in the late 90s Bears became a new sub-culture in the gay community. These were gay men who were hairy, who did not shave or trim and were generally speaking husky or overweight.

Essentially everything that was once considered ugly, reprehensible, and not sexy, became attractive to some. If you belonged to that group it became somewhat incestuous, mostly because there weren’t too many bears around.

Where did I fit in with all of this? I finally figured out what I liked about my body and I realized that what other men liked about me was okay, and it was good enough. I remember one night out at a club in Toronto a gorgeous man stopped me on the stairs. It was summer and I had my shirt off, proudly displaying my physique. “What a sexy, hairy chest!” he told me. It felt like that compliment was over 15 years in the making.

I share my story to be transparent and make it known that we all have a back story about why we believe our body is the way it is, or why we are striving to change it and become something else.

Stop and take some time to reflect, just as I’ve done here with this mini-memoir. Start with your childhood memories. Start with the relationships with your parents and siblings. Go back in time to high school when you were starting to develop more of your ego and identity having reached puberty.

Go back to that abusive relationship, that failed relationship, the person who said something to you so hurtful that you allowed him or her to damage your self-esteem for years.

Remember that moment when you felt confident, secure, and loved for you, and for your body. Knowing is important and the first step to making any positive change. You might be strong enough to make changes on your own, or you might choose to ask for help.

You only have one body.

Your body is as important as the air you breathe. Without oxygen, you die. The longer you starve your body of healthy nutrients, proper exercise, and self-love, the more it will decline.

“Take care of your body. It’s the only place you have to live.” — Jim Rohn.

Darren Stehle is the host of the Living OUT Podcast where Queer Thought Leadership meets personal growth and social justice. He is also the founder of Th-Ink Queerly on Medium. As a personal leadership coach, Darren helps gay men use their difference to make a difference: to lead others in creating a more humane world. Discover more at DarrenStehle.com.

Facebook105Tweet2PinEmailShares107
wpDiscuz
Share this ArticleLike this article? Email it to a friend!
Email sent!