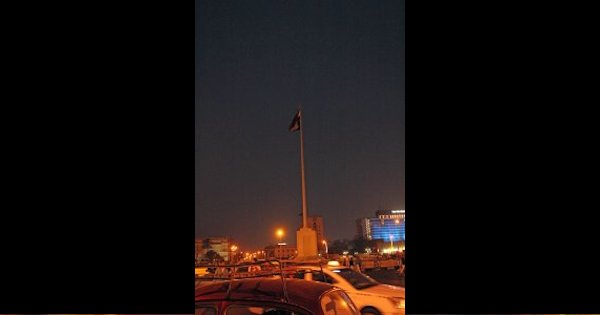 I set my packs down and piled up some cushions on the living room floor and promptly fell asleep. I awoke in surprise when the house-cat jumped on my chest and began to use it as a claw-sharpening post.

“Jesus!” I delicately removed the feline and wagged my finger at her.

I’m not a cat person. Sure, I’m into my lions, tigers, leopards and other apex predators. But house-cats? Just not my thing.

I resumed sleep and awoke in time to greet Ahmed. “I see you in the night,” he said and he headed out the door.

It was stifling hot outside and noisy. Traffic had picked up and with traffic comes that melodic tunes of horns blaring. I took a walk outside to try and call Hadeel, another local volunteer that Sherif had found to show me around this planet-sized city.

My aim was to stay for two days, see the pyramids, play for a ticket to Dahab in Sinai and head off to absorb the Red Sea and its bounties before reaching Taba. But Hadeel’s phone was off for the majority of the day so I ended up chatting with the building’s security guard who invited me to a lunch of falafel.

I returned home to escape the heat and lounged about, getting clawed on occasion by the cat. Which, turns out, was a mama cat with five kittens stashed in the darkest corners of the apartment. I fell asleep and awoke the next morning as mama cat pounced on her new hairy claw-sharpening post – me.

As the apartment was empty (Mohammed was away on a business trip) I headed out to try and get Hadeel on a phone but it was still turned off. So I got some falafel which I took home to eat while fending off mama cat.

After a catnap I finally managed to get Hadeel and we arranged to meet the next day somewhere in the city.

“I’ll send you the details on Facebook,” she offered.

Ahmed returned, said, “Hello,” and disappeared into his room.  And then something moved inside of me and I knew it wasn’t the good movement say, of a bubble of gas that needs to be released. This was something else. Something that had me going for the next 24 hours. The bathroom and I became well acquainted. I blame the falafel. And mama cat. Why the cat? Cause I can.

I was feeling a touch better the next day when Mohammed arrived.

“Where have you been sleeping?” he asked.

“Right here,” I wallowed on the cushions. My body ached like I was getting the flu.

“It’s a three-bedroom apartment,” he looked confused. “You have your own room. The cat’s room.”

Ahmed the ghost wasn’t exactly communicative. I was shown my new dwellings. Some kittens were relocated from the bed and I moved my packs into the room.

“There’s an air-conditioner too,” he pointed to the heat-destroying machine on the wall.

Mohammed was heading to the same area I was to meet Hadeel with another friend – and Ahmed – so I got a ride into town even though my body-ached and I felt that I was running a fever.

I sure hope it wasn’t malaria. For the two years I’ve spent in Africa, everybody around me had been taken down by one of Africa’s biggest killers (not died. As in, gettin’ hit by malaria and then taking two weeks to recover). And I was quite chuffed not to have succumbed to the mosquito-injecting parasite.