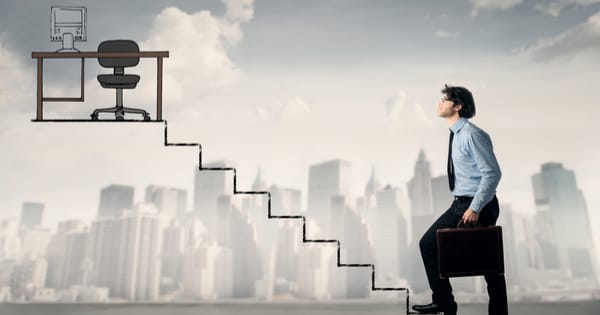 Those are the questions I started asking myself last year regarding entrepreneurship. Was I passionate about continuing this strangely unstructured, personal/professional journey… or did I want out?

The answer wasn’t as clear as I hoped it would be.

Entrepreneurship has always felt to me like a massive crank that took herculean strength, and significant time to turn. It required consistent sustained effort which did not necessarily guarantee momentum. Stops and starts meant I was constantly starting the process over again. It was never easy.

There were times when running the company was fun. It was sometimes exciting, always challenging, but often mundane. As years passed, timelines became familiar, experiences cyclical. I could anticipate busy and slow seasons. Big contracts were only temporary solutions. The stress was ever present.

The anniversary marks slipped by. Eventually, my time as an entrepreneur matched my time as an employee. They were achievements, yes, but they also felt like victories of luck and circumstance. Even if it was my hard work that had created the luck I was experiencing, I still hated how it always felt like last minute luck. That kind of anticipation and worry frayed me from the inside out.

From the day I went out on my own, I had a deep conviction abandoning entrepreneurship at any point, even temporarily, would be to admit failure. Those landmarks you hear about for small businesses, about how many fail in the first year, the first two, the first five… they were always at the edge of my perception. They leered at me. I didn’t need to be a millionaire, I just didn’t want to be a failure. It is a tainted existence, avoidance. There is no gratification or fulfillment, there is only constant, temporary escape.

It is a great paradox of my own life. I know how much I learn from failure, but I am so embarrassed by it I avoid it at all costs. And yet, the vast majority of things I did as a business owner were failures. Maybe not big, public, soul-crushing failures, but failures nonetheless. Sales processes I couldn’t make work, marketing tools that didn’t do what they promised, insurance policies more expensive than I needed, or too cheap to be effective. Fail fail fail. Over and over.

And yet, each year I made a little bit more money than the year before. I paid my taxes. Saved a tiny bit. Fell behind again. The victories did not fulfill me as much as the frustrations exhausted me. I felt incompetent at times. People closest to me knew, but it isn’t something entrepreneurs share publicly. The unspoken mantra of entrepreneurs seems to be “Pretend everything is amazing, hide all your worries.” I didn’t want to admit defeat or incompetence publicly. I was hungry and paranoid enough to keep moving forward. To keep pushing. Or in the overused parlance of brash entrepreneurs cranking out self-promoting content on the internet; I was “hustling.”

Life carried on. I met my fiance, moved in with her, and proposed. The struggles of my life I shared with her became things she witnessed for herself. We talked about next steps. Her career, my business, and our future. We talked about travel, quality of life and adventure, ultimately deciding to move across the country.

So began my prolonged moment of self-conflict; would I keep my business or get a job working for somebody else? Getting a job felt like giving up. Keeping my business felt like self-torture. While I had made a good living I was never comfortable. Worry was behind every decision I made. I knew I could keep going… but could wasn’t want. I was still trying to prove something to myself.

I had read enough books to understand success was almost always about determination and commitment. Talent was only a portion of the formula. Grinding away at something when everybody else quit, when all obvious options were gone, that was how you reached a goal. I worried quitting meant admitting I didn’t have what it took.

At the same time, I also knew “success at all costs” didn’t interest me. While I understood sacrifices were important, I was never going to be somebody who stuck with something he didn’t love just to be successful at it.

My mind created arguments against continued entrepreneurship: Six years of experience didn’t guarantee success in a new city. Despite my desire otherwise, nothing happens immediately. It would take time to establish a new network and find clients; time I wasn’t sure I wanted to invest. What kind of life would it be where I spent all of my time looking for clients instead of living my life?

Even though they were valid points, they originated in my brain and not my heart.

Going to work for somebody else though meant a massive recalibration of my own expectations and a dramatic repackaging of my skills. It had been years since I created a resume, almost a decade since I interviewed for a job. I had spent six years building out this very broad and unique skill set yet and I worried I had somehow become unemployable.

The ironic thing was after so many years of working for myself, of struggling through challenges, figuring things out, becoming more autonomous, learning to work from home (which took years), I felt like I was a better asset as an employee than I ever had been working for a company.

What about all of this equipment I had bought? It was more valuable for executing projects than whatever resale price I would get on the secondary market. The pile of gear weighing hundreds of pounds was a physical representation of how much the decision weighed on me. A monolith of potential guilt in the middle of my home.

Pros and cons. Back and forth. Unlimited stressful freedom versus predictable structure (stress amount to be determined later). Thousands of credit card points vs. cheap health insurance. And the biggest of all, working from home versus going back to an office. Working from home is an incredible luxury. And for two years I reveled in it until it eventually became isolating. The unbridled joy we all believe working from home provides has slowly waned. The Huffington Post and others have talked about the significant mental health toll it can take.

Security. Regularity. Connection. Clear expectations. Structure. All things I had grown to value so much… none of which I had.

There is also a lot of ego preservation I experienced while working for myself. My fiance asked me if I enjoyed what I was doing. And it was hard to tell. The gratification for me didn’t come in the day to day of running a business. Perhaps I am not naturally business minded, or don’t carry a general aptitude for entrepreneurship. But at a certain point, certainly, years in, wondering about that isn’t helpful. It’s just an added worry on a pile of more important worries. The only options are forward or out.

I didn’t often ask myself; “Why the hell am I doing this? To what end? To what benefit?”

When I left the corporate environment I felt caged. I wanted freedom. I had witnessed so many people around me work from home or for themselves and they seemed elated. Granted, in hindsight, many of them were introverts who preferred working from home and/or were not accurately representing how hard it actually is

But after I had achieved that freedom, entrepreneurship became about proving something to myself. That I could spin this straw into gold. My value as a business owner was always tied up in my ability to sign my next client. “A little further on from where I am now” seemed to be the only safe destination.

It is a destination that exists only in my mind. There are no guarantees. Just as going to work for somebody else is no guarantee of a better life. But, six years and six months after I quit my corporate job, I have started a new one. I am excited to get to work. To enter the fray. To learn quickly, adapt, and evolve within an existing structure with expectations and support I do not have to create from whole cloth.

I do not know what “defines” an entrepreneur, and frankly, I think we spend too much time trying to figure it out. My time working for myself taught me (at the very least) I have what it takes to learn what I need to do in order to succeed.

It is a faith it took me a long time to find. I hope I never lose it.

Facebook5TweetPinEmail1Shares6
wpDiscuz
0
0
Would love your thoughts, please comment.x
()
x
| Reply
Share this ArticleLike this article? Email it to a friend!
Email sent!