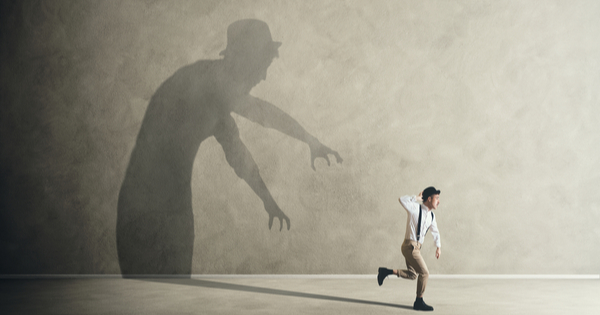 “The cave you fear holds the treasure you seek.” – Joseph Campbell

This week, I wanted to share a little about my personal relationship with the devious and dubious feeling known as fear. And to share a few ways that you can improve your relationship to your own fear.

But first, I want to speak a little about my Uncle.

This isn’t a TOTAL non sequitur…roll with me here.

My Dad’s brother is a curious creature. I love the man, but sometimes he can be difficult to tolerate in anything longer than short bursts.

One of the most endearing aspects of his character – and one I really wish I could coach (except for those pesky ethics of working with direct family and whatnot) is that he’s been married five times and divorced five times, yet he still loves nothing more than to give me advice on women.

Many years ago, before I even started working with a coach, to say nothing of becoming a coach myself, my uncle said this to me. I didn’t believe it then, and I d*** sure don’t believe it now.

Yeah, and I’m meeting Scarlett Johansson for dinner tomorrow night. I’m flying to her oceanfront condo in Cairo on the back of my airborne pig.

There are many different layers to the concept of fear.

Let’s flashback a few hundred thousand years. Our caveman ancestors probably thought twice whenever there was an angry saber-toothed tiger outside their cave.

Consider that this is the fear for your safety. You’re scared that you’re going to die because that tiger wanted to take out your family!

This isn’t the fear we’re talking about.

Granted, I think my biggest audience was maybe 25 people, but still. I speak well in front of people.

I believe it was Obama’s second inauguration. One of the most memorable moments to me was the performance by Kelly Clarkson. Admittedly, her music doesn’t do much for me, but I admire her for what she did on that cold morning in January of 2013.

To look out onto the National Mall at upwards of one million people has to be a terribly intimidating sight. I cannot imagine what that sight must be from the Capitol steps.

All Clarkson did was step onto the stage and belt – and I do mean belt – out the song My Country ‘Tis of Thee.

I think it’s pretty obvious as she approached the microphone that her knees had to have been trembling under her dress. “Just what in the blue hell have I gotten into?” she had to be asking herself.

Yet she stepped up and hit a grand slam that left everybody – including the First Family – in awe.

Did she defeat her fear? Nope. But she certainly fought her way through it.

I’ve accomplished a lot in the past couple of years. I’m working on more – way more – but things take time.

I want to propose five simple practices that you can take on to move past your fear to accomplish big things in your life.

Y’all, this entire year has been about testing the limits of my own comfort zone. Asking for money, feeling helpless watching my sister deal with cancer treatment a thousand miles away, going to court regarding the…let’s just call it, the souring of the relationship with my former landlords, all the way to singing karaoke and performing stand-up comedy – it’s been about expanding my comfort zone.

And when it comes to facing your fears, that’s all we’re talking about here. Expanding what you’re comfortable with.

It’s not magic. But the experience can be magical.

Face a fear today. What’s the worst that can happen? You might just amaze yourself as what you can accomplish.

Facebook9TweetPin3EmailShares12
wpDiscuz
0
0
Would love your thoughts, please comment.x
()
x
| Reply
Share this ArticleLike this article? Email it to a friend!
Email sent!