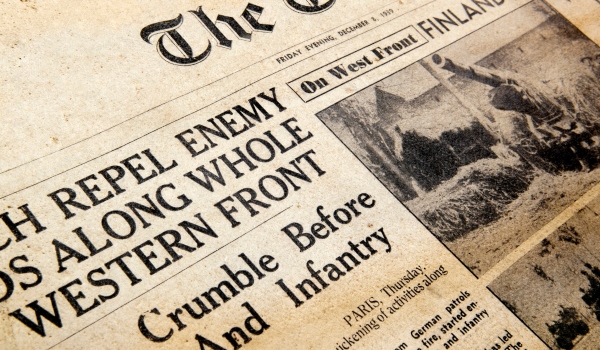 Ever since burglars learned to perform effective aerial assaults, society has been in a downward spiral. It’s unsettling to know that someone can fly in, sneak down the chimney and make off with all your hard-earned space credits. Good thing at 122 years old, you’re now considered middle aged and have some time to recoup your losses before retiring to the moon.

Historians often study what people in the past were like, but few stop to look at what they thought we’d be like. Stepping in to fill that role is St. Paul, Minnesota based writer, Matt Novak, who has kept a blog, Paleo-Future: a look into the future that never was since 2007.

With each entry, Novak guides readers onto a brief sojourn into the past where they can look forward at what our own society might have been. Inspired by a childhood trip to Disney’s out-dated “Tomorrowland” exhibit, Paleo-Future uses copies of primary sources and brief commentary to engage readers, many of whom may have grown up during the 50s, 60s and 70s, when the majority of the predictions showcased on the blog were first made.

Perhaps unsurprisingly, Novak says his most popular posts are those that are “wildly inaccurate.” This no doubt includes entries such as the 1949 article in the San Antonio Light newspaper, which predicted we’d soon see the city of New York entirely roofed over. The would-be development was touted as an ingenious way for scientists to provide “climate to order.”

Even stranger is a 1960 Chicago Tribune prediction that forecast we would soon have “Man-made balls of fire” in the sky that provided 24-hour sunlight. Novak rightly placed this entry in the “why the hell would you do that?” file.

But not all prophesies were out in left field; a few actually hit fairly close to the mark. Futurists writing for the Washington Post in 1910 envisioned a portable telephone, which would allow women to call their husbands after work and request that he “stop at the butcher’s on the corner and get some liver and bacon.” I’m not sure about the liver, but otherwise that sounds bang on.

So, who’s reading? Well, according to Novak, his most loyal following are academics. “I get a lot of emails from people asking about using material from my site for their classes.” This is despite the fact that Novak has no formal historical training and left school 3 credits shy of a degree in journalism.

Even if the subject matter is not for you, what Novak has created is an excellent model for historians looking to engage an online audience using primary sources. Following his recipe for a blog could help you set up your own successful project, so let’s look at a few of the nuts and bolts:

Is this type of work important for academics? Novak thinks so:

I think that the best thing that historians can do is research like hell and present something to the world that is otherwise difficult for people to access. That’s really one of the things that gives me hope. I truly believe that technology can improve people’s lives and that we’re moving in the right direction as a species when we feed this beast known as the internet; our collective brain.

I’m inclined to agree, so I’ve decided to make my own prediction for the year 2030: all historians will have engaging video blogs, complete with smell-o-vision, where they share their ideas with millions…on the moon!