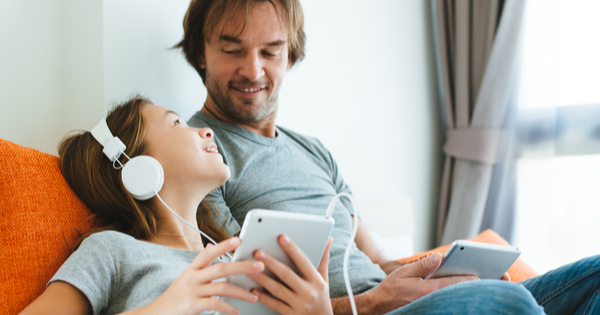 Raising children is not easy, especially if you have difficulties expressing your emotions. However, raising teenage daughters could even become more complicated, regardless if you have the help, love, and support of the entire family.

Children at that age are vulnerable, easily influenced by their entourage, and may have a distorted view of the world. They are often moody, emotional, and mainly think in shades of white and black, without considering any other colors in-between. So, if you are a dad looking to understand and create a stronger emotional bond with your teenage daughter, these tips could be of help.

Don’t try too hard on being the “cool dad”

For some parents, being cool and having a laid-back attitude toward their children comes naturally. Others seem to constantly struggle to make a joke and understand the “lingo” or, even worse, try to use it so they can look “cool”.

Believe it or not, all parents will be seen as uncool, awkward, and weird at a certain point by their children, so you cannot win this competition no matter how hard you try. Truth be told, your daughter needs a parent first and then a best friend, confident or pal. Try too hard to become your daughter’s best friend and you might lose your respect and authority in the end.

Therefore, you should establish some firm ground rules without being too strict or trying “to ruin their lives forever”. Don’t worry too much about becoming your daughter’s favorite parent because this title is subjective and will change every two minutes, depending on which one lets her use her phone before finishing homework, going out with her friends or buying that new dress.

Teenage girls are slightly more temperamental than boys but this doesn’t mean they tend to add drama to everything that is going on in their lives. For them, the problems they are facing may seem like life or death matters, so you need to be understanding, even though you have no clue about what’s going on.

Talking about periods, boys, “the mean girls” or body positivity may seem like uncomfortable topics, especially for dads but this doesn’t mean your girl won’t respect your opinion on them. Try to be as open as possible and talk about your feelings. Make her understand that each of her actions will cause a reaction and that some of them may not be positive.

Another tip to handle your emotions better is to tell your daughter whenever something upsets you or makes you happy.

Give a mature explanation to your decisions as a parent

At a certain point, your daughter will experience some behavioral changes which you may not embrace.

Talking to boys on the phone, thinking about skipping classes, quitting her once favorite extra-curricular activities or being interested in more “mature” topics are all part of her transition from a child to a young woman. So, whether or not you like it, you need to support her and trust her decisions.

If her actions call for some form of punishment, don’t forget that you’re the mature one and you need to argue all your decisions. Statements like “because I said so” or “I’m the parent, I know what’s best for you” won’t work and may have the opposite effect on your daughter’s behavior.

If you feel like she let you down or is about to make some poor decisions that might affect her future, explain why she has to be grounded. She’ll most likely tell you she hates you or that you’re the worst dad in the Universe but she will understand, in time, that you made the right call.

Some topics may still be a no-no

Regardless of how well you are going to express your feelings or how close you may feel your daughter, some topics will remain off-limits. And that’s OK. Your daughter is entitled to her privacy and she needs to figure some things on her own.

Luckily, she has a mother, a bigger sister or a friend she can talk to when it comes to sensitive topics like sexuality, eating disorders, gender doubts, alcohol, fashion, and whatnot. Don’t push it and respect her privacy. If she’ll feel the need, she will eventually tell you what’s been bothering her.

Be generous with praise

Most teenagers will go through an existential crisis before molding their adult personalities. And, since we live in an overly-sexualized and dangerous world for young women, chances are this crisis will start at an earlier age for daughters, even before puberty.

Many girls will battle with anxiety, eating disorders, and trust issues, and it is up to you to make your daughter feel safe, loved, and understood throughout these difficult years. Show your support unconditionally, even when she’s struggling to find out who she really is because that’s when she is going to need it the most.

Inforce strong morals and always believe in your daughter, no matter how she chooses to be. She may like pink and sparkly clothes but she may also become a genius researcher, doctor, IT developer or astronaut.

Show your daughter unconditional support and praise her as often as possible. However, bear in mind that there is a fine line between praising and letting her get away with everything just because she’s “daddy’s little girl”. Encourage her to make her own decisions and show your support, as difficult as it may be.

And, if you don’t want to encourage sexist behaviors in the future, replace some of your compliments regarding her looks to those regarding her personality and intelligence. Girls like to hear they are pretty but they will build more confidence if their dad tells them they are smart, important, and that they can achieve everything they want in life.

Let her choose how you’re spending your time together

Going for ice cream and cookies might have been your daughter’s favorite activity on a Sunday when she was 4 but we’re pretty sure her preferences have changed since then. One easy step to bond with your teenage kid is to let her choose how you’re spending your free time.

Express your interest in her current hobbies, even though they change constantly. One day she may want to take acting classes while the next day she’ll be into baking or checking pedals by sound-unsound.com. The key is to show interest and be open to new challenges!

This content is brought to you by Tudor Constantin.

Facebook10TweetPin1Email1Shares12
wpDiscuz
Share this ArticleLike this article? Email it to a friend!
Email sent!