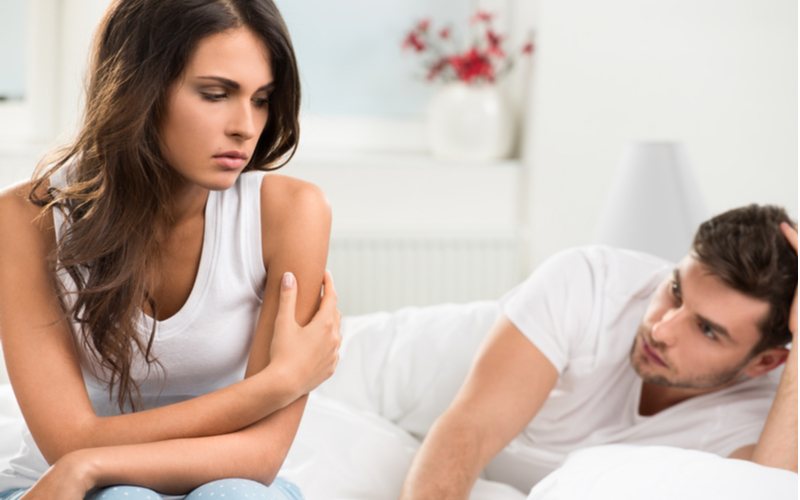 If you experience shame, guilt, or anxiety when having sex, you’re not alone. In fact, as a sex therapist, these are feelings that are discussed in my practice on a daily basis, no matter the presenting sexual difficulty.

Experiencing these harrowing feelings is one of the many reasons we suffer from low libido.

But there are ways to not let your emotions get the better of your sexual desire. One of them is understanding why these emotions impact your libido in the first place.

Shame is an all-encompassing feeling. When it’s sparked, we feel it in our whole body, we become red in the face, feel hot and sweaty, and want to be swallowed up by the ground beneath us.

A common topic that elicits shame in a lot of us, is sex. This sense of shame is tied to different aspects of sex, depending on who we are, where we’re grown up in the world and what our parents taught us about it.

We sometimes experience emotions during sex such as shame, because the mere idea of experiencing pleasure with our naked body, feels wrong.

Perhaps you grew up in a family where sex was taboo and dirty.

Maybe you were taught that sex was for reproductive purposes only, and to enjoy sex for the act itself was wrong.

Or possibly, your religious beliefs made you feel like any kind of sex outside of marriage was a sin.

Even if you’re an adult now, these ideas about sex might still affect how you feel about engaging in it, and cause an onslaught of shame when having sex with a partner (or two).

In western societies, sex is seen as more of a male activity than a female one. Men are seen as always raring to go and women are viewed as objects of desire – to be wanted but not to want.

Even if we’ve arguably come a far way regarding our views of sex and the genders, we’ve still got quite a bit to go.

For people who identify as non-binary, the shame can sometimes run even deeper, as representations of non-binary people having sex hardly exist in pop culture. This causes you to believe on an emotional level, that sex is for everybody else – except you.

Because sex is seen as a highly private matter, most people don’t talk about what they get off to.

This leaves things like depictions of sex in movies and tv as our only source of information on what’s considered “normal” sex and “abnormal” sex.

Just as we talk about the importance of representation in the media when it comes to race, gender and sexuality – representation regarding what we find arousing is important too.

You could argue that one medium that represents sexuality in all of its different forms – is pornography.

“But even if it showcases an impressive range of sexual stimuli, it doesn’t always have a shame-reducing effect on us as the medium is often seen as shameful in and of itself.”

When you feel like you’re the only person in the whole world who is turned on by something, or what you’re turned on by is obviously dirty because it’s only ever depicted in pornography – it’s easy to feel ashamed by your turn-on.

When you experience shame about what you like during sex, you’re actually experiencing shame about who you are – your very being. This is part of what makes shame surrounding sex so powerful.

Researcher Brené Brown describes shame in her TED-talk as the following:

Even though guilt is more about our behavior being wrong than our souls “being wrong” – guilt can have a large impact on how we experience sex and what emotions during sex come up for us.

Generally speaking, it’s seen as something men and boys engage in – not women and girls. Because of this viewpoint, girls are taught from a young age that they shouldn’t touch their genitals at all, because it’s dirty.

This leads to a lot of people who identify as girls, feeling guilty after they’ve masturbated. For some, the guilt is also there during the act itself – impeding their orgasm.

Guilt About Fantasizing During Sex

We don’t talk about it – but fantasizing during sex with a partner is common. In fact, for a lot of people, fantasizing is what tips them over the edge from enjoyment into the world of orgasm.

Because fantasizing is seen as a sign you’re not attracted to your partner, or that something’s wrong with your relationship, you may end up feeling guilty after sex.

“There’s nothing wrong with fantasizing during sex – even if it’s about someone else than the person you’re sleeping with. ”

If fantasizing heightens sex for you or is sometimes a necessary means to pleasure – have at it!

How Emotions During Sex Impact Your Libido

Because of the way shame makes us feel about who we are as sexual beings, who turns us on and what makes us scream with pleasure – it can lead to low sex drive.

“To enjoy sex and feel pleasure we often need to feel we’re worthy of it. Because shame is a strong emotion that removes all feelings of worthiness – it’s presence inhibits sexual desire.”

This leads to low libido and even difficulties with sexual arousal.

Guilt often arises as a reaction to what we’ve just done. For some, this means they don’t feel guilty in the heat of the moment, but rather after sex is over.

However, over time, the pattern of guilt emerging after sex, leads to sex becoming inextricably linked with something that makes us feel bad.

Time after time, the afterglow of sexual pleasure is quickly masked by the dirty feeling that what we just did wasn’t ok. And unless it’s the kind of “wrong” that turns us on – guilt can impede libido just as much as shame can.

Shame and guilt about sex is common and for some, the effects run deep. By understanding how negative emotions during sex can impact your libido – you can take the first step towards an increased sex drive.

Leigh Norén is a sex therapist with a Master of Science in Sexology. She offers online courses, sex therapy and free resources for a happier relationship and more enjoyable sex life. Leigh has been featured in Thrive Global, The Minds Journal, Glamour, YourTango, Babe, and more.