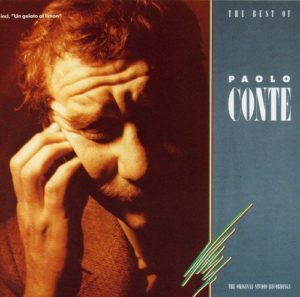 The pianist is smoking a cigarette — unfiltered, at that. He wears a tuxedo, but he’s got the face of a stevedore. His wrinkles are badges: love affairs without end, decades of siding with losers, a lifetime of nightclubs and half-drunk glasses of grappa.

His voice…does he have a voice? Does Tom Waits? Leonard Cohen?

A friend saw Paolo Conte in Venice. “Beyond good,” he reports. “Old guy, exceptionally cool, never without a cig in his mouth. Makes you wanna dance and do a lotta other things.”

I’d call that a recommendation. So I did my due diligence. And can report that Paolo Conte is the kind of treasure Europe knows about — and we’d do well to follow their lead.

Conte, born in Italy in 1937 to a family of lawyers, fulfilled his destiny and became a lawyer. But he was also such a jazz fan that he represented Italy in an international quiz in Oslo. (He took third place.) He worked occasionally as a bankruptcy clerk and developed predictable views about The Way Things Work. And then he started writing songs.

From the beginning, it was clear he had a poet’s touch. But it wasn’t until 1974, when he made his first record, that the words and the voice came together. Paolo Conte became that rarest of music business success stories — a singer-songwriter whose career begins when most pop musicians’ careers are ending. [To buy the CD of his greatest hits — greatest hits in Europe, all unknown in the United States — and get a free MP3 download, click here. For the MP3 download, click here.]

It’s pointless to categorize Paolo Conte. He’s a cabaret singer first, but he can scat like Louis Armstrong or Jimmy Durante. He’s a killer with a love song. He can write hook after hook. And though he doesn’t exactly sing, he’s at least as compelling as those other non-singers, Maurice Chevalier and Yves Montand.

A booklet thoughtfully translates his mostly Italian, some French lyrics. And there you can see a big part of his appeal. From a song about a lover, boasting about his woman:

Listen to me, you Neanderthal man.
Yes, or Tangier man.
Can any of you play
A giddy dance, a swaying dance
That takes off a woman’s shoes and stockings?

Or from ‘Sparring Partner,’ one of his best-known songs:

Of him, she says,
He’s a fool with no story
Whose memory is lost
In the bottom of his demented gloves.
But his glance is a veranda,
Just wait and you will see
How far it leads into the jungle —
Don’t ever meet it.

There are surprises. A song about lemon ice cream. A sudden burst of kazoo-like fake trumpet. Praise for a ’50s cycling champion.

Taken together, these touches give the man in the tux away. He’s a local guy, the talent too big for the town but who never left. He’s see it, done it, journaled it. And these are the songs of his life.

Lights down. Uncork that bottle. Paolo Conte awaits. After that, as my friend suggests, who knows?