Get Daily Email
Join/Login CLOSE
Home / A&E / Buttered and Salty: ‘The Call of the Wild’ – Review 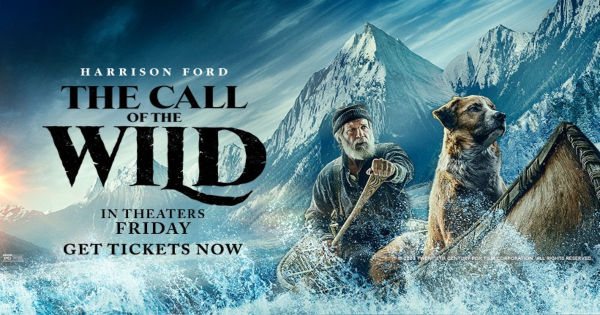 About halfway through the Disney/Fox picture “The Call of the Wild” I started getting distracted by assessing how the almost 78 year old Harrison Ford will look and sound doing the fifth Indiana Jones film, which starts shooting this summer. Such was my investment in the most recent adaptation of Jack London’s classic novel, a competent film that doesn’t offer anything particularly new in regards to either the source material or the family film genre.

Set in the Yukon wilderness, “The Call of the Wild” is the most recent adaptation of Jack London’s short adventure novel, in which there have been several. I suppose the fresh take on this one is that there is a mostly CGI dog playing “Buck,” the St. Bernard–Scotch Collie mix that is taken from his loving high society home in Santa Clara, CA and forced to quickly learn to adapt to survive cold winter nights and live and work in a pack society on the Yukon Trail. The CGI is not bad, but it is noticeable in parts. They do a fairly good job of basing Buck’s behaviors on that of an actual dog, so there is no burying his head in his hands or solving mysteries the adults can figure out. This is more “Turner and Hooch” than “Scooby Doo.”

Apparently 20th Century Fox/20th Century Studios/Disney used a combination of CGI and a real dog to create the personality of Buck. I personally think they should have leaned into using a real dog for 90% of the shoot and only used special effects to enhance a look on the dog’s face or an attitude. It’s hard enough to re-create a human face. With a dog you have to lovingly re-create a lot of an animals fur coat too. Difficult. We are close in the special effects world but not quite there yet and it shows. Particularly in the eyes, they always give it away.

The story is lovingly adapted by Michael Green (“Logan”) and directed by Chris Sanders (“Lilo & Stitch,” “How to Train Your Dragon”). They mostly honor the source material well, though I question a couple of their changes to the novel, like how Buck was taken from his family (which is much more realistic and sinister than in this version), but those complaints are few and far between.

The story doesn’t have a large ensemble of characters, but what we do have is solid. When Buck is first taken up north he is purchased by two French-Canadian mail carriers who train him to be a sled dog. Cara Gee and Omar Sy play the post masters and they bring a good amount of characterization to their limited screen time.

There is a mustache-twirling villain, played by Colin Woodell, that is so one-dimensional you look forward to him being dispatched as quickly as possible in one way or the other. I recall the character being in the original novel, but a character being mean for meanness sake doesn’t translate to a well rounded villain.

The real draw here is Harrison Ford, who gives one of his better performances of the last few years. He is emotionally invested in this CGI dog, so kudos to Ford for bringing it. Age hasn’t hampered the relate-ability factor with Harrison, who continues to have that sparkle in the eye and sly smile to win over even the most cynical audience member.

My main issue with this Fox holdover from the Disney acquisition is that it plays like a 90’s family film. There’s nothing here we haven’t seen a million times in multiple versions of this story or films like it, with the exception of a CGI dog, which they probably should have used less of and leaned more heavily into a real canine. It is a charming film, but a safe one. For many that will be enough to justify a fun day at the movies with the kids.

And for the record, Harrison Ford is in exceptional shape and yes, he will absolutely be able to play the whip-cracking archaeologist again.