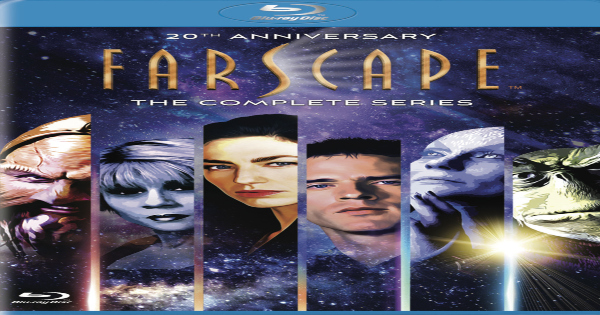 Farscape: The Complete Series is out now on Blu-Ray

I have watched many different science fiction shows in my life. Yet I can’t say I have seen one like Farscape. When I heard the complete series was coming out on Blu-Ray I hoped I would get to check it out. I was able to get a review copy and here is what I thought of it.

You can read the plot for Farscape here:

Astronaut John Crichton assumes he’ll be home in time for dinner. But a freak accident during an experimental space mission catapults him across a thousand galaxies to an alien battlefield. Suddenly, he’s trapped among alien creatures wielding deadly technology – a battle that 20th century sci-fi pop culture never prepared him for. Hunted by a merciless military race, Crichton begins his unforgettable quest for home.

This was a pretty amazing show. It took audiences on all kinds of adventures to some impressive planets. We got to meet lots of new races, and not all of them were friendly. This ragtag crew weren’t fond of each other at first, but over time learned how to get along. If you are a fan of this show then you will want to pick up this complete series box set.

Farscape: The Complete Series is available now on Blu-Ray. You can pick up this collection at Walmart and Best Buy.

END_OF_DOCUMENT_TOKEN_TO_BE_REPLACED

Facebook1Tweet2Pin2EmailShares5
wpDiscuz
Share this ArticleLike this article? Email it to a friend!
Email sent!