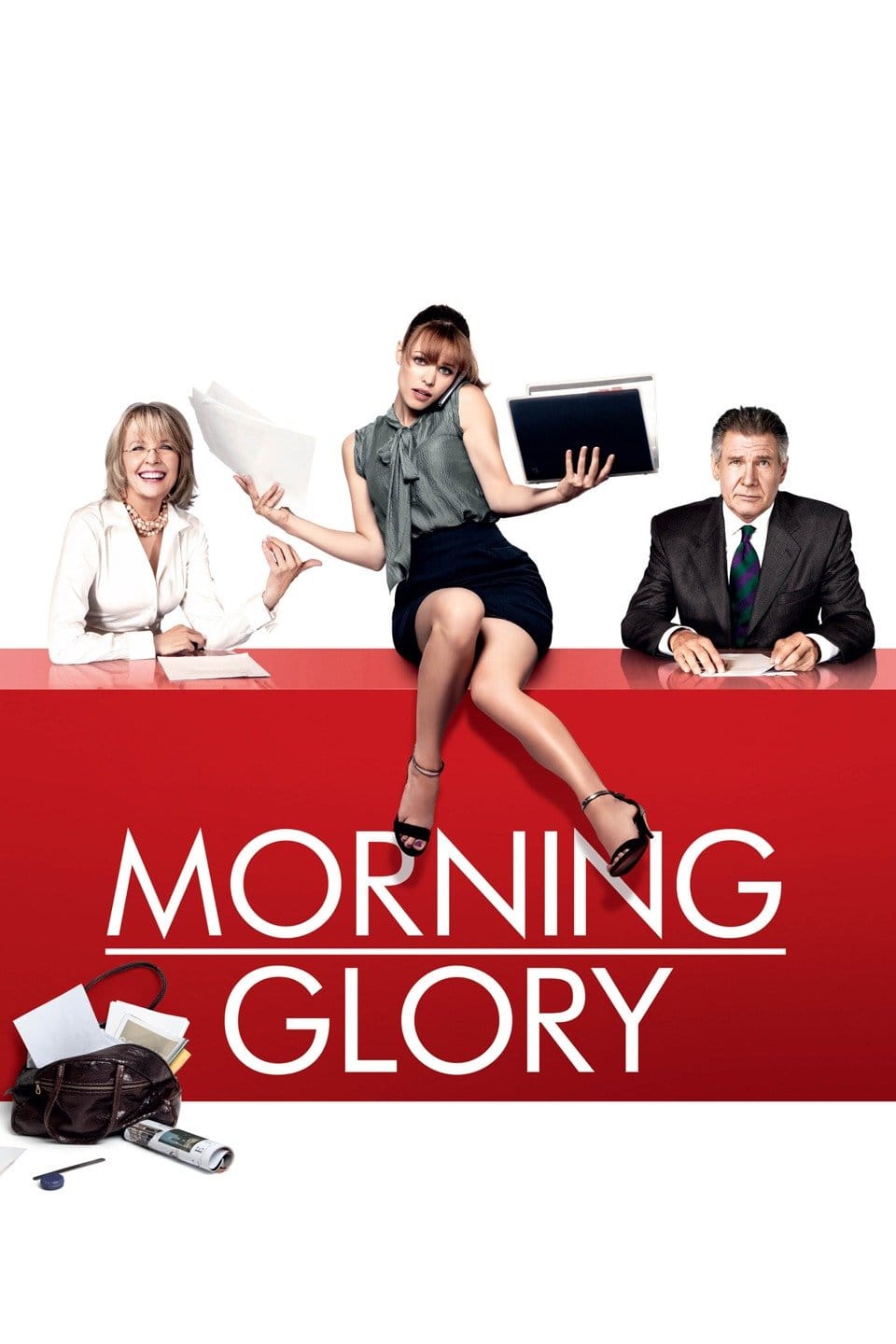 Sitting together after breaking a huge news story: young executive producer Becky (Rachel McAdams) and legendary news man Mike Pomeroy (Harrison Ford); Mike confesses that he forfeited all and alienated his family in the span of his award winning career. He acknowledges Becky, “I had nothing Until I met you.” McAdams reveals a warm smile. In the end Director Roger Michell’s “Morning Glory” arcs sublimely poetic from strong performances and deceptive chemistry. I’m a fan of Screenwriter Aline Brosh McKenna (“The Devil Wears Prada”)—what drew me to the theater along with the cast including wonderful Diane Keaton. This isn’t one of McKenna’s best. At times “Morning Glory” feels like an extended sitcom with the story about the resurrection of the network morning show “Daybreak”. Michell’s direction is stalwart and dependable, and benefits from McAdams’s star turn.

McKenna’s story is predictable, having spunky Becky Fuller (McAdams) as a long shot hire as executive producer for the floundering and dysfunctional “Daybreak”. Becky is so earnest and focused. We first catch Becky as the workaholic producer at a local news program, who must manage her social date calendar to awake at 1:30 am to go to work. Under contrived circumstance, Becky is fired from her job. Ultimately, duplicitous network executive Jerry (scattered and funny Jeff Goldblum) takes a shot on Becky as “Daybreak” executive producer. Becky must discern a path to raise the morning show’s ratings. She fires the a—hole co-host Paul (comically creepy Ty Burrell).

Hiring her personal hero Mike Pomeroy (Ford) may be the show’s salvation. A clause in Mike’s multi-million dollar contract prevents him from sitting this one out. Co-host and former beauty queen Colleen Peck (reliable and great Diane Keaton), is cynical of Becky’s selection, “Enjoy the pain, Gidget.” Becky is fumbling a possible romantic interest in Adam Bennett (charming Patrick Wilson), a news magazine producer who worked with Pomeroy, claiming he is “the third worst person” on the planet. Not surprisingly Becky runs into an impasse with Mike’s ego—the frivolous morning fare is beneath his gravitas. Adam reminds Becky, “You can’t change him.” No, you can’t change anyone. Transformation occurs out of knocking it off, and living into what is possible. With McAdams and Ford we cheer for this despite the narrative failings.

I’m a big Rachel McAdams fan. She is the life force of “Morning Glory”. She has an earnest authenticity whether she is adjusting the bangs over her pretty face or telling Ford’s Mike that he is an arrogant ingrate. Granted the romantic story thread with Wilson is thin; however, we get her clumsy vulnerability. Ford’s turn as Mike is formulaic cantankerous caricature at the beginning. However, Ford deftly evolves Mike as a lonely angry man, who realizes that he is not empty and can still contribute to all—which he really wants to do all along. He has a nice scene with McAdams, as he advises Becky not to sacrifice her life for her career. Their inspired chemistry elevates “Morning Glory” in the slow spots. Diane Keaton is amazing. Her Colleen could have been a shallow beauty queen washout. Keaton gives Colleen a self awareness and whimsy. Keaton is awesome as she raps with 50 Cent. Too bad that scene wasn’t longer. As in life, in “Morning Glory” people really don’t change. And they will surprise us with their humanity when they knock it off and get that we believe in them.

Facebook1Tweet2Pin1EmailShares4
wpDiscuz
Share this ArticleLike this article? Email it to a friend!
Email sent!