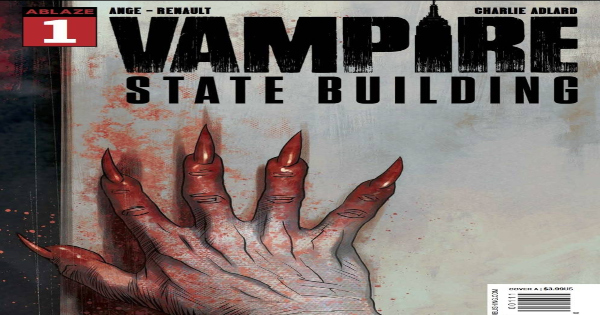 An ancient evil threatens the city in ‘Vampire State Building’

I have gotten to read some pretty amazing graphic novels lately. I can’t say I am a huge fan of horror, but I will read them from time to time. When I heard about Vampire State Building I was hoping I might get a chance to read it. I was able to get a digital copy of this graphic novel and here is my thoughts on it.

You can read the plot for Vampire State Building here:

Terry Fisher is a young soldier on the verge of being sent away for active military duty, and is going to meet his friends at the top of the Empire State Building for a farewell party. But suddenly a legion of vampires attacks the skyscraper and massacres its occupants. Hounded in the 102 floors that have become a deadly trap, Terry must take decisive action to save himself and his friends – and the city of New York – before the army of abominations, and the terrible vampire god within, walled in the building since its construction, spill into the city…

This was a pretty exciting graphic novel to read. The story begins simple enough, but once an ancient evil returns, things get real intense. No one is sure what is going on at first, and once they get some answers it only raises more questions. Once a drastic plan gets moved forward, a few people must get away from this building fast. As this story comes to a close, they find a way to save the city from a deadly creature. This might not be a graphic novel for everyone, but fans of horror should enjoy it.

Vampire State Building comes out July 7th. You can pre-order this graphic novel on Amazon and at Barnes and Noble.