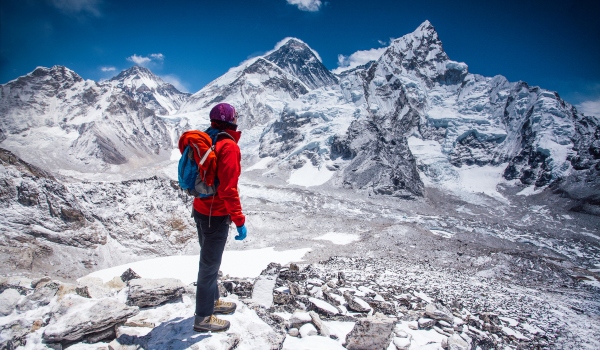 KATHMANDU – Mohan Bdr. Chand is at the sharp end of glacier research. A climate researcher at Kathmandu University, Chand is carrying out vital field work, looking at high mountain glaciers as indicators of climate change.

The work involves spending time clambering up and down the ice, taking measurements and readings to calculate mass balance – the sum of the snowfall which builds up on a glacier and the melting that shrinks it.

“Getting to a glacier can take five days from Kathmandu – two days driving and three days trekking”, says Chand, one of only a few native glacier specialists in Nepal. “We stay on the glacier for over two weeks at heights of between 5,000 and 6,000 metres. Conditions are tough, with altitude sickness a big problem.

“What we’re seeing is that almost all glaciers in Nepal are in retreat”, says Chand. “There are a few in the far west of the country which appear to be stable or increasing in size, but these – influenced by westerly winds rather than the Indian monsoon – are very much the exception.”

Calculating mass balance is seen as critical to understanding a glacier’s long-term behaviour. According to a 2011 study by the Kathmandu-based International Centre for Integrated Mountain Development (ICIMOD), there are an estimated 54,000 individual glaciers in the Hindu Kush-Himalayan region, an area of mountains stretching from Afghanistan in the west to Yunnan in southwest China in the east.

“The glaciers in much of the region show signs of shrinking, thinning and retreating”, said the study.

What is noteworthy is how little detailed knowledge there is of this region, which is considered to be highly vulnerable to climate change and to be warming faster than many other areas on the planet.

The region has been referred to as a “white spot”, a term in the 2007 IPCC (Intergovernmental Panel on Climate Change’s) Fourth Assessment Report used to describe an area with “little or no data”.

Confusion was added to the debate when, in the same IPCC report, it was suggested that the probability of the Himalayan glaciers disappearing by 2035 “is very high if the Earth keeps warming at the present rate.”

It was a claim the IPCC later said should never have been published, but one that was eagerly seized on by climate sceptics in efforts to try to undermine the whole body of the Panel’s work.

“In general plateau-type glaciers – mostly found in Tibet – seem to be retreating faster than valley types”, says Dr Mohan. “The number of glacial lakes at high altitudes is increasing, with between 20 and 26 in Nepal. If these burst, they pose a serious danger.

“Rising temperatures and sudden rainfalls of great intensity are factors that seem to be causing the retreat of some glaciers. But recently it’s been realised that black carbon could have a major impact on the mass balance of glaciers.”

Black carbon – particulate matter that in South Asia comes mainly from the burning of wood and waste and from cooking fires, or from coal-burning and diesel exhausts – falls on snow and darkens the surface, in the process reducing reflectivity and causing the surface to absorb more heat.

Most of the black carbon falling on the Himalayas and the south of the Tibetan plateau comes from the plains of India, while that of the eastern and northern sections of the plateau comes mainly from China.

According to recent ICIMOD estimates, black carbon is probably responsible for a large part – around 30% by some calculations – of glacial retreat in the region.

ICIMOD and other bodies admit there is far too little field data available to draw solid conclusions, whether on overall glacial melt or on the influence of black carbon. Part of this is to do with the inhospitable terrain. Also, in a tense region where transboundary cooperation is severely limited, studies that have been done often use differing methodologies.

Advances in satellite technology have significantly increased the volume and quality of data gathering across the region. However, satellite survey results have shown considerable variation, with one survey finding large glacial retreat and another a much smaller rate of melt. Scientists say there is often no substitute for fieldwork but admit that the extent of such activity is still woefully inadequate.

“We will return to the glaciers in May to take more measurements”, says Chand. It is gruelling work but needs to be done if a full picture of what’s going in the glaciers of the Himalayas is to emerge. – Climate News Network