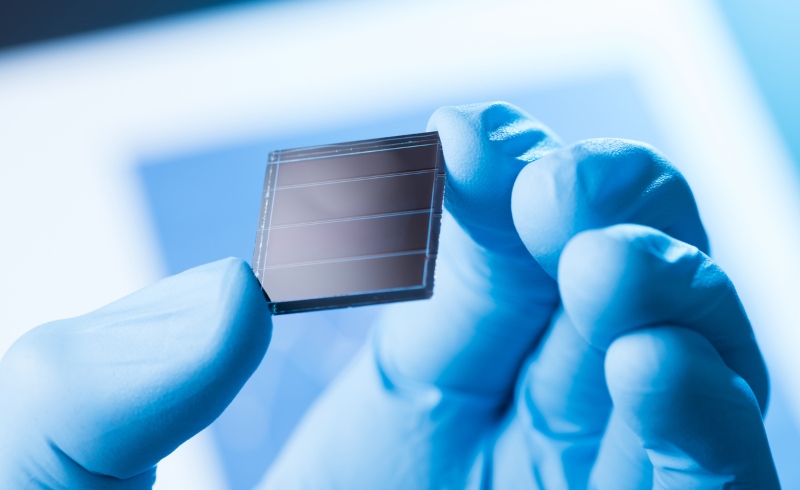 Dear EarthTalk: What is perovskite-based solar all about, and how does it differ from silicon-based solar?

No doubt, solar power has been growing rapidly, with a 28-fold increase since 2009. This expansion has been driven mainly by a massive reduction in the cost per kilowatt of solar-generated electricity. In many regions, it’s more economical to set up solar arrays than it is to create a new coal or natural gas plant. But how much further can we really take solar given that we’re already maxing out the efficiency of our panels and many regions of the world are still too dark to take advantage of them accordingly?

One answer might be perovskites. This calcium titanium oxide crystal found in the Earth’s mantle can be used instead of silicon as a semiconductor driving the capture and transmission of energy from solar rays to electricity. There are many different types of perovskites, but they all share the same general molecular structure. Recently, materials scientists have been working on ways to harness their unique electrical and photovoltaic properties to boost the efficiency of solar collection. They see this as an imperative, given that our current crop of silicon-based panels top out at only 20 percent efficiency in ideal conditions, and that’s after decades of research and development to optimize them.

In 2009 when research in perovskite-based solar was just beginning, panels made with the crystal showed efficiencies of around four percent. By 2018, researchers boosted this number to 24 percent. No other type of solar technology has seen an efficiency jump of this magnitude in such a short amount of time.

Several other properties add to the appeal of perovskite-based solar cells. They are relatively easy and cheap to produce, and are suitable for use in applications that silicon-based panels aren’t. Perhaps most important, they can generate electricity using wavelengths of light that most of our current commercially available panels can’t harness. Researchers envision a future where perovskite panels are actually fused into a layer on top of traditional silicon panels. In this tandem application, perovskite panels would capture part of the incoming light while the rest shines through for the silicon panels below.

Despite the promise of perovskites, there are still many hurdles to overcome before they can become a viable large-scale option. One is lifespan: Silicon-based panels last between 25 and 30 years, while perovskite versions created in the lab only last a year at most. Another issue is scalability. The high efficiencies in perovskite cells that scientists have observed have only been achieved on very small (“postage stamp” sized) panels. On larger perovskite panels, the efficiencies have been much lower. The final big obstacle for perovskite researchers to overcome is toxicity. At the moment, high-efficiency perovskite cells can only be made using relatively toxic compounds, such as lead. While less toxic versions exist, they are also less efficient.

Daunting though these challenges may be, many bright minds are working to solve them. While solar power’s future is by no means certain, it is looking increasingly like this powerful little crystal will play a major role in bringing sun-derived energy into the mainstream market.