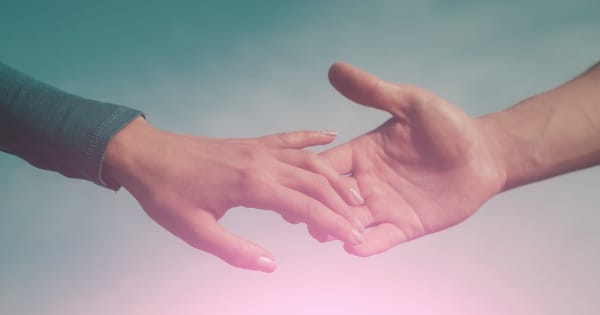 It seems counterintuitive to explore the etymology of touch.

The word is an abstraction.

Letters combined to embody a concept.

The feeling is real.

Touch is not something we think about, analyze, or try to understand.

Even if we tried, we couldn’t understand it.

Touch is not meant to be understood.

Touch can only be experienced.

A physical touch on our outer surface—our skin—triggers sensations originating deep within.

Touch can relax and soothe.

And touch can also hurt and frighten.

Words convey intention, but words can be crafted, twisted and bent around a need.

Touch conveys intention, too, but touch is innocent.

The touch of hatred, contempt, and abuse reveals itself—we sense the bitter even when the touch seems sweet.

Hurtful touch hardens us. We shrink back and down and into ourselves, pulling our vulnerable heads into our protective shell.

We may even learn, like trained animals, to fear touch, and to enjoy touch again may have to unlearn the associations.

The touch of love softens us. We lean forward and offer ourselves gratefully up to it, craning out necks and extending our waiting lips.

We begin to feel safe in another’s hands and arms, to trust, and finally to enjoy, as the touch of love flows through the impenetrable shell and lifts it off from the inside.

The roots of touch lie in the old French word touchier, which as a verb means to hit or knock and as a noun means “slight attack.”

The French understood much. For if touch can be a slight attack, than surely the moment of ecstasy can be le petit mort.

We know when we’ve been punched and kicked, and we also know when the arrow of love has hit us hard.

Both types of touch knock us and move us, and like an attack (though the attack may be the force of love advancing) cause us to respond and shift our position.

And in the shift, we realize we have been touched, acknowledge the feeling, recenter ourselves around it, and know we will never be the same again.