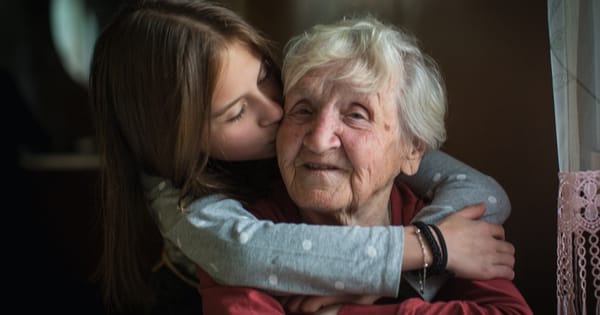 The human species is one of the very few, along with orcas and pilot whales, where females cease to be fertile after approximately 45 years of age. Since the ultimate goal of any living organism is to spread their genes, the evolution of menopause in women has been quite puzzling for scientists.

But what if menopause actually favored collaboration between generations? The grandmother effect hypothesis suggests that menopausal women might still be able to increase their genetic footprint, despite not reproducing anymore. They do this by helping their children to raise larger families.

Let’s do the math—parent and offspring share 50 percent of their genes, grand-parents and grandchildren 25 percent. It means that an increase by only two grandchildren would be about the same as producing an offspring of your own.

Historical human population data are valuable to study the grandmother hypothesis because detailed life-history events are recorded over multiple generations and family relationships are well documented. The positive impact of the presence of a living grandmother on her daughter’s family size has recently been shown in a study of pre-industrial populations of Québec, shedding light on mechanisms that could explain the evolution of menopause.

My research team, which includes first author post-doctoral fellow Sacha Engelhardt from the Université de Sherbrooke, used the population register of French-Canadian ancestors from 1608 to 1799 carefully assembled by demographers. The Catholic Church kept meticulous records of births, marriages and deaths, painting a unique portrait of this fairly isolated population.

Families were very large, with an average of eight children per family and some women bore up to 20 children. Of these, many would die before their first birthday. In some years, infant deaths rose above 30 percent.

It is interesting to ponder the factors that might counter such a frightening statistic, especially by looking at the beneficial role that family members—in this case grandmothers—can have on their relatives. The challenge was not only to have many kids, but also to ensure that they could reach sexual maturity and become parents themselves. Some help could definitely make a difference.

Having a living maternal grandmother increased the number of offspring born by their daughters by about 20 percent. It also had a positive impact on the number of grandchildren that survived to age 15. When a grandmother was alive, the daughter’s age at first reproduction also tended to be lower, expanding her reproductive opportunities.

Having a grandmother around to lend a helping hand seems to have a significant impact on child survival rates and on family size. At least this is what the grandmother hypothesis is all about. But church records, however meticulous they may be, provide no indication regarding the involvement of the maternal grandmother in the rearing of her grandchildren. After all, a grandmother may be alive but not helping her daughters at all.

While learning more about the interactive nature of family relationships at this time is the work of the historians and demographers exploring family archives, geographic proximity could be used as a proxy of a grandmother’s likelihood to help. The grandmother effect should get stronger as the grandmothers lived closer to their daughters. Québec is a large province with a harsh climate, and travelling hundreds of kilometers to help family members would have been a difficult task in the 1700s.

Distance therefore sets a limit to the grandmother effect. Although grandmothers did increase their daughters’ reproductive success when they lived close to one another, there was about one less child produced when the grandmother was alive but lived 200 km or more away from her daughter.

Another study conducted on a Finnish population also found some limits to the grandmother effect. They revealed that the presence of maternal grandmothers increased the survival of grandchildren, but that the effect decreased, and sometime had a negative effect on family size, when the grandparents were getting older.

The French-Canadian population has a known family tree spanning over centuries. The next steps will be to run genetic analyses to examine how traits linked to having large families are passed from one generation to the next.

The evolution of menopause is complex, and these studies help us understand how past selective pressures may have shaped the traits we express today.