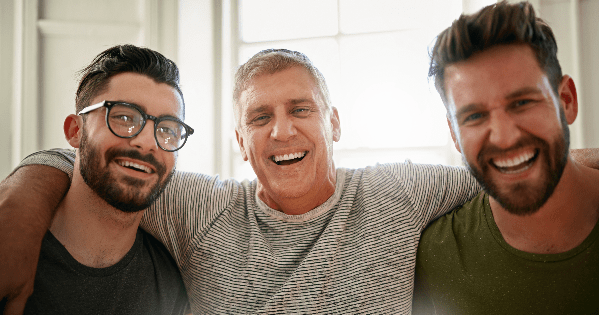 My wife tells me I have “Dad humor” and shakes her head. But she is smiling.

I do tell funny stories about our kids. Like the two-and-a-half-year-old son celebrating a successful poop in the potty like a touchdown dance in the endzone. More recently, I was helping him wipe his bum in the public restroom when his one-year-old sister grabs the urinal cake and almost takes a big ole bite. I knocked it out of her hands just in time! A close call may be a punchline the next day.

“Dad humor” does draw a lot of material from the potty, as well as bodily fluids in general, such as noticing my daughter had smeared her snot on my tie only after the meeting had started. I made a joke of it. Thankfully, there were other parents in the conference room.

It’s no laughing matter, however, that the media’s image of your typical dad is often Homer-Simpson-ish. The joke is at the expense of this bumbling fool who often becomes irate. One definition of toxic masculinity concerns the idea that any apparent weakness in a man must be overcome with his violent response. Instead of depicting men as utterly incompetent, we need more stories of fathers comfortable with vulnerability and in control of their emotions, especially anger.

I believe that part of the antidote to toxic masculinity is cheerful humility. Take the responsibility of fatherhood seriously, but don’t take yourself too seriously. The minute you think you are nailing this dad thing and you buy the loving apple of your eye the cutest t-shirt that reads “Cool To Be Kind,” you overhear said child informing a fellow towhead on the playground that his shirt actually reads “Do Not Share Toys.” You catch your fellow dad’s eye, and the two of you exchange a chuckle.

Or you find yourself at the back of the grocery’s checkout line at the bewitching hour of suppertime, and your kid is jumping up and down like her sneakers were spring-loaded and screaming to peel the paint off the walls. So, you give her the cookie or candy bar or whatever-the-hell else will end her tantrum and, as she ruins her dinner, you actually start giggling, for you remember years ago in this very same store when you swore that you’d never be that dad. Cheerful humility. We are always better parents before our actual children came along.

On the first Monday of every month, a few dads and I go out for some beers and many, many stories. We goof on each other and guffaw until last call. Last month, the subject of changing diapers was raised. Every single one of us had a story about catching pee right smack dab between the eyes. I come home and tell my wife about these “golden showers.” She wrinkles her nose, but she’s not merely humoring me. She knows those men are my tribe, my allies, and my sanity. True enough, the guys and I laugh easily. But the funny stories afford the chance to admit my shortcomings and relate to the mistakes of others. The true gift is the opportunity to keep my fear in check by chuckling, chortling, and realizing that I’m not alone in these feelings of anxiety and befuddlement, even helplessness. As my mentor, Brian Doyle, once declared, “We can laugh our asses off. … Let us use that which makes dark things quail.”

The following Tuesday morning, I told my wife that I shared with the guys the story of the urinal cake. Her smile is genuine. “You dads think you’re all so funny.”

Facebook18TweetPin2EmailShares20
wpDiscuz
Share this ArticleLike this article? Email it to a friend!
Email sent!