David Frum, who’s the kind of conservative I wish was heading the party, notes some distressing tendencies of Millennials – namely, that they’re more liberal, less patriotic, and less trusting. He then goes on to attribute this to the usual dubious studies showing that increased ethnical diversity causes people to be less trusting.

I think the answer is simpler: the Republicans have eroded the very concepts of “trust” and “patriotism” with their policies.

Now, of course, no single answer is going to sum up a whole generation’s tendencies – a full compilation of answers regarding “Why are Millennials less patriotic and trust less?” would include “cynicism generated from the Internet,” “the still-ongoing echo of independence from the 1960s counterculture,” “distrust of a government that’s often shown itself to be distrustful,” and a thousand other things. It’s never as simple as a single vector, and problem-solvers should always acknowledge that.

But the problem with the Republican party is that it’s forever trying to recreate the hard-work culture of the 1950s without incorporating all of those obligations that employers felt to workers.

I’m just old enough to remember the 1980s shocks of layoffs. There was a time when, if you got a job, you could expect to earn a decent wage from it for life. Think about how crazy that sounds today: you got one job, and you could, if you wanted, stay at the same company until you retired. Hell, my Dad and my stepdad both lived that particular dream.

That’s because, culturally, the idea of layoffs was something repugnant. People didn’t want to do it, because they felt some obligation to their employees – I’m not idealizing the worker/employer relationship back then, but there was some sense among the top executives that if you hired a man, you couldn’t just fling him out the door without a very good reason. And that reason was not “We need to look good for our shareholders this quarter.”

But the Reagan Revolution sold us on the idea that layoffs were good! They increased business mobility! They allowed people to get rid of the deadwood! They made it so you didn’t have to be so careful hiring people who you might have to keep for years! And so, within my lifetime, we’ve seen a situation where companies treat workers as disposable cogs…

Most people have jobs, now, but they’re on the lookout. They could be laid off at any moment. They could get fired. They don’t expect to be here for twenty years, or ten, or even five – at some point they’ll get a better offer and move on.

…and you wonder why this generation doesn’t trust? Hell, there’s a straight line to be drawn downwards, and you note it, David: “Just 19% of millennials say most people can be trusted, compared with 31% of Generation Xers, 37% of the silent generation and 40% of boomers.”

If you want patriotism, yeah, it sounds good to call to Kennedy and ask not what your country can do for you, ask what you can do for your country. But that Kennedy line was set in a time where the government did do things for its citizens, massive efforts: it helped soldiers everywhere get housing and education after World War II, because it felt an obligation to those who’d helped it.

The Republican party is not that government. The Republicans wrap themselves in a philosophy of sacrifice, but the truth is that the sacrifice is all on your end. Want a guarantee of a job? Can’t do that. Want assistance if the corporations decide to start hiring overseas? Can’t do that. Want some help if you fought for our country and need a hand? Uh, no, we just voted that down.

What I’d like to see would be a conservative call for obligation – not the slavering ass-kissing to the glorious job creators, but a serious questioning of the contract between employer and employee beyond just the paycheck. And then a serious analysis of what we owe to the men we ask to go and get shot, traumatized, and killed to protect US interests.

It’s all very well to spout the Ayn Rand line that we should all be self-sufficient, but telling us “You’re on your own” encourages neither patriotism nor trust. It encourages a cold-hearted analysis of one’s own interest, in true Ayn Rand style, which tells us that we should use people for our own needs and walk away.

And that’s the conservative culture. That’s the Tea Party, telling us that if you’re not rich it’s your fault, and only the hard-working will survive. That’s throwing this new generation into a snakepit – and it is a snakepit that Reagan and his ilk created. This distrust is the direct result of his policies.

Maddening thing is, there’s good bits in the conservative culture, a wellspring of charity and help to those they think are needy that doesn’t get highlighted enough. But when you say, “Nobody should take money from my pockets to give to the lazy!”, what you are saying in a very real sense is, “If you fall, you’re on your own.  And no government will help you willingly.”

Is it any wonder that the Millennials are hearing that message all too clearly?

Ferrett Steinmetz - @ferretthimself on Twitter - is a Nebula-nominated science fiction writer and C-list blogger who blogs about puns, politics, and polyamory at http://www.theferrett.com - that's two "r"s, two "t"s. His urban fantasy debut novel Flex, described as “A desperate father will do anything to heal his daughter in a novel where Breaking Bad meets Jim Butcher’s Dresden Files,” arrives on September 30th and is available for pre-order. He lives in Cleveland with his beautiful wife Gini, a friendly ghost, and a small black dog named Shasta.

Does anyone have an active definition of ‘liberal’ or ‘conservative’ that can be falsified? From what I’ve read, from my experience in life, and from the slurry of opinions that comes from the ‘left’ and the ‘right’… I don’t really see any use in framing a conversation with these words. A liberal can be an orthodox catholic and anti-abortion. A conservative can be an atheist and pro-gay rights. It’s got to get more specific than that before any common ground or disagreement can truly be reached. Until there are defining characteristics for liberals and conservatives, where ‘you believe this or… Read more »

My understanding is that liberals and conservatives are equally generous, but it largely depends on how the charity in question is framed. Read: http://www.forbes.com/sites/tomwatson/2012/06/01/giving-differently-liberals-and-conservatives-have-radically-different-views-of-charity/

My feeling is that we should spend less time debating who’s “holier than thou” (and I’m criticizing both sides here) and focus instead on actually promoting justice.

Republicans have undermined the concept of ‘trust’?

The Democrats have for at least a generation defined political ‘trust’ as blind faith in their policy of ever larger, more centralized, more expensive, and more intrusive government. Hard to trust government when it’s controlled by people who tell us that government has to follow its current trajectory, no matter what.

And of course, the fact that dissent quit being the highest form of patriotism when the former dissenters entered office hasn’t helped, either.

Let’s talk Jobs … the GM bailout? According to Forbes … “GM’s December 31, 2011 annual reportshows General Motors of North America accounting for 98,000 of the 207,000 GM jobs worldwide. But 12,000 of these jobs are in Canada and 11,500 are in Mexico. Accordingly, GM has 74,500 jobs in the United States and 122,500 abroad, even after Obama’s touted surge in Detroit jobs. Almost two thirds of GM’s jobs are in other countries.” “American manufacturing jobs to the trade-manipulating countries. Since January 2010, net exports to China have worsened by about $3 billion per month. That’s 30,000 middle-class manufacturing… Read more »

In response to Tom’s comments about respective charitable donations, he should have included that if you back out donations to churches and other religious groups, donations from the left and right are on par, and in fact have tipped to the left at times. Why would I back out religious donations, you ask? Well, the most obvious reason is that your church getting a new roof or a nicer altar is great, and good for you helping to make it happen, but I don’t think that’s what most people are thinking of when they lump it all into the category… Read more »

Mr. Steinmetz, I believe your analysis is completely incorrect. The conservative viewpoint is not the reason for why millenials are less patriotic and less trusting. The conservative stance on most everything is a limited Federal government that allows LOCAL communities to solve their own problems in a way that is most effective for the people living in those local communities. As the previous commenter wrote, conservatives are far more giving to charity than your average liberal. Liberals like to claim that they are generous and charitable… but you are not being generous when you are spending money earned by someone… Read more »

I haven’t even started reading the article yet and have to address something. “Millennial attitudes toward trust reflect the right wing’s teaching every-man-for-himself ideology” …. Where the heck did this come from? ” ….“ Nov 2, 2013 – Do conservatives contribute more time to charities? …. these facts:Conservatives donate 30% more to charity but earn 6% less than Liberals” “The fact is that self-described “conservatives” in America are more likely to give—and give more money—than self-described “liberals.” In the year 2000, households headed by a conservative gave, on average, 30 percent more dollars to charity than households headed by a… Read more »

I think the author is talking not about average citizens who are conservative, but about the politicians in office. Not people who are registered Republicans, but the leaders of the party.

As a rule of thumb, any time you find yourself saying “I haven’t read this article, but I’m going to comment”… just stop. Stop, don’t type what you were about to type. It won’t help.

How ya doing Noah? I usually do stop and read first but this time around, when something that’s being said that relates to me personally (not directed at me personally), I’m going to say something. As it stands, the article followed my initial thoughts as to where it was going to go. You are right though, I should have stopped and not wrote anything because it has been my plan to stop writing and responding all together. Unfortunately GMP appears in my eyes as being a place where I’m feeling less comfortable. I represent that which doesn’t fit the typical… Read more »

“But the Reagan Revolution sold us on the idea that layoffs were good!” Simply untrue. The very real issues you cite are systemic in nature. They span both political parties. Both Dems and Republicans are in the pockets of the wealthy and big corps. President Obama and his Dems get just as much $$$ from Wall Street as the Republicans. We have a new elite in America who only care about themselves. In my opinion the biggest issue is my boomer generation’s attitude of entitlement and greed. Remember, when President Reagan came into office marginal tax rates were 90!. Yet,… Read more » 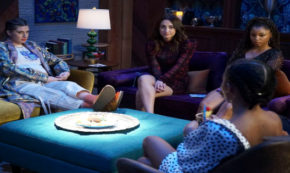 END_OF_DOCUMENT_TOKEN_TO_BE_REPLACED

Facebook141TweetPin2EmailShares143
wpDiscuz
Share this ArticleLike this article? Email it to a friend!
Email sent!