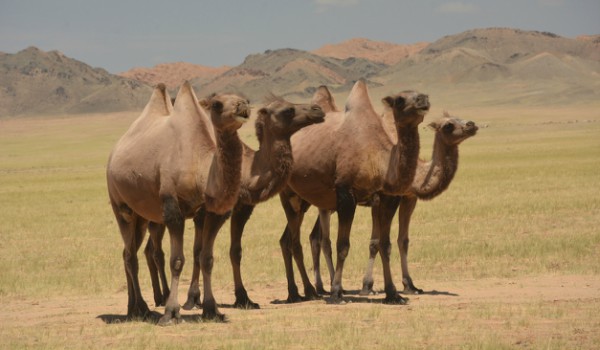 DELHI, 2 September, 2019 − The battle to halt the march of deserts across the world and the spread of degraded land, which lead to mass migration, is the focus of 169 countries meeting in India from today.

The annual United Nations climate change convention, held every year, receives massive media coverage. In contrast the UN Convention to Combat Desertification meets once every two years to combat the spread of deserts, land degradation and drought. Its success is vital for more than half the world’s population. But it gets little attention.

Four out of five hectares of land on the planet have been altered from their natural state by humans. Much of this alteration has been damaging, making the land less fertile and productive.

This degrading of land and the spread of deserts are already affecting 3.2 billion people, mostly in the poorer parts of the world. The UN says this degradation, together with climate change and biodiversity loss, may force up to 700 million people to migrate by 2050.

Four years ago the parties to the convention agreed to reverse the continuing loss of fertile land and to achieve land degradation neutrality (LDN) by 2030. So far 120 of the 169 countries affected have come up with plans for how to reduce the risk of degradation and where to recover degrading land (known as LDN targets in the conference jargon).

“This is a poor convention for poor people from poor countries”

Although Africa usually springs to mind as one of the continents worst affected, much of South Asia with its recurring floods, droughts and other extreme weather events is facing a range of problems related to land. Coastal areas right up to the Himalayas suffer land degradation, and the problem involves all the governments in the region.

India, host to this year’s conference, has a major problem, with 30% of its land affected. It has 2.5% of the Earth’s land area, yet supports 18% of its total human population and roughly 20% of its livestock. But 96.4 million hectares (almost 240m acres)of India’s land is classed as degraded, nearly 30% of its total geographical area.

A study published in 2018 by The Energy and Resource Institute (TERI) for the government of India put the cost of the country’s desertification and land degradation at 2.5% of India’s GDP (2014-15).

This year a robust response is planned. “To fight this menace, India will convert degraded land of nearly 50 lakh (5m) hectares to fertile land in the next 10 years; it will implement the provisions of the New Delhi Declaration which is to be adopted at the end of the conference,” Prakash Javadekar, India’s minister for environment, forests and climate change told the Climate News Network.

The land due for conversion is just 5.2% of India’s total degraded land, but the minister hinted that the target could go up before the conference’s final declaration is agreed on 13 September.

Another south-east Asian country, Sri Lanka, has arid parts which are drying out further, and wetter regions which are becoming wetter as erratic rains and high temperatures have made the soil vulnerable.

“Sri Lanka has about one-fifth of land which is either degraded or showing signs of degradation,” said Ajith Silva of the environment ministry. “We are carrying out various government schemes that have a focus on soil conservation in plains and watershed management in hill areas,” Silva told the Climate News Network.

Sri Lanka has set a target to restore and improve degraded forest: 80% in the dry zone and 20% in the wet zone. Just as in Sri Lanka and India, Nepal, Bhutan and Bangladesh also have targets and programmes aimed at land restoration.

While governments have targets, local people, realising the dangers to their way of life, are acting independently and taking their own actions to save their land. Dhrupad Choudhury, of ICIMOD, the International Centre for Integrated Mountain Development, said: “Many good things are taking place across these countries. But apart from government efforts, those that happen at the community or village levels are not recognised.”

Across South Asia most government programmes are planned top-down, with almost no community partnership. Without ownership by the community, an important stakeholder, these remain poorly implemented. Many NGOs, on the other hand, do it right.

There is some resentment among the countries affected by desertification that their plight gets scant attention and very little finance from the richer states untroubled by deserts. An official of one of the South Asian nations commented: “This is a poor convention for poor people from poor countries.”

Javadekar, the Indian minister, said he believed there should be public finance from the developed world for land restoration. But to help to plug the gap he announced plans for a Centre of Excellence for Capacity Building of Developing Countries, to be created in India to help developing countries to achieve land degradation neutrality, with India offering training to other countries on financing solutions.

To try to move things along, the convention has already adopted a gender action plan and is working on innovative financing opportunities and ways to improve communications.

The Indian prime minister, Narendra Modi, is likely to make an appearance at the 14th Conference of the Parties, as the Delhi meeting is formally known.

With the New Delhi Declaration due to be announced, India has already said it will, as the host of the conference and during its two years as the convention’s president, lead from the front to ensure its goals are achieved. − Climate News Network

Facebook27Tweet1Pin1EmailShares29
wpDiscuz
Share this ArticleLike this article? Email it to a friend!
Email sent!