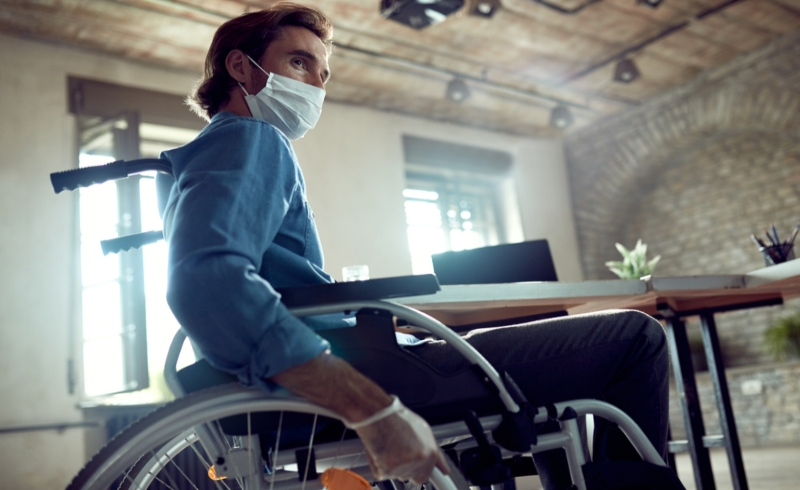 I recently had the pleasure of participating in a virtual open mic event produced by my employer, ServiceNow. This event was part of the company’s efforts to help our now-totally-remote workforce to feel more together and enhance team spirit.

My “talent” was just reading a short section from my book “Deaf Daughter, Hearing Father.” I read about the time my when my 7-year-old daughter Miranda asked me — out of the blue — if I wanted a deaf daughter.

The book, published 15 years ago by Gallaudet University Press, was written for a very specific audience — parents of deaf children. However, the section I read could be appreciated by the general public, giving everyone a real idea of the challenges and issues, as well as the beauty and benefits, of raising a deaf child when you’re a hearing parent.

Making yourself vulnerable when sharing deeply personal stories with colleagues

One always feels vulnerable sharing deeply personal stories with co-workers, but I made the decision 15+ years ago to share this story with the public, so I was willing to experience that uncomfortable feeling of “putting myself out there” with the hope that others will learn something. In this case, I wanted to nudge the company and my colleagues to be open to employing and working with people who have disabilities and require a certain amount of accommodation and understanding.

Writing the book was part of my advocacy for the Deaf community and I’ve continued to advocate even though my Miranda is now a successful adult (a mother, a teacher with a Master’s degree, and a Helen Hayes-award-winning actress).

I started nudging ServiceNow a few years ago to include open captioning in all of its videos to address the accessibility issue. I was saying that not only does open captioning benefit the Deaf, but also people with some hearing loss, people for whom English is a second language, and for hearing people who just want to watch a video on their PC or mobile without the audio.

I’m proud to say that after repeated and consistent reminding, ServiceNow now almost always includes open captioning with its corporate-produced videos. Our Chief Talent Officer Pat Wadors has been very supportive of this initiative and an inspiring leader who “walks the talk.”

With that success in mind, I’m continuing my lobbying efforts by sharing another short section from my book with you (a general [business] audience member). I have the same hopes that exposure will lead to more accessibility for and openness to employing people within the disabled community.

WARNING: the story I’m about to share is true and infuriating

Below is a snippet from the section of my book that’s titled “Shame on the Ontario Medical Association.” A little background: I worked at the OMA 25+ years ago before moving from Toronto to Silicon Valley so my daughter could attend the California School for the Deaf in Fremont.

“…In the mid-1990s, I worked for the OMA as a supervisor of support services. In this capacity, I began to lobby for the OMA to hire disabled people, particularly deaf workers, since I had become a ‘signer.’ I had some limited success with hiring a casual employee (a.k.a. a temp) who was a Deaf student (our babysitter Hao Wen Kong).

“If you thought like I did, that the OMA would have been receptive to this idea, you’d be sadly mistaken. People are people whether they’re working for a big corporation or a small nonprofit. We all need to be educated and enlightened. We all need our prejudices exposed and our preconceptions challenged.

“I wanted to be an agent of change and progress. So when a position under me became available, I lobbied for our human resources office to contact the Canadian Hearing Society (a nonprofit advocacy organization…) for resumes from unemployed deaf candidates. I actually found a candidate who had more than enough qualifications and appropriate experience for the shipping room position and wanted to interview him but was shot down by my immediate supervisor when I informed him that the candidate may not have any oral skills.

“I contacted the human resources folks [at the OMA] and soon was in hot water for complaining about my boss’s blatant discrimination. Then I was accused of discriminating against women…[I guess the rationale was the guy I wanted to interview was a male.] Now my supervisor was investigating me! Yes, the OMA, a union of physicians in the province of Ontario, was allowing job discrimination against a disabled person to occur and then trying to bury the whistleblower. I was pretty naïve.”

Well, I don’t have to tell you what happened next. It was basically, “Shut up or we’ll terminate you.” OMA leadership eliminated the position to try to avoid any possible blowback, so no one was hired and I had to work the next year short-handed. Needless to say, I was happy to leave that organization a year or so later when I moved to California.

I made the mistake of assuming that Ontario, Canada in the 1990s was more progressive than it really was. It’s true the province had elected the world’s first culturally Deaf person in Gary Malkowski — my neighbor, my friend, and my representative in the Ontario Provincial Parliament — but that really was not a true barometer of (business) people’s thinking and values.

It was a few years later before “my former supervisor got fired for some reason unknown to me, but I’m sure it was for some equally stupid misbehavior…People with disabilities have so many hurdles to contend with already, and then they have to deal with boneheads like my former boss who throw up even more roadblocks. Even though it is morally reprehensible and, in fact, criminal, they still seem to get away with it.”

Now, it’s 2020 and we should be doing better, but are we? I’d like to think that the prejudiced thinking of my former OMA leaders is a think of the past, but I don’t want to be naive again, so I think it’s going to take continuous pushing by advocates. What are you doing to help?

As the Coronavirus-afflicted economy continues to turn south, I think it’s important that organizations, particularly corporations, be sure to consider diversity, inclusion, and belonging (DIBs) as vital as ever to hiring practices. And I hope DIBs-focused administrators and activists won’t forget that people with disabilities should be a key constituency in their campaigns — not an afterthought.

In my opinion, ServiceNow is walking the talk regarding diversity, inclusion, and belonging. I wouldn’t go on the record if they weren’t. Trust me. And I’ve appreciated and learned so much from the DIBs training I’ve received, provided by the company. In my efforts to be an ally and to have courageous conversations with my colleagues, I’ve written about some of the workplace hot topics (discrimination, white male privilege, sexual harassment, etc.). This blog is one in a series of five. My four other blogs are: