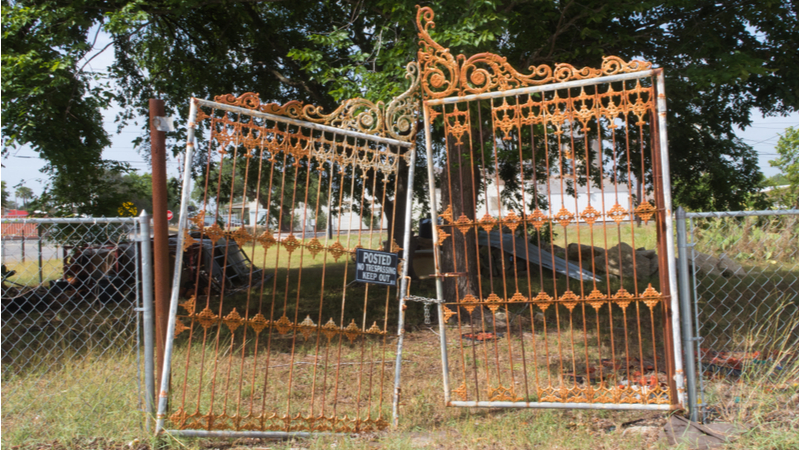 I distinctly remember an evening in October 2016.

I was taking the girls on an evening walk around the neighborhood. There were two consecutive houses that had Trump signs in their yard. One of these yards also had a medium-sized cross in front of their door.

All of this left me feeling terrified.

Terrified of these voters. Terrified of what they said and thought about people like me, like my students, and like those I care about. Terrified of being in close proximity to those who loudly announced their support for Trump, a man who had spouted nothing but hatred. By October 2016, Trump had belittled and harassed disabled people, immigrants, women, and had led “LOCK HER UP” chants.

These signs and this cross left me thinking about the history of oppression and remembering every day how acceptable oppression has always been in the “land of freedom.” Christians in the United States have almost always been in the frontlines when it comes to keeping others (and even themselves) systematically oppressed.

Modern conservatism was born as a way to preserve racism and other forms of oppression, after all.

While taking my dogs on a walk, I shared my feelings of being horrified at these signs in social media posts, along with comments that such citizens would have likely joined past hate groups and would have supported past historical atrocities, namely lynching and segregation. Such examples were especially on my mind as I was scheduled to defend and officially finish my Ph.D. in African-American History the next month.

The reactions I received still shock me given all of the horrors Trump had already committed by October 2016.

I regret to say that receiving such reactions from people, people who generally didn’t support Trump, had a silencing effect on me. I hadn’t realized this until searching my Facebook archive in preparation for this piece. I subsequently didn’t share political fears as often, and realize I sometimes even wondered if I had indeed overreacted.

Of course, if anything, my initial “overreactions” weren’t “overreacting” enough. All of my feelings were rooted in rational, now actualized fears. Trump has harassed Barack Obama for being Black, separated families and kept them in cages, bribed politicians, mandated discrimination toward Muslims, made fun of veterans, wanted people to die of COVID-19, lied about everything, and much more.

In the aftermath of the terrorist attack on the nation’s capital, I’m wondering even more about the people who still have Trump signs and flags in their yard. They are still up everywhere where I live. Some people are even flying what at first glance what might appear as the United States flag but it has “T R U M P” printed in large, bold type on top of the stars and stripes.

This iconography is still up.

After seeing Trump in office for four years, after knowing that Biden will be sworn-in as the next president in a matter of days, and after terrorist mobs had plans to assassinate the nation’s top officials. After fully knowing what Trump stands for. After all of this. People are still proudly announcing support for a president who has continued to break laws, for a president who has been impeached, for a president who gleefully and constantly degrades and insults humanity, even his own supporters.

Trump supporters are still loyal to him, not to the United States.

I am left wondering: Are the individuals still supporting Trump guilty of a kind of treason, of betraying the nation? When does their duty to uphold and support the laws of the United States of America begin?

As highlighted by a friend, this question is made complicated by recognizing that the United States has never actually prioritized and actualized its claims of freedom for all. Moreover, white people in the United States have always been held to different, lower standards. Said differently, the thousands of Black and Brown people lynched during the nadir of race relations (often as part of church services) were murdered by treasonists, but also, by people who were doing exactly what they were encouraged to do by the backward mores of their time.

Of course, there is the unfortunate problem of “fake news” being completely legitimized by right-wing media, such that many don’t realize that they’ve been brainwashed. We’ve reached a point where at least a significant amount of what the typical conservative believes is inaccurate, deliberately wrong and deliberately designed to be divisive. At what point are people responsible for thinking critically about the world and for knowing better, especially when it comes to absurd conspiracy theories like the one in which the basements of pizza restaurants were being used for human trafficking allegedly lead by Hillary Clinton and her allies.

Regardless, we need some way to re-acculturate people who have such tight loyalty toward Trump. Fox News and other alt-right media groups need to face regulations and should be held accountable for their crimes against humanity. Education teaches critical thinking and empathy, and education must be prioritized.