—
J.R. and Shannon catch up with our friend and fellow autism podcaster Elijah Winfrey of the Elijah Winfrey Show (Tuesday’s on Blog Talk Radio). It’s hard to believe but Eli and his co-host, the lovely and very talented Toni Boucher, are now in 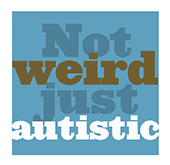 their fifth season of interviewing guests and talking about all things autism.

Elijah, from Washington State and Toni, from South Carolina, are two of the most talented people you will ever meet. Toni is an Autism Advocate, author speaker and consultant, while Elijah just retired from playing touring golf.

Not the PGA, but a lower tour up in the Pacific Northwest. The great thing about Elijah is that instead of having his bag decked out with logos of sponsors, he has his covered in things having to do with autism.

“Guys don’t like to talk about home and their autistic kids,” Elijah told us, “And this bag was a way to start a conversation with people.”

But Elijah isn’t completely done with golf just yet. He’s set up the Eli VS circuit. Ten events to raise money for his nonprofit, Team Winfrey.

Five of the events will be competitive matches, while five will be friendly matches, but one thing remains the same. He’s still talking autism at all ten events.

You can also get involved by supporting Team Winfrey on Amazon Smile, a program where Amazon donates a portion of what you spend on their website to the charity of your choice. All it takes is a moment to sign up.

We talk about a whole lot more with Elijah, but to find out what it is you’ll have to listen! Listen Here!

Use the comments section at the bottom of the podcast page to start or join the conversation.

As always, don’t forget to hit the subscribe button to be the first to know about the latest content.

Thanks for being the best part of Not Weird Just Autistic!
—

This post was previously published on Not Weird Just Autistic and is republished with the permission of the authors.