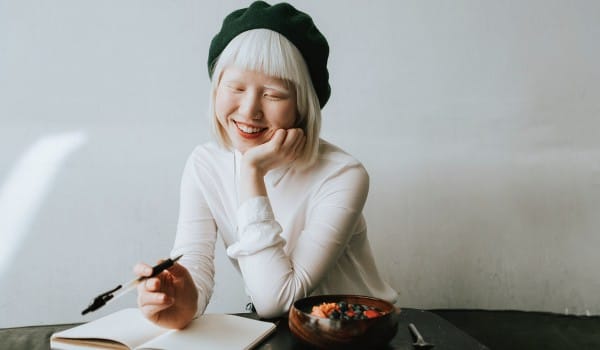 Haiku is a positive habit that can help you achieve a state of happiness. It’s an old form of Japanese poetry. Haiku is a short poem inspired by the emotion of the moment.

A haiku in Japanese is extremely short so that it is recited in one breath, writes Bruce Ross in his book, Haiku Moment: An Anthology of Contemporary North American Haiku.

Haiku is minimal. And guess what, the poems are usually in three lines that try to capture a feeling or an image. There are no more than 17 syllables but a simpler, “freestyle” version of haiku can be about absolutely anything.

The constraints of haiku forces choose your words wisely. Every line must express your feeling in the simplest way possible. Sono Uchida, one time President of the International Haiku Association explains:

Haiku has also developed as a poem which expresses deep feelings for nature, including human beings. This follows the traditional Japanese idea that man is part of the natural world, and should live in harmony with it. This differs considerably from the Western way of thinking, in which man is regarded as being independent of, and perhaps superior to, the rest of nature.

In Japanese, haiku are traditionally printed in a single vertical line while haiku in English often appear in three lines parallel to the three phrases of Japanese haiku. Haiku is easy to embrace as a happiness habit because they are short. This statement by T.S. Eliot captures the meaning of happiness in the simplest haiku possible:

… happiness — not the sense of well-being,
Fruition, fulfilment, security or affection,
…but the sudden illumination…

Haiku as a habit can change your approach to life and living it. In just a few words a day, you become more present, express how you feel, and get closer to your inner self. “Every day is full of haiku moments; the only question is whether we are able to slow down long enough to catch them before they vanish,” writes Lou Freshwater.

Haiku offers emotional liberation for many Japanese men and women. They use haiku to contemplate the peacefulness of nature and to find a way to express their feelings.

Walking by the river,
embracing the simple life…
filled with gratitude!

As a practice, it teaches calmness in a busy world. The idea is to stay contained in the emotion of the moment. Haiku as a habit can help you put your worries into perspective. Some experts see haiku as an excellent way to practice mindfulness.

Haiku as a happiness habit

Yes, just three lines of everyday poems in a journal help you stay in the moment in your pursuit of happiness.

You can use haiku as a way to relieve pressure in on your busy brain.

In his essay, A Basic Human Approach to Happiness, Br. David Steindl-Rast writes: “the one basic condition of the human psyche that accounts for genuine happiness is living in the now.”

for true happiness
live in the moment, the present
with wonder and joy

A healthy haiku habit can bring you incremental happiness by establishing strong relationships and meaning in your life.

“Haiku is a healthy habit…a haiku sensibility, a haiku heart and mind can bring you healthy incremental happiness by establishing relationships and meaning with the near infinite forms and life forms in our world,” says Tom Clausen.

If you can take time to slow down enough to truly notice the little things in your life and make the effort to capture them in a journal as short Haiku poems, happiness won’t be an elusive pursuit.

Dr Robert Epstein, a psychologist at the University of Harvard says, “a good haiku can work wonders on a tired soul.”

To appreciate the little details of life and capture your emotions, you’ve got to pay attention. You have to actively observe the world around you.

Without the strict rules the traditional haiku, you should be able to write your own haiku in a journal.

A simpler version of haiku is called the lune.

You can find the true usefulness of haiku for everyday expression when you forget about the syllabus and focus on just the lines. Here’s another haiku:

“Absence of problems
does not lead to happiness.
Dealing with them does.”
― J. Benson, Haiku to Live By: Life affirming messages, to hearten your day

Start reflecting on your blessings and things you are grateful for in life.

Charles Dickens puts this well: “Reflect upon your present blessings, of which every man has many, not your past misfortunes, of which all men have some.”

Count your blessings, lucks, fortunes and everything good that happens every day. Each day, spend less than five writing about one or two positive experience that happened to you in the past 24 hours in the form of haikus.

Even when people succeed — make lots of money, accumulate prestige and accolades, or acquire things instead of experiences — they are often left feeling unsatisfied,” according to research.

Use haiku to open your mind to opportunities for experiences that can can make you happy. Exercise your brain for happiness, and over time, happiness will become a habit.

Delightful words
An expression of yourself for yourself
HAIKU!

With time and practice, you install experiences of gratitude, calmness, and feeling that there’s a fullness in your life rather than an emptiness.

This post was previously published on The Startup and is republished here with permission from the author.
—