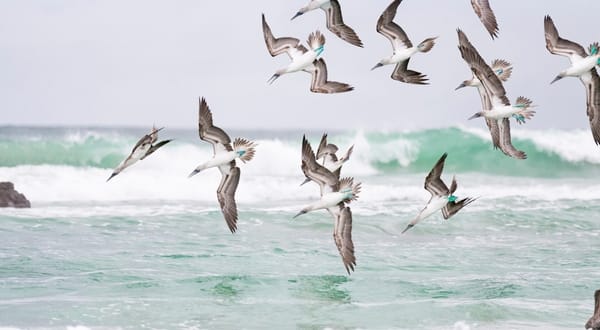 —
The seas are rising. Ocean winds and waves are growing in speed and force. The oceans could be feeling the heat.

LONDON, 1 May, 2019 − The great swells of the Pacific are beginning to swell even more as fiercer ocean winds and waves leave their mark. The breakers that crash on the storm beaches now do so with greater force. The white horses are gathering pace.

A 33-year-study of data from 31 satellites and 80 ocean buoys has confirmed suspicions. The extreme ocean winds are now fiercer, and the waves are getting measurably higher.

It is a given of global warming that as average planetary temperatures rise, then more energy is available for storm, rainfall and drought.

In the past century, because of ever-increasing combustion of fossil fuels that release growing quantities of greenhouse gases, average global temperatures have crept higher by 1°C and in three decades the speed of extreme winds in the Southern Ocean has increased by 8%, or 1.5 metres per second. Extreme waves have increased by 30cms, or 5%, over the same period.

“These changes have impacts that are felt all over the world. Storm waves can increase coastal erosion, putting coastal settlements and infrastructures at risk”

“Although increases of 5 and 8% might not seem like much, if sustained into the future such changes to our climate will have major impacts,” said Ian Young, an engineer at the University of Melbourne in Australia

He and a colleague report in the journal Science that they reached their conclusion on the basis of 4 billion observations made between 1985 and 2018.

“Flooding events are caused by storm surge and associated breaking waves. The increased sea level makes these events more serious and more frequent,” said Professor Young. “Increases in wave height, and changes in other properties such as wave direction, will further increase the probability of coastal flooding.”

Sea levels have been creeping ever higher, in large part because of the retreat of most of the planet’s great glaciers and the ever-increasing meltwater from Greenland and West Antarctica, and also as a simple matter of physics: as the oceans warm, the waters become less dense and sea levels rise.

Surfers and pleasure-seekers began to worry about the impact of global warming and climate change on wave patterns years ago. But seemingly simple phenomena such as the effects wave height and wind speed have in the open oceans on a world-wide basis are harder to measure.

Spanish oceanographers reported earlier this year that they were sure that ocean waves were gathering in force and strength, and European engineers have warned of the impact of more intense storms backed up by rising seas on the Atlantic ports and coastlines of the continent.

But there are problems: precision measurements have been made only recently. Oceanographers cannot be sure that they are not witnessing a natural cycle of ocean change, in which storm intensities slowly vary over a pattern of decades.

But the Australian engineers report that they are now 90% confident that they can measure ocean change: violent storms now arrive with higher wave crests and more dangerous winds than they did in 1985, and although this is true worldwide, the effect is most pronounced in the great ocean that swirls around Antarctica.

The next challenge is to make estimates of how much more violent the worst sea storms are likely to become later in the century, as planetary average temperatures – and sea levels – continue to rise.

“These changes have impacts that are felt all over the world. Storm waves can increase coastal erosion, putting coastal settlements and infrastructures at risk,” Professor Young said.

“We need a better understanding of how much this change is due to long-term climate change, and how much is due to multi-decadal fluctuations or cycles.” − Climate News Network

This post was previously published on Climate News Network and is republished here under a Creative Commons license CC BY-ND 4.0.
—