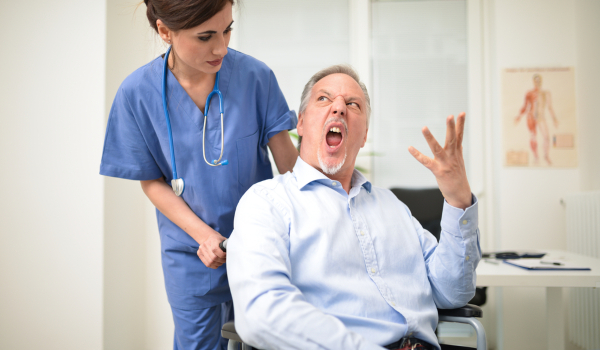 I witnessed something sad at a D.C. street fair recently. A smiling boy, all of six or seven years old, asked a face painter to turn him into a blue and purple butterfly.

“No, you’re not going to be a butterfly,” said his mother.

“But why?” the boy asked, his smile fading into confusion.

It wasn’t exactly abuse, but it was a glaring example of so-called “toxic masculinity.” Presumably, the mother thought her son should want to be fierce and aggressive rather than radiant, harmless, and feminine, like a butterfly.

Like all ideology, toxic masculinity is not natural but socialized —we learn it from other people. Many children—especially boys— receive messages from adults that lead to behaviors such as suppressing emotions, acting tough no matter what, and anti-femininity (“No, you’re not going to be a butterfly.”) If that doesn’t resonate with you, think of your conditioning. Maybe you have body image issues or you’re a perfectionist or you’re addicted to work. We all have patterns of behavior that we learned from others or developed to cope with challenging situations when we were children.

Mindfulness wakes us up by making us conscious of this unconscious conditioning. It drives a wedge between our thoughts and the thinker of those thoughts, our awareness. When we witness thoughts from a distance, we no longer have to identify with them. They’re no longer me—they’re stories forced on to me or that I took on to protect myself.

Awhile back, I visited my grandfather who was in the hospital with pneumonia. A nurse walked into his room and began to remove a breathing tube taped behind his ears.

“What are you doing? You’re hurting me,” he yelled. “Idiot!”

I’d never seen him scold someone outside the family. The nurse, a young Latina woman, was being gentle, yet confident. I wanted so bad to tell him to shut up and appreciate that she was trying to help. Instead, I decided to let the situation play out to see what happened. I watched what thoughts and emotions were coming up inside of me. There was anger—a baseball-sized fireball in the center of my chest—but I also realized how lonely and afraid he must feel, having been plugged into machines for days.

I also admired the nurse. She stayed calm through what must’ve been a two-minute temper tantrum. I pulled her aside as she left the room to apologize for his behavior and ask if there’s anything I could do.

As my grandfather had become angrier, I’d tensed up with my own anger. My mind tried to put out the fire by flooding with reactions and stories about being a “real” man, i.e., toxic masculinity: why can’t he ever calm down? He’s such a dick. I’m weak for not defending the nurse. But mindfulness allowed me to see that telling my grandfather to shut up would’ve just made things worse. We would’ve gotten in an argument. I would’ve left the hospital feeling horrible for yelling at an old, feeble man. The nurse might’ve felt that I was questioning her professional ability.

Instead, I was able to let the judgments and emotions pass. I released the mental chatter and relaxed my body. The fireball in my chest was just another phenomenon alongside the medical device beeps, boops, and swooshes—it wasn’t overwhelming. This allowed deeper, more skillful thoughts and emotions to appear in my mind, thoughts and emotions more aligned with who I really want to be.

I’ve still got a long way to go in becoming conscious of my toxic masculinity, but I’m grateful to have found a practice—meditation—to help me along the path.

I’m sure the mother at the street fair was just trying to protect her son from bullying—perhaps unconsciously. But that’s the point.

Like most unhealthy behavior, toxic masculinity is an attempt to protect ourselves when we feel vulnerable. Anyone would feel uncomfortable in front of an old man yelling at a nurse. It’s just that, because I have a male body, I’ve been socialized to handle discomfort by being a “real man,” by expressing my anger, taking charge, and fixing things.

The point is, we all have these types of behaviors. Habits. Addictions. Things we don’t like about ourselves. Unhealthy ways of relating to partners, parents, children, and friends.

What we’re responsible for is trying to become conscious of them. Otherwise, we hurt people—including ourselves.

This post was previously published on JeremyMohler.blog and is republished here with permission from the author.

Facebook31TweetPin2EmailShares33
wpDiscuz
0
0
Would love your thoughts, please comment.x
()
x
| Reply
Share this ArticleLike this article? Email it to a friend!
Email sent!