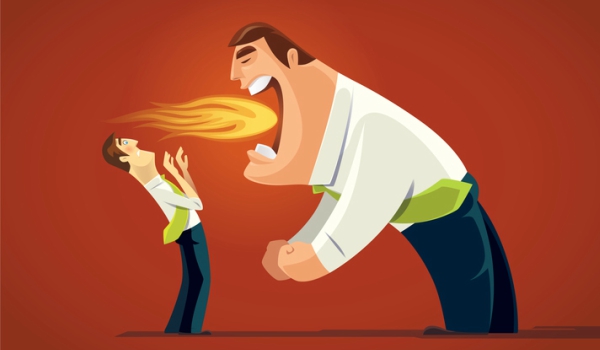 I have difficulty expressing my needs, for fear of becoming angry or receiving anger from others.

I am worried that if I ask for what I want, I will upset someone else. Which in turn will upset me? So, in the interest of keeping the peace, I will keep schtum. But inside, deep down, I will build frustration, resentment and anger. Plus, people will ‘breach’ boundaries I never got round to expressing — leading me to become resentful, and invariably, some sort of conflict will occur. Often, externally, it will look like ‘they’ are to blame, when I’m really a participant in the whole circus.

Often, I don’t know what I want until I encounter what I DON’T want, which makes me angry.

Cue the vicious cycle. (See Issue 1) Having not established my boundaries, I inevitably express my needs later on the piece, angrily — helping to generate the conflict I had been so keen to avoid in the first place.

My fear of anger is wrapped up in the fear of conflict.

There’s a quote from Cheryl Richardson that says it all: ‘If you avoid conflict to keep the peace, you start a war inside yourself.’

I grew up ‘knowing’ that being angry was not ok.

I have been told repeatedly throughout my life, by society, by the media, by friends and family, that you ‘mustn’t be angry.’ For a long time, I believed that ‘I didn’t get angry.’ That I controlled it, I had it in check. If it did appear, I would push it away, somewhere, anywhere. Mostly inside. It’s only as I got older that I realized, like everyone else, I got angry. I started to discover where in my body it would get stored, and how this has affected me, in my life, in my relationships, etc.

I heard, and hear ‘you should do something about your anger’ a lot. No-one ever taught me what, exactly.

Growing up, we were never advised what to do when we were angry, how we could support ourselves, transform it, manage it healthily. Invariably, it seemed to just make other people angry (which, of course, anger does — when not dealt with consciously).

I experienced anger as an expression of power.

Anger was scary, threatening, and often gave the impression of having some access to power. I’ve since learned it’s not usually an expression of power, but often the lack of it.

I learnt, as a boy, as a man, anger was not welcome.

I learnt that it was scary, threatening, dangerous, not allowed. That it was also, somehow, part of ‘the essence’ of being a man, which I/we should be ashamed of. By association, that man’s anger often leads to violence and destruction. There is a sense it should always be ‘nipped in the bud.’

I am scared of anger in others, but also in me.

I push it down. I disown it, push it away. I’m fearful of expressing it when it first appears, so it only grows in intensity.

Do any of these issues resonate with you?

Do you have any other anger issues to add?
— —

How can we deal with anger issues?

Anger is not an exclusive domain for men, of course, but it presents particular challenges for us to come to terms with.

It is not surprising that the talks and teachings of Jordan Peterson have gained such prominence, and resonated so deeply with many men. He speaks often about the fundamental desire in men to acquire meaning and purpose in their lives, and the acknowledgment of steps they need to take to do so — which he suggests is to harness and embrace the ‘shadow’ sides of themselves, in order to access their full power and presence. He suggests this process supports a deeper desire in men to access an integrated power, in order to make more of themselves, and a greater contribution in the world.

The first challenge is to get in touch with our anger, and inner frustrations. To ‘own’ these feelings, in order to gain understanding, acceptance, and liberation from them. Often, even the invitation to connect with our anger can be challenging — and will often raise one or more of the ‘issues’ listed above.

The next challenge is to find healthy, constructive ways to express or transform it.

Facebook23Tweet1PinEmailShares24
wpDiscuz
0
0
Would love your thoughts, please comment.x
()
x
| Reply
Share this ArticleLike this article? Email it to a friend!
Email sent!