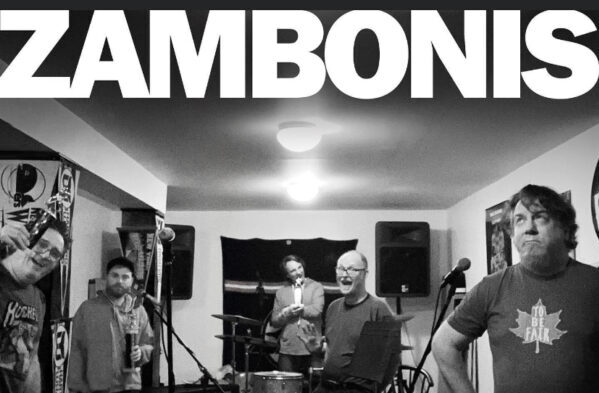 My other car is a Zamboni.

“Our goal (sorry) from the earliest days of The ZAMBONIS was to somehow write songs about hockey that did not stink.”    So says Dave Schneider, lead singer of this legendary band.  As taken from their website (https://thezambonis.com/),  The Zambonis formed in 1991 when defenseman/guitarist/singer Dave asked brothers Tarquin and Peter Katis if they wanted to start a group that played nothing but songs about hockey.  After writing new songs, especially “The Referee’s Daughter,” the band realized hockey songs can be about hockey, life, love and hockey. Not just hockey.

While well known in the Hockey world (they’ve played at NHL All-Star Games, Stanley Cup Parties,  and many other pro-league events, including in Europe), the northeast-based group is relatively unknown in the minds of folks who don’t follow the sport.

Or worship it.  Like my friend Robert Schaab.  He’s a college chum and loves hockey and loves The Zambonis.  In fact, it was he who introduced me to the band in the mid-90’s, at a gig they did in their native Connecticut.   I was skeptical about going, and, honestly, quite confused about what a “Hockey Band” might sound like.  I didn’t have high (stick) expectations, that’s for sure.  But it turned out to be one of the most blissful live music events of my life.  Not only did I dig their original hockey-themed songs, but once the “official” part of their set was over, and the club was more or less closed, they came back and played covers of 80’s punk/alternative songs for friends long into the night.   Being a fanatic of the genre, I was hooked.

And so flash forward many years, and through the miracle (on ice) of Facebook, I became re-connected with Dave after many years.  And what I’ve most enjoyed about this rekindling is messaging and commenting to each other on music, the band and the 80’s.  From this exchange came an idea for this column, (beware, even more puns coming!) to ask Dave to give “slap-shot” reactions to random subjects (picked by the before mentioned Robert) related to hockey, music, his band, and life.  I hope you enjoy Dave’s responses, and, more importantly, feel empowered to search out and listen to, while wearing a goalie mask or not, a Zambonis song or two.  Some links are below to find the good stuff.

So let’s drop the puck and start:

Dave:  There are very few modern pop songs that one wants to listen to for over four minutes. Television’s “Marquee Moon” comes to mind. Also, David Bowie’s “Heroes.” Another one that stands out to me is the 12-inch vinyl extended mix of “Wishing (A Photograph),” by The Flock of Seagulls. The Zambonis dreamt of joining the elite “long song club,” and found our subject: “Hockey On The Moon,” which is the last song on our first record. It’s a seven-minute opus about the Cold War, the race to the moon, and the 1980 USA hockey team – written under the influence and ‘mesmerization’ induced by said Flock of Seagulls pop opus.

Dave: Drummer for Def Leppard, Rick Allen: the ultimate short-handed goal, who lost his left arm in 1984 but continued with the band for what would be its most successful “triumphant phase.”

We penned a short and deep ditty called “Whirlwind”. The only song of ours that makes no reference to hockey but is about the struggles of the life of the “enforcer,” or as many refer to as the “goon.” This one’s for you, John Kordic.

When a coach tells the team to forecheck, the objective is to get the puck back in your possession. Too bad bands from the 80’s, and /or all bands, didn’t have a coaching staff. A good manager is great, but I think The Talking Heads could have used a coach. “David, get your head in the game and get in that creative zone/room with Tina, Chris and Jerry”.

If sitting at a fine establishment‘s bar in NYC and a song from the 80’s represented the finest bourbon from the tippity top shelf, that would be “Avalon” by Roxy Music.

Not only is the Zamboni machine one of the coolest inventions ever, but it also begins with the rarely used, shy, but strong letter Z. Please meet the greatest use of alliteration in sport: Zarley Zalapski. Favorite alliteration-based band from the 80’s? Talk Talk. “It’s My Life” is a classic, but their whole catalogue runs deep as the ocean.

Bringing it back to The ZAMBONIS here. Hockey songs can be about many things. Perhaps a song about holding a marriage, band or a team together? About being a leader, thinking of others and in general carrying the weight and wearing the C on the chest of life? However, you listen to your music these days, give “Captain” by The ZAMBONIS a spin.

The cold sounds of early 80’s synth bands warmed the circuits of my soul. Close your eyes and imagine cutting the sleeves off of your sweatshirt, putting on your fingerless gloves. You pick up a mixtape with your writing in blue pen on the sticky label, it says “Winter Classic Vol 1”. It’s a Maxell II. Stick the tape in your Sony Walkman, open the front door to your house, you can see your breath and you start to walk to a friend’s house; press play.

Down in the Park. Gary Numan

In My Room. YAZ

Time Out For Fun DEVO

Every time that amazing Zamboni machine rolls into the rink, it creates a new, near-perfect sheet of ice. Every day of our lives, we ZAMBONIS dream of creating and writing a near-perfect pop song. Zamboni and we ZAMBONIS will never stop working at our craft.

Connect with the Zamboni’s and their songs here:

29 years, EVERY song about hockey 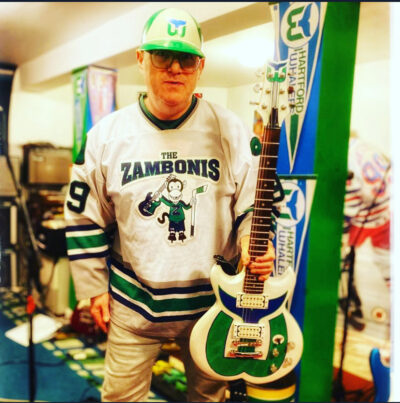 FacebookTweetPinEmailShares167
wpDiscuz
0
0
Would love your thoughts, please comment.x
()
x
| Reply
Share this ArticleLike this article? Email it to a friend!
Email sent!